You're just dumb – so says Newsweek about Obama critics

Editor’s Note – Once, if you were a critic of Barack Obama, you were a racist, now, your just dumb according to Newsweek. As Bob Beckel from “The Five” on Fox News tells us, the main stream media has been more critical of Obama than any previous President. Yes, its true and they printed it, or said it live on television.

Is it really even a question anymore that the main stream media is a wholly owned subsidiary of the Democratic (Socialist) Party? At one time, it was just puzzling, then it became apparent and it was hard to figure how Americans still swallowed the tripe, now…well, you really have to be mentally challenged, or like Beckel, you’ll say anything for your side.

Newsweek’s cover should be listed as a political cartoon company, certainly not journalism!

NEWSWEEK: Why Are Obama’s Critics So Dumb? 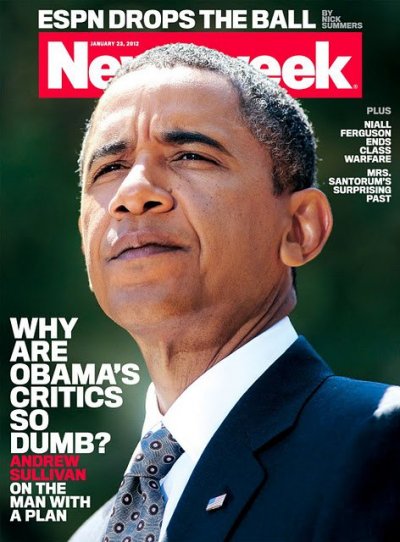 Obama’s approval rating has been averaging about 44 percent this month. Not exactly lighting the world on fire.

And so, Andrew Sullivan and Tina Brown have teamed up to anger everyone with Newsweek’s cover story, “Why Are Obama’s Critics So Dumb?”

Basically, Sullivan is charging conservatives with being insane. Similarly liberals that expected Obama to actually close Guantanamo Bay, not fight any new wars, and rout the American right, are being Utopian dreamers.

Here is the key line:

But given the enormity of what he inherited, and given what he explicitly promised, it remains simply a fact that Obama has delivered in a way that the unhinged right and purist left have yet to understand or absorb.

But Sullivan overstates the case. By just the seventh paragraph, he says something very misleading:

The job collapse bottomed out at the beginning of 2010, as the stimulus took effect. Since then, the U.S. has added 2.4 million jobs. That’s not enough, but it’s far better than what Romney would have you believe, and more than the net jobs created under the entire Bush administration.

Here he is comparing “gross jobs” under Obama during the recovery, to the “net jobs” number under Bush. Bush left while the economy was shedding jobs. But Obama’s recovery has added jobs, but at a slow rate and with a shrinking workforce.

Sullivan makes some claims that are just bizarre. “You’d think, listening to the Republican debates, that Obama has raised taxes,” he writes.

Why would you think that? They’re all against tax increases, but having watched all the Republican debates, I can only remember them saying that Obama has done a lot of spending. And without cutting spending there will need to be tax increases.

Sullivan isn’t entirely wrong either. Critics of Obama on the right have been wrong when they’ve said he has “apologized” for America or appeased its enemies. The guy sent planes into Pakistan and deep-sized Osama Bin Laden. He approved a war on Libya (even if they dressed it in humanitarian clothes). He surged in Afghanistan. And he kept to the timeline of withdrawal in Iraq that had been set by George W. Bush and Nouri al Maliki.

Fundamentally Sullivan simply takes the most exaggerated complaints about Obama and makes them contradict each other. It is true that Obama can’t be completely an empty-suit who is totally incompetent, while at the same time being a malicious figure working effectively to destroy America.

But someone can be incompetent at some tasks, and too ideological in other tasks.

And if you filter out the most insane things said about Obama there is a line of criticism that seems pretty smart. Here’s how it goes:

Barack Obama has always wanted to fit in. And has partially treated his journey to the presidency not as a political venture but one of personal discovery.

Upon entering office, instead of focusing on a jobs issue, he ditched all of his bipartisan rhetoric in order to get his health-care reform passed. To do so, he essentially threw out his promise to keep lobbyists from power and he cut deals with the insurance and drug industries that guarantee them customers and near monopoly pricing. His deal included all number of gimmicks to “juice” the savings numbers and hide the costs. It introduced almost no price competition into health-care meaning that health-care will continue to consume more and more of the economy.

The same kind of cronyism that poisoned his health-reform also invaded his handling of the financial crisis. This led not just to bailouts but the increasing concentration of financial power in the big six banks, setting up the system for another round of bailouts in the future.

At some point, the top players in lots of sectors in the American economy, in education, finance, military-industry, or health-care are operating less and less in a free market, and more and more in government licensed cartels.

In one sense there is a reason why critics of Obama on the right and left seem to contradict each other. At times we really do seem to be getting the worst of both worlds. The middle and working classes get the heartless layoff notices of capitalism, while the richest see their losses “socialized” away.

It’s a problem Obama did not invent, but one he has intensified. And it isn’t “dumb” to say so.