By TIM STICKINGS FOR MAILONLINE

Chinese medics have been secretly filmed admitting they knew how dangerous the coronavirus was when it began to wreak havoc in Wuhan – but say they were told to lie about it.

Medical professionals in Wuhan say they knew about virus deaths as early as December 2019, but it was mid-January before China first informed the WHO of a fatality.

They also realised that the virus was passing between humans, but hospitals were told ‘not to tell the truth’ and calls to scrap Lunar New Year festivities were rejected because authorities wanted to ‘present a harmonious and prosperous society’.

The new testimony, which will be broadcast tonight in an ITV documentary called Outbreak: The Virus That Shook The World, flies in the face of China’s denials that it covered up the epidemic in its earliest days.

It comes amid growing pressure on China after a WHO-backed panel said on Monday that Beijing was too slow to respond to the outbreak, days after the US published new claims suggesting the virus could have leaked from a Wuhan lab.

The video also adds to a growing body of evidence that China lied to the world about the early stages of the coronavirus outbreak, allowing it to balloon into a global pandemic. 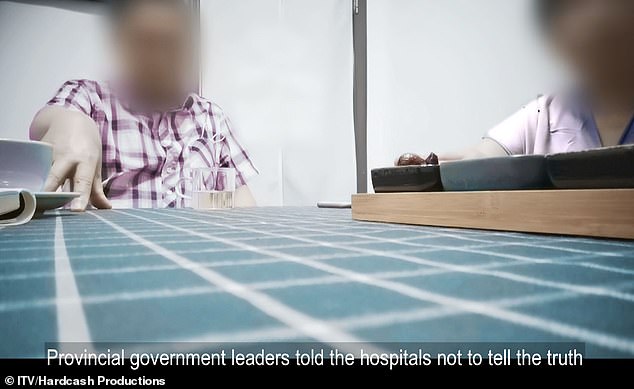