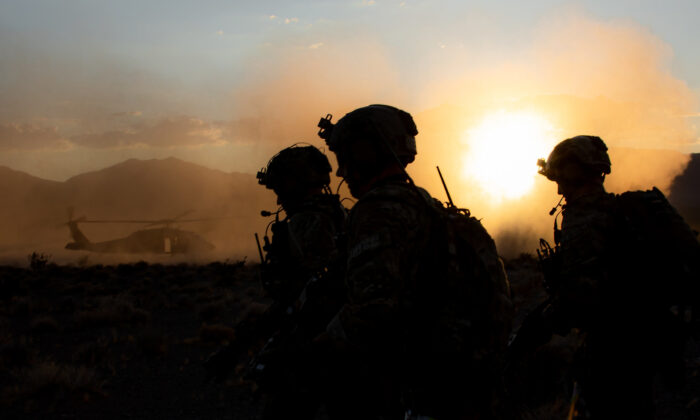 Adherents of the “woke” political undercurrents of the progressive left have climbed their way into U.S. military leadership, eroding its combat readiness through a culture of political correctness, according to an active-duty Army officer.

Working in various high-profile roles within the organization, the officer has observed over the past decade the increasing politicization of the military. He didn’t blame any individuals or groups, but rather a series of circumstances that have fostered such an environment.

The problems he pinpointed aren’t so much in what is being done, but rather how it’s done. Superficially, the military still functions as it should, but looking beneath the surface, one discovers that it has become unfocused in its priorities.

The officer spoke on condition of anonymity out of concern of reprisals.

Coming from a long tradition of military service in his family, the officer was brought up with traditional religious and patriotic values. His immediate drive to enlist “as a very young, naïve, and immature child,” followed the 9/11 terrorist attacks and was fueled by the desire to take out the evil people responsible, he said.

The War on Terror, mainly the Iraq and Afghanistan wars, served as a catalyst of change as the protracted conflict led to the retirement of the military leaders who were the “torchbearers” of the traditional military culture, he said. The new blood was often fast-tracked to higher ranks with mixed results. Some exceptional leaders were able to quickly assume authority. But many officers didn’t get enough time to mature into their positions, he observed.

Meanwhile, as woke ideologies spread through society, new recruits weren’t necessarily arriving with the same level of patriotism as their predecessors, he said.

“All of the woke movement in America as a whole very much timeline-wise coincides with that of the military,” he said.

In addition, the generals adopted a practice of broadcasting information about their war operations almost in real-time through mainstream media. While this allowed for greater transparency, it also placed the upper ranks under unprecedented political pressure.

“You had the opportunity to second-guess and armchair-quarterback our military leaders,” the officer said.

Around 2012, the officer noticed things started to change.

“You saw a shift on politics bleeding down … fully engorging the lieutenant colonel ranks down into the major ranks and then into the company level ranks, and it’s done nothing but get worse since then,” he said. “Now, politics is more the job of an officer than not, at every level.”

The military was going through changes that, on their face, were beneficial, but political considerations skewed their implementation, he said. Allowing women into combat positions, ending the “don’t ask, don’t tell” policy, and finally allowing transgender people to enlist all allowed the military to look for the most competent individuals regardless of their background, in his view.

But these moves required cultural, logistical, and even health care accommodations that needed to be weighed against the war-fighting benefits of bringing in any such individual. All these should have been carefully considered, yet those conversations couldn’t fully take place because of the political baggage attached to the moves, the officer said. They were imposed top-down because the political climate primarily demanded them in the name of “progress,” rather than to aid the military’s mission.

The military now has developed a whole lineup of politically charged institutions, be it equal opportunity programs, anti-discrimination programs, anti-sexual harassment programs, and some of the training mandated under Army Regulation 350-1, he said.

While in theory, these are beneficial, in practice they’re driven by political priorities that render them useless or even harmful, he said.

The inordinate focus on political implications has created a “very risk-averse culture,” in which one needs to maintain “the perception” of perfectly toeing the line “regardless of what the facts are,” he said, following that otherwise, “you’ll have your career destroyed.”

As a consequence, “you found a lot of leaders doing horrible things” to maintain the image of having a politically pristine record, he said.

He remembered one colleague of his who was merely mentioned in a sexual harassment complaint by a person he’d just kicked out of the Army. Though the colleague wasn’t personally accused of harassment, his promotions were put on hold while the investigation into the complaint took years instead of the usual months to resolve. The man’s career was de facto crippled by then.

“The reaction was knee-jerk” because the political climate made sexual harassment an explosive issue, the officer said.

“When you are brought into association with these radioactive programs, you are treated as guilty until proven innocent,” he said.

The AR 350-1 training exemplifies the cultural shift from substance to appearances, in his view.

The battery of 14 online classes, with some as long as four hours, cover everything from terrorism awareness, cyber security, and employee safety to equal employment opportunity and anti-harassment policy. Some are only required once, others are required annually.

“In theory, the concepts behind them are sound,” the officer said, but they have been pushed from the top as political mandates, without bothering to check whether there’s time to actually complete them.

“If you followed the recipe to the T, you would do nothing else in your day-to-day life at work other than this training,” he said. “There’s not enough hours in the day to complete it while doing your normal job.”

Indeed, there are many things that make sense for the troops to do, but the military has traditionally embodied efficiency—it needs to prioritize.

When a colleague of the officer brought this issue to his supervisors, he was flatly rejected.

Thus, any such training “gets thrown into the mix of normal day-to-day operations” with predictable consequences.

“People find ways to circumvent the framework to get them done faster,” he said.

The training video, for instance, would play in the background while the troops do other work. For the test, they simply copy the right answers from the key or have them memorized. Sometimes, there’s no time to do the training at all and the completion certificates are faked, he said.

However, that fosters a culture of low standards, where troops get used to completing tasks pro forma or doing the bare minimum to check a box.

“It’s basically, ‘I just show up to work, I do what I’m told, and I just nag away at my list of things and make sure that it all gets done,’” the officer said.

“So you’re not focused on the true mission set of what a military is supposed to do.”

Such a culture has infected warfighting as well, he said.

For example, twice a year, each soldier has to pass physical fitness and shooting proficiency tests. But merely passing isn’t “indicative of the proficiency required to effectively or efficiently and appropriately be able to do your job,” he said.

“So it very much enables a mentality and culture of the minimum standard is appropriate because we need to have numbers of quantity more than quality.”

The generals can cover their backs by claiming everything is in order on paper. But if Americans learned what the troops’ “levels of general fitness and the levels of general proficiency with their weapons systems” have become, they “would not feel very comfortable,” the officer said.

As it turns out, the “woke” thrive in this climate, embracing political correctness and rising through the ranks, while the traditionally minded, who are still likely the majority, get discouraged and tend to leave early.

“The amount of company-grade officers who complete their first four years of service and leave as a captain … is huge,” he said.

This is reflecting the cultural trend in broader society.

“Nowadays in America, having national pride is looked at as being evil. … Having any type of moral background in ethics and traditional values, which often is based in religion, is being destroyed,” the officer said.

The COVID-19 vaccination mandate announced earlier this year could just be the last nail in the coffin of traditional military values, he said. The debate around the vaccines has become so politically charged that their acceptance or refusal could, to a degree, serve as a litmus test to sort the compliant ones from objectors toward the broader cultural shift in the military.

Before, company-level officers were the ones granting vaccination exemptions. That authority has now been lifted all the way up to the surgeon general.

“It is being used as a vehicle to target those conservative-minded individuals that have strong religious opinions, or are free thinkers, or just don’t see the need, or whatever, but they hold more conservative values,” he said.

“This is just an opportunity to use regulation and the vehicle of the shot to weed these people out because those same people are the naysayers or those that are providing pushback to the ‘wokeism’ invading the military.”