Editor’s Note – Eric “With-Holder” is loathed by those who have to deal with his moronic law suits and the administrations mis-management of immigration issues. His handling of the Brian Terry death and “Fast and Furious” has eroded all semblance of respect for him and they want him out. If you cannot rely on your bosses, you are basically cannon fodder, and the Border Patrol is on the front lines with no back-up.

By Jerry Seper – The Washington Times

The National Border Patrol Council, which represents all 17,000 of the agency’s non-supervisory agents, called for the resignation Monday of Attorney General Eric H. Holder Jr. for his role in the botched “Fast and Furious” gunrunning operation that resulted in the death of a U.S. Border Patrol agent. 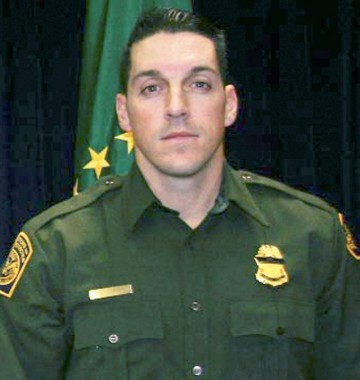 Council President George E. McCubbin III, a 25-year Border Patrol veteran himself, described Mr. Holder’s actions in the case as “a slap in the face to all Border Patrol agents who serve this country,” adding that the attorney general has shown “an utter failure of leadership at the highest levels of government.”

Two semi-automatic AK-47 assault weapons found at the scene of the Dec. 15, 2010, killing of Border Patrol Agent Brian A. Terry were traced by the Bureau of Alcohol, Tobacco, Firearms and Explosives (ATF) to “straw buyers” who bought the weapons as part of the Fast and Furious investigation.

Agent Terry died during a gunfight with heavily armed Mexican bandits along the U.S.-Mexico border south of Tucson. More than 2,000 weapons purchased during the ATF-led Fast and Furious operation were “walked” to drug smugglers in Mexico. More than 600 of them are still missing.

Mr. McCubbin said Border Patrol agents are indoctrinated from day one of their training that “integrity is their most important trait … and that without it, they have little use to the agency.” He said agents who lie or show a lack of candor are quickly disciplined.

“The standard that applies to these agents should at a minimum be applied to those who lead them,”Mr. McCubbin said. “If Eric Holderwere a Border Patrol agent and not the attorney general, he would have long ago been found unsuitable for government employment and terminated.

“The heroism that Border Patrol Agent Brian Terry demonstrated on that cold night in the desert of Arizona was in keeping with the finest traditions of the United States Border Patrol and will never be forgotten by those who patrol this nation’s borders,” he said.

Mr. McCubbin said the “political shenanigans” surrounding the Fast and Furious operation and “passing the blame” must stop.

He noted that a Border Patrol agent cannot accidentally step foot in Mexico without myriad U.S. and Mexican government agencies being made aware, so Fast and Furious had to have been conducted with the knowledge and tacit approval of the Justice Department and the Obama administration.

“It is time for Attorney General Holder to show the least shred of responsibility and leadership and resign his post,” Mr. McCubbin said. “Border Patrol Agent Brian Terry deserves nothing less.”

Last week, Mr. Holder told the Senate Judiciary Committee he had “no intention” of resigning, adding that he heard the White House press officer say the president has “absolute confidence in me.”

His defiance came after Sen. John Cornyn, Texas Republican and a senior Judiciary Committee member, called on him to quit, saying Mr. Holder had failed “the basic standards of political independence and accountability” in determining who knew about or approved the “walking” of guns into Mexico.

“Americans deserve an attorney general who will be honest with them,” he said.

The lawsuit was announced Monday by Judicial Watch spokeswoman Jill Farrell, who said CBS News reported that Fast and Furious documents released by the Obama White House in September 2011 “show extensive communications” between ATF officials and Mr. O’Reilly. She said the requested records include a flowchart showing the ultimate destinations of the Fast and Furious weapons.