SUA Staff – It is likely no surprise to anyone that Harry Reid will not allow any budget to hit the Senate floor this year for 2013. After all, its been over 1,000 days since the Senate passed a budget, despite the fact that it is one of Congress’ most important duties. Apparently, we did not need one in 2010, 2011, and 2012, so why do one for 2013?

We would ask why, but we know the answer, Obama and the Democrats want to make sure that in this election year, they do not want anything to ruin the ruse they created that Congress is tied up because of the Tea Party wing of the Republican Party in the House.

A brilliant ploy, because the masses get confused easily when it comes to the budget, the debt, the debt ceiling, along with the lead anchors of Social Security, Medicare, and Medicaid. Just gut the military!

That plays into the hands of the Obama Campaign; keep them confused on difficult subjects, and feed them ‘baloney on rye’, otherwise known as class warfare and a re-directed focus.

Facts do not matter – only grandiose speeches filled with words like “fair”, “fat cats”, and “level playing field” will be heard from the left. Harry Reid is the master of double speak, and has never found a position he did not like as long as it promoted his “goal de jours”.

Why worry about some “stinking budget” when you have the Budget Control Act of 2011, conjured up on August 2, 2011. The same Act that the Democrat votes split right down the middle in the House so they could get the Republicans to pass it as a majority. How convenient! Imagine, a Federal Government that has no actual budget…wait, that’s what we have, how convenient indeed!

Don’t look behind that curtains America, its not pretty, and the left has hung some very pretty curtains to gawk at instead.

Reid: This year’s budget is done 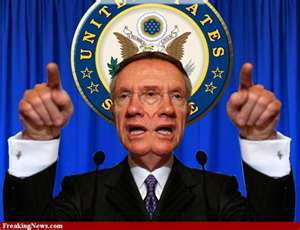 Senate Democratic leaders said they don’t expect a fiscal 2013 budget to reach the floor this year because spending levels were set last summer under the debt-ceiling agreement.

“We do not need to bring a budget to the floor this year — it’s done, we don’t need to do it,” Senate Majority Leader Harry Reid (D-Nev.) told reporters on Friday, echoing previous statements from his office.

Reid and Sen. Charles Schumer (D-N.Y.) argued that the debt-limit agreement in August directs spending for the next year and that Senate Appropriations Chairman Daniel Inouye (D-Hawaii) has already asked the heads of the subcommittees to write their appropriations bills for fiscal 2013.

Senate Budget Chairman Kent Conrad (D-N.D.) has said he would probably mark up a budget resolution this year, but Reid said he didn’t expect any floor action on any measure produced by the panel.

A budget resolution serves as a blueprint for spending and isn’t signed by the president — it provides a broad outline for the Appropriations Committee for spending choices. The panel is required to follow the recommendations, although they tend to stick close to the overall discretionary spending figure.

Reid and Schumer said the outline already exists and an overall spending level is agreed to for the fiscal year 2013 bills. The committee will divide up $1.047 trillion in discretionary spending, with roughly half headed for the Defense Department.

The Pentagon is requesting $525 billion for fiscal 2013 with an additional $88.4 billion for overseas operations such as Afghanistan. This is decrease of $531 billion and $115 billion, Defense Secretary Leon Panetta announced last week.

Schumer said it is a “total falsity” for Republicans to say that Democrats haven’t passed the budget: “we passed it on Aug. 2.”

“They’re attacking us because they have nothing better to do,” Reid said. “They need something else to talk about.”