Editor’s Note – Some say that cutting small programs is only a drop in the bucket – it is, however, when totaled up, there is real waste – expensive waste. But its not just waste – its a mindset in DC that ‘pork barrel’ spending on such items is purely political. The goal is to be able to tell your constituency that you got something done while representing them – this does get votes.

The big problem is that the representatives that do real work – work that cuts the bloated budget, reduces our debt, and shrinks government to a more manageable level are rare. Now take that kind of success home to their districts and votes will come even faster. The old ways no longer work – we cannot borrow from China and elsewhere to pay for pet projects just so a representative can get more votes. Its time once again for ‘Statesmen’ to step up – step forward! 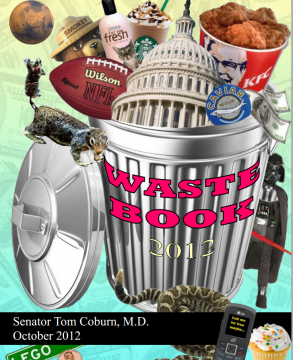 Times remain tough in America. The number of people working has dropped to the lowest level in decades. More than 23 million of our fellow citizens do not have good jobs, and wages for many others are stagnant and even declining. Families are struggling to do more with less. But not everyone in America is living on a smaller budget. Washington politicians don’t even bother to give themselves a budget anymore. For the third consecutive year, Congress failed to pass a budget. And, for the fourth straight year, these compulsive spenders charged more than $1 trillion to our national credit card, pushing us to a $16 trillion debt.

Some try to rationalize the excessive borrowing and spending as necessary until the economy gets back on track. But the increased demand for help is precisely why Washington must be more careful how tax dollars are spent to ensure we can care for those who are truly in need. To do this Washington must set priorities, just like every family. The problem is Washington has all the wrong priorities. 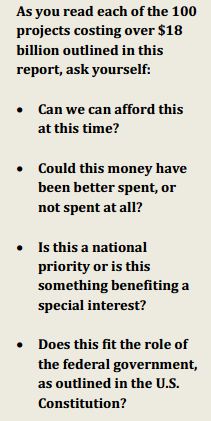 Thousands, millions and even billions of dollars in an annual budget in excess of $3.7 trillion may not seem like much to Washington politicians, but these days a dollar can make a big difference for families on fixed budgets. How many of our friends, families and neighbors could be fed with the nearly $1 million the government spent taste testing foods to be served on the planet Mars? How many nutritious school lunches could have been served with the $2 million in financial assistance provided to cupcake specialty shops?

Washington priorities are backwards. This is why important programs go bankrupt while outdated and outlandish projects continue to be funded The Highway Trust Fund, which has been bailed out several times over the last five years, is a good example, as billions of dollars intended for transportation are wasted on questionable projects that do little to fix congestion or other transportation problems. An unused Ohio bridge — not even connected to a road or trail — received a half-a-million dollar makeover this year. An Oregon town will pay $388,000 for just five bus stops – enough to buy two houses in the same town! And in West Virginia, thousands of dollars were spent to reconstruct a historic streetscape… out of Legos. Would the dollars spent on these transportation projects not have been better spent to fix some of the 22,158 deficient bridges plaguing our national highway system?

Perhaps nothing demonstrates just how out of touch Washington is more than the $300,000 USDA is spending to tell Americans to eat caviar, one of the world’s most expensive delicacies, at a time when millions of Americans are struggling just to put the basics on the family dinner table. It echoes back to the fabled proclamation of the callous royal who, when asked about the hungry and poor shortly before the French Revolution, replied “let them eat cake.”

This “let them eat caviar” attitude in Washington is evident in countless instances as the well-off are rewarded with the taxes paid by other hard-working Americans: In Los Angeles, a yacht used by city officials, celebrities, and other VIPs was upgraded for nearly half a million dollars. In Indianapolis, the costs of providing free bus service for the ticket holders attending the Super Bowl totaled almost $150,000. Wealthy tax cheats collected hundreds of millions of dollars in payments from a health care program for the poor, professional sports leagues were exempted from paying taxes, and the world’s largest snack food company benefitted from over $1 million in governments grants to support the multi-billion dollar company’s new Greek yogurt facility in New York.

These and the other examples of mismanagement, wasteful spending and special interest deals highlighted in this report represent missed opportunities to assist those in need and to shore up the nation’s finances. Washington spent much of the year deadlocked over whether to cut spending or increase taxes to address our fiscal crisis, all the while, allowing or even supporting these questionable projects. Each of the 100 entries highlighted by this report, therefore, is a direct result of Washington politicians who are preoccupied with running for re-election rather than running the country, which is what they were elected to do in the first place. As you look at these examples, put your personal political persuasion aside and ask yourself: Would you agree with Washington that these represent national priorities, or would you conclude these reflect the out-of-touch and out-of-control spending threatening to bankrupt our nation’s future? 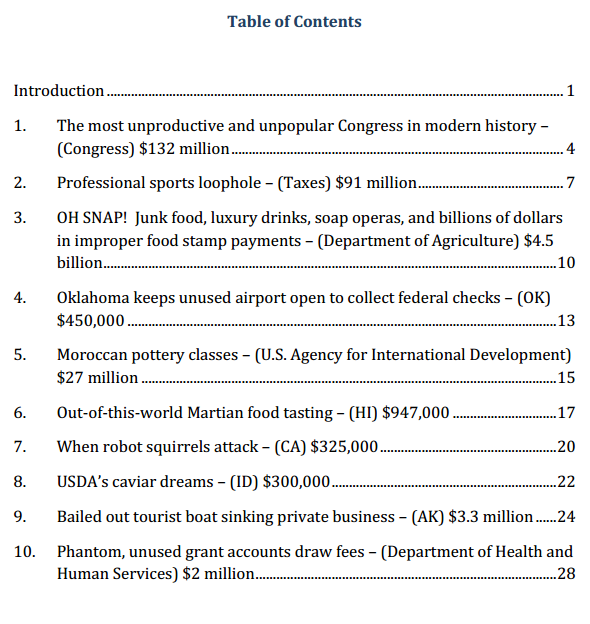