Editor’s Note – This election season is being called the most hate filled, divisive, and negative campaign – EVER! We still have almost 90 more days to go and the trend seems primed for even worse tactics and discourse – if you can call it that. Two things emerge above all the foam on the surface of this septic tank of rancor – “they all do it”, and “hypocrisy”.

The left accuse the right, and the right accuses the left – but on close inspection, “they all do it” fails under close scrutiny of scope, depth, and quantity, or as puts it, “Fair and Balanced” reporting. If you watch any segment on the so-called fair and balanced network, where someone from each camp emerges with their talking points – its unfair, and totally disingehuous to say they do things “equally.”

Segment after segment, the commentator treats both equally – as to say they’re arguments are equally valid – utterly straining credulity. Just once, it would be nice for someone like John Scott to say: “sir or madam, that is totally untrue, and you know it.” Then to allow the constant changing of the subject and/or bringing in some ancillary issue must stop, or they are guilty of aiding and abetting the propaganda and intentionally mis-leading the public. We dare anyone to prove that wrong – and guess which side we refer to?

Victor Davis Hanson once again nails part of the other cesspool denizen – hypocrisy:

Who gets a pass?

Chicago Mayor Rahm Emanuel recently said of the Chick-fil-A fast-food franchise that “Chick-fil-A’s values are not Chicago’s values.” Why? Because Chick-fil-A CEO Dan Cathy is on record as being opposed to gay marriage — as is close to half the U.S. population, according to polls. The mayors of Boston and San Francisco also suggested that the company isn’t welcome in their cities.

Oddly, none of these public officials have lectured President Obama to keep clear of their cities. Yet until recently, Obama was likewise on record as opposing gay marriage. Why the exemption?

Nor have the mayors in question disinvited any black churches from their cities. Yet some pastors in churches with black congregations have been quite loud in their denunciations of gay marriage. Fundamentalist Islamic mosques routinely disparage homosexuals, often publicly so in their literature. Is there something about white Christian males that makes their opposition to gay marriage different from that of their black or Muslim counterparts? 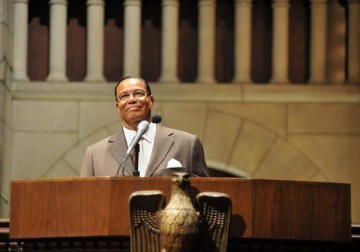 Louis Farrakhan speaks in Chicago - he is welcome with his vile rhetoric yet Rahm Emmanuel does not thing Dan Cathy represents Chicago values.

Even as Emanuel warned Cathy that his company did not reflect “Chicago values,” his own city remains among the most murderous in the world. This year, Chicago youth have killed more Americans than have the Taliban in Afghanistan. Unable to stop the carnage, a desperate Emanuel welcomed in Nation of Islam minister Louis Farrakhan to help quell the mostly black-on-black violence, even though the latter has a long record of racist and anti-Semitic tirades. Is the Chick-fil-A CEO a greater danger to Chicago than gun-toting gangs, or more illiberal than the racist Farrakhan?

Politics — not just race or religion — is also a key to the paradoxical double standard. Senate Majority Leader Harry Reid (D-Nev.) just slandered Nuclear Regulatory Commission member Bill Magwood, an African-American, as “one of the most unethical, prevaricating, incompetent people I’ve dealt with.” Reid, furious with Magwood because of his support for the Yucca Mountain nuclear repository in Reid’s state, also called Magwood a “treacherous, miserable liar,” “a first-class rat” and a “sh-t stirrer.”

In 2008, Reid condescendingly attributed presidential candidate Barack Obama’s success to the fact that he was “light-skinned” and spoke “with no Negro dialect, unless he wanted to have one.”

More recently, the crude Reid, in McCarthyesque fashion, claimed that Republican presidential candidate Mitt Romney had not paid income taxes for 10 years — based on a rumor that an anonymous source supposedly had passed on to him. “His poor father must be so embarrassed about his son,” Reid said of the late George Romney, Mitt’s father.

Reid has demonstrated that he is both vulgar and illiberal, but there are no calls for him to vacate his post. That exemption was not extended to an earlier counterpart, Sen. Trent Lott (D-Miss.). Lott, in similarly illiberal and crass fashion, said at Strom Thurmond’s 100th birthday party in 2002 that America would have avoided “all these problems over all these years” if Thurmond had been elected president in 1948. Lott was pressured by both the Republican Party and the media to step down, and he did so in shame.

There is a common theme here. Our self-appointed priests of fairness from time to time freely commit sins of intolerance. But don’t dare hold them to the same sort of accountability to which they hold other, less progressive Americans, whose similarly dumb remarks are not gaffes but rather windows into their prejudicial souls.

We must make allowances for the supposed Biblical conservatism of some black pastors in a way we cannot for the white, Christian CEO of Chick-fil-A. Farrakhan’s hatred cannot possibly earn him ostracism. We cannot extend the anger at evangelical Christians for their incorrect attitudes toward feminism and homosexuality to the Muslims who often share similar views.

Such selectivity is untenable. Classical Western liberalism was predicated on judging people as individuals — and on their merit and performance — rather than collectively as identity groups identified by gender, race and religion. Using illiberal means to advance supposedly liberal ends results not just in hypocrisy and cynicism, but in the current disaster of “Chicago values.”

Politically correct exemption is doomed, because who can sort out the conflicting agendas of various identity groups? Who certifies who’s really black, brown or white in a multiracial, intermarried America — Barack Obama or Elizabeth Warren? Who deserves how much compensation for which particular past oppression?

Can black pastors who oppose gay marriage be judged prejudicial? Is the Asian-American who opposes illegal immigration subject to the same charge of nativism leveled at so-called whites? Can Harry Reid be judged a bigot and McCarthyite if he claims he’s liberal?

A simple antidote to multiculturalism and political correctness is to evaluate all Americans on their actual behavior, regardless of their politics, race, gender or religion — in other words, a return to the ancient liberal idea that one common culture treats all sorts of different people absolutely the same.