US to leave a private army in Iraq

Yesterday, Iraqi Prime Minister Nouri al-Maliki set off for the United States, where he will meet with top American officials to discuss the future of the two countries’ strategic partnership following US withdrawal from Iraq, which is to be completed this month. Meanwhile, the State Department is deploying thousands of diplomats and private security guards to help Iraqi authorities maintain order.

The Prime Minister will meet with President Barack Obama, Vice President Joe Biden, Secretary of State Hillary Clinton, and US congressmen. The official agenda of the visit covers a wide range of topics – from security and energy, to education and the justice system. However, the main subject of discussions will be the new phase in the strategic partnership between the US and Iraq, which will now act as a fully sovereign state. 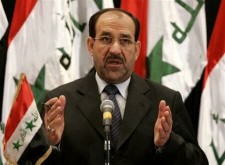 The US is expected to complete its full withdrawal from Iraq by the end of this month. Any remaining troops will either be packing their things, or patrolling Iraqi roads for roadside bombs and traps, so as to ensure a safe passage for convoys headed for the Kuwaiti border.

Currently, 6,000 US soldiers and officers are stationed at four bases in Iraq; following the withdrawal, there will be only 157 soldiers and 763 civilian Pentagon employees, who will focus primarily on training Iraqi forces. In particular, the instructors will assist Iraqis in the usage and maintenance of F-16 fighter jets and other US-made military equipment.

The total number of Iraqi troops and police has reached 900,000 people, a team large enough to independently maintain stability within the country. However, Iraqi forces are not yet ready to repel foreign aggression while controlling their airspace and territorial waters.

American officials initially planned to leave a limited contingent of troops in Iraq after the New Year, but these plans hit an unexpected obstacle after Baghdad refused to grant US soldiers immunity from prosecution. This means that, in the event of civilian death or injury, American soldiers will be tried in Iraqi courts, accepting any potential consequences. The Pentagon was not satisfied with this scenario.

Therefore, a contingent of 16,000 US diplomats and private security personnel will remain in Iraq, effectively ensuring an American military presence in the country. These “diplomatic” expeditionary forces – who are granted immunity from prosecution – will be stationed at four major (Baghdad, Basra, Irbil, and Kirkuk) and seven secondary sites resembling fortresses or military bases. At certain sites, the number of security guards will be twice that of the diplomats. Moreover, special companies are being hired to provide aviation support and to escort diplomatic convoys.

According to the Wall Street Journal, the projected cost of supporting such an extended diplomatic mission is nearly $3.8 billion. In any case, this constitutes major savings when compared to the $40 billion spent this year alone on military operations in Iraq.