Editor’s Note– Another breech of security measures and a failure of TSA to seize one of the very items they are tasked with preventing to be on board any aircraft, a knife. No real examination was performed by TSA of the passenger, which had the smell of alcohol, a knife, and a belligerent attitude. These are three markers to reconsider before passing the person to enter an aircraft. Later, a confrontation  ensued on the plane and the FBI was called in.

With all the furor over invasive, intensive, and inappropriate searching, what, what, what…TSA? 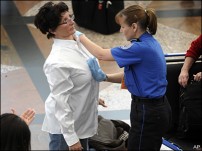 TSA Intensive searching - Yet man gets by with knife

Shortly after taking his seat on a Delta Air Lines flight from Salt Lake City to Las Vegas on Sunday, David Alan Anderson, 60, began elbowing the passenger next to him to “claim” the armrest, according to a federal complaint. He then put his foot on the passenger’s leg.

“Sir, you are going to have to move over,” the passenger told him.

About five minutes later, the passenger saw Anderson staring at him. He then said to the passenger, “If I have a knife, I would slit your throat,” the complaint states.

The passenger told flight attendants, who noticed Anderson reach into his bag several times with something cupped in his hand. The flight crew then called Salt Lake police.

Anderson denied having a weapon or making threats. But during a consensual search of his bag, police found a Gerber folding knife with a 3 ½-inch blade. Police handcuffed Anderson and took him to the airport police station.

At the station, the complaint says, Anderson made numerous profane threats to police and FBI agents including, “Your days are not long,” “It’s a shotgun in the chest,” “I’ll pull your eyeballs out,” and “It will give me a lot of pleasure to see you again, but you won’t see me, bucko.”

According the complaint, Anderson smelled slightly of alcohol, but did not appear to be drunk. Anderson faces charges of dangerous weapon on an aircraft and retaliation against a federal law enforcement officer by threat of murder.