The tyranny of the local majority – Blue Super Cells

There is a mandate, but its not Obama’s – its our House of Representatives’ mandate!

To many people across the country, some questions rose to the top after the election. What the heck just happened? Is this a second term mandate?

The Democrats tell us that America voted for their policies, giving them a mandate, and now the Republicans are wavering as the ‘cliff’ approaches. Obama keeps sticking to his ‘revenue’ increase scheme, otherwise known as taxing the rich for their fair share but did they really achieve a mandate? Did America really vote to increase their taxes or does it just appear they did? In truth, it’s all an illusion. Why, well let’s examine what took place that fateful day. Your future depends on understanding the answer, so does your bank account.

After losing the election, Romney mentioned why he thought he lost, and many of his supporters have come up with a series of excuses, accusations, and now there is a lot of hand wringing, but its all focused on the wrong aspects. The media actually has left-leaning talking heads as well as Republicans themselves telling us how the Republicans need to change their message. They say it was the Hispanic vote, or the ‘war on women’, or some other demographic unit. But really, when you boil it down, these methods of deciphering what happened miss the point all together.

What really happened was the Left recognized the populace for whom it is, where it is, what it is, and exploited these data in a manner that our forefathers tried to stop on the macro-scale long ago. The original design called for stopping the tyranny of the majority – we just witnessed it on the more micro scale. You may ask, since Obama won by a small margin in the popular vote but he did have a wide margin in the Electoral College, so was there a tyranny of the majority? A closer look does show this indeed happened, especially at the local level in the urban centers. They knew how to win, not through message or record, but more importantly, by artifice. (I am not going to touch the fraud rail.)

The Electoral College, a bad thing when Al Gore won the popular vote but lost the Presidency in 2000, something that was roundly loathed by many when losing, but you do not hear that today from the left. Obama won 332 to 206, a mandate? Sounds like a mandate, but that is an illusion. In the same election we also voted for Governors, Representatives, Senators and myriad local and state offices. The key to understanding why that was an illusion, and why the man who won the race has no mandate is that this nation does not have a national election, rather, it has 50 state elections and one in the District of Columbia and our territories. Obama did win, but what does it really mean?

The theory when America was much less populated was that the heavy urban areas, where life is led one way, would overwhelm those who live another way by the tyranny of the majority. If we had a national election, New York City, Los Angeles, Houston, and Chicago would be the only battlegrounds, and urban people would always get their way. Fortunately, “we the people” have representatives. The Electoral College prevents tyranny on the macro, but tyranny does happen on the state level. Effectively, one urban community can command an entire state, and that is exactly what happened. To argue that it was a demographic issue is largely true – the urban demographic.

Obama won in 26 states and DC while Romney won 24. Our system worked, and the candidate who won more states won the race handily, yes? Well not necessarily. If not for a few key locations, the opposite would have occurred. These few locales became “blue super cells” and they were in key battleground states, and they ended up controlling the outcome for that entire state. Ohio is perhaps the greatest example. In one county, one locale, in Cleveland, in Cuyahoga Countyand its surround. This is an area comprised of many local precincts, where the difference was so great between the two that it overcame the difference of the combined total of the 87 other counties in Ohio. That is tyranny of the majority writ micro. 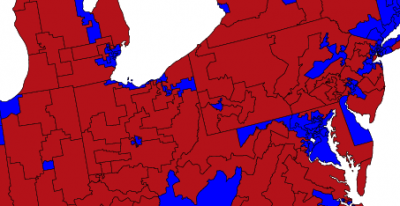 If we look at it from a different perspective, what the forefathers tried to prevent was the very tool the Democrats used, and employed what Tip O’Neill so eloquently said: “All politics are local!” The left identified several super cells, applied over four years of building those areas into a machine they knew would tilt those states in their favor, and it worked. When over 50 precincts or zones as they are called in Philadelphia vote 100% for one candidate solely, the plan worked to perfection – Obama won Pennsylvania more easily than expected in the later days of the campaign.

When we look at the famous red/blue maps by the state, we get one picture. When we look at the county vote we get another, but perhaps most important was how the map of the district seats for the House of Representatives looks. The story of American elections lies in her House Districts, not her counties or states. The blue islands show us where these blue super cells were and the district map shows why there was a tyranny of the majority. The power of the people is in her House, not the White House, yet the media and the parties all talk about demographics as if we have a single national election, as if the nation spoke as one.

Each House District is comprised roughly of the same amount of people with a few exceptions in sparsely populated states, so the way America thinks is actually more apparent when we look at the House of Representatives. Some will say that the Senate make-up is just as meaningful, if not more important, but that defies our foundations. Here is why. 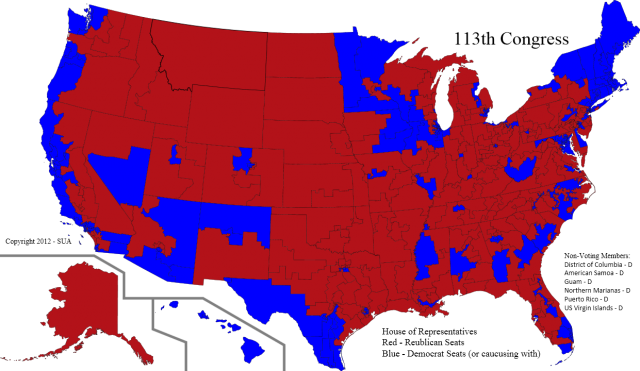 If the nation was showing a mandate, it wasn’t in the race for the Presidency; it was in the race for House seats and Governor-ships. At the district level, the tyranny of the majority is seriously reduced as a weapon. Look at Ohio, or Florida, or Colorado, or even Pennsylvania on the map above. In these states, the people voted overwhelmingly for Republicans for the House, yet each went to Obama for the White House. The battleground states are largely red, not by geographic representation, but by equal representation at the District level. The left knew this going in, so they loaded up in the blue super cells to offset the preponderance of districts going Republican.

The left’s “get out the vote” and registration drive efforts, along with the massive ground game already in place for four years, buoyed by almost a billion dollars in those ultra-blue super cells was the trick. This was where the right lost badly. Why, because they did not recognize the importance of the ground game and they completely gave up in the inner cities; there were no “red super cells”. When you have slivers of land so densely populated, it’s easy to get the voter turnout chugging. It’s all very local, so organizers can load buses and cars easily, quickly repeating the process and attain the record turnout where they know they have the vote. This overwhelmed efforts elsewhere, especially in more spread out districts. But again, its all about the House Districts really when it comes to message and mandate.

On a state wide basis, this formula works, but it does not work for gaining seats in the house – only the message works for that. If it was the President’s message that won the day, the House would look quite different in the 113th Congress. For President and Senator, it’s a statewide race; races that can be swayed by blue super cells. One or two urban locales can move an entire state – quite the reason the founders feared the tyranny of pure democracy, one that undermines the representative republic we are supposed to be. They meant well, but it seems this was not anticipated fully.

So in a sense, if we need to fix our Electoral College system we may be better served by counting how state districts voted, and award that elector to vote for the state as does Nebraska and Maine – the “congressional district method“. The two votes each has by virtue of its senate seats would go to who carried the entire state. But we simply cannot allow just one densely packed area where group think rules the day to continue to control the outcome. Our states are assigned electors by the number of districts and Senators, yet the states popular vote rules the Electors, a recipe for tyranny of the majority writ micro.

Florida is a great example of this as well. The people have repeatedly voted for Republicans for state offices; voted to fill 17 out of 27 Representative seats with Republicans yet have a Senator from each party and Obama won. For federal office, the Democrat machine grinds away in Miami, Orlando, and the gold coast, and arguably stole one seat in St. Lucie County. In Ohio, the people voted for a Republican Governor previously, and filled 12 of the 16 seats in House districts with Republicans, yet they have a Senator from each party. In Pennsylvania the people have a Republican Governor and 13 of 18 House seats are held by Republicans, and again, a Senator from each party. Obama won each of these battleground states in a somewhat comfortable way as a result, but these states are largely red, very red.

The message then for the Republicans is this, re-educate yourselves, do not change your principles, stick to your guns, and make sure the tyranny of the masses at the micro level does not ruin our country again. The Obama mandate does not exist – you, our Representatives have the mandate – defend those you represent, conserve our representative republic. Become more conservative, not less. Moderation is for those without core principles and the left has you believing them. Do not cave in and let them take us all over the cliff!