I was in Australia earlier this month and there, as elsewhere on my recent travels, the consensus among the politicians I met (at least in private) was that Washington lacked the will for meaningful course correction, and that, therefore, the trick was to ensure that, when the behemoth goes over the cliff, you’re not dragged down with it. It is faintly surreal to be sitting in paneled offices lined by formal portraits listening to eminent persons who assume the collapse of the dominant global power is a fait accompli. “I don’t feel America is quite a First World country anymore,” a robustly pro-American Aussie told me, with a sigh of regret. 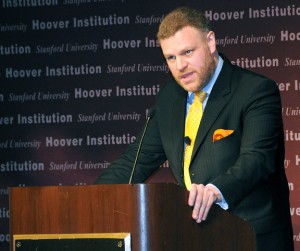 Well, what does some rinky-dink ’roo-infested didgeridoo mill on the other side of the planet know about anything? Fair enough. But Australia was the only major Western nation not to go into recession after 2008. And in the last decade the U.S. dollar has fallen by half against the Oz buck: That’s to say, in 2002, one greenback bought you a buck-ninety Down Under; now it buys you 95 cents. More of that a bit later.

I have now returned from Oz to the Emerald City, where everything is built with borrowed green. President Obama has run up more debt in three years than President Bush did in eight, and he plans to run up more still — from ten trillion in 2008 to fifteen and a half trillion now to 20 trillion and beyond. Onward and upward! The president doesn’t see this as a problem, nor do his party, and nor do at least fortysomething percent of the American people. The Democrats’ plan is to have no plan, and their budget is not to budget at all. “We don’t need to bring a budget,” said Harry Reid. Why tie yourself down? “We’re not coming before you to say we have a definitive solution,” the treasury secretary told House Budget Committee chairman Paul Ryan. “What we do know is we don’t like yours.”

Nor do some of Ryan’s fellow conservatives. Texas congressman Louie Gohmert, for whom I have a high regard, was among those representatives who appeared at the Heritage Foundation to express misgivings regarding the Ryan plan’s timidity. They’re not wrong on that: The alleged terrorizer of widows and orphans does not propose to balance the budget of the government of the United States until the year 2040. That would be 27 years after Congressman Ryan’s current term of office expires. Who knows what could throw a wrench in those numbers? Suppose Beijing decides to seize Taiwan. The U.S. is obligated to defend it militarily. But U.S. taxpayers would be funding both sides of the war — the home team, via the Pentagon budget, and the Chinese military, through the interest payments on the debt. (We’ll be bankrolling the entire People’s Liberation Army by some point this decade.) A Beijing–Taipei conflict would be, in budget terms, a U.S. civil war relocated to the Straits of Taiwan. Which is why plans for mid-century are of limited value. When the most notorious extreme callous budget-slasher of the age cannot foresee the government living within its means within the next three decades, you begin to appreciate why foreign observers doubt whether there’ll be a 2040, not for anything recognizable as “the United States.”

Yet it’s widely agreed that Ryan’s plan is about as far as you can push it while retaining minimal political viability. A second-term Obama would roar full throttle to the cliff edge, while a President Romney would be unlikely to do much more than ease off to third gear. At this point, it’s traditional for pundits to warn that if we don’t change course we’re going to wind up like Greece. Presumably they mean that, right now, our national debt, which crossed the Rubicon of 100 percent of GDP just before Christmas, is not as bad as that of Athens, although it’s worse than Britain, Canada, Australia, Sweden, Denmark, and every other European nation except Portugal, Ireland, and Italy. Or perhaps they mean that America’s current deficit-to-GDP ratio is not quite as bad as Greece’s, although it’s worse than that of Britain, Canada, France, Germany, Italy, Spain, Belgium, and every other European nation except Ireland.

But these comparisons tend to understate the insolvency of America, failing as they do to take into account state and municipal debts and public pension liabilities. When Morgan Stanley ran those numbers in 2009, the debt-to-revenue ratio in Greece was 312 percent; in the United States it was 358 percent. If Greece has been knocking back the ouzo, we’re face down in the vat. Michael Tanner of the Cato Institute calculates that, if you take into account unfunded liabilities of Social Security and Medicare versus their European equivalents, Greece owes 875 percent of GDP; the United States owes 911 percent — or getting on for twice as much as the second-most-insolvent Continental: France at 549 percent.

And if you’re thinking, Wow, all these percentages are making my head hurt, forget ’em: When you’re spending on the scale Washington does, what matters is the hard dollar numbers. Greece’s total debt is a few rinky-dink billions, a rounding error in the average Obama budget. Only America is spending trillions. The 2011 budget deficit, for example, is about the size of the entire Russian economy. By 2010, the Obama administration was issuing about a hundred billion dollars of treasury bonds every month — or, to put it another way, Washington is dependent on the bond markets being willing to absorb an increase of U.S. debt equivalent to the GDP of Canada or India — every year. And those numbers don’t take into account the huge levels of personal debt run up by Americans. College-debt alone is over a trillion dollars, or the equivalent of the entire South Korean economy — tied up just in one small boutique niche market of debt which barely exists in most other developed nations.

“We are headed for the most predictable economic crisis in history,” says Paul Ryan. And he’s right. But precisely because it’s so predictable the political class has already discounted it. Which is why a plan for pie now and spinach later, maybe even two decades later, is the only real menu on the table. There’s a famous exchange in Hemingway’s The Sun Also Rises. Someone asks Mike Campbell, “How did you go bankrupt?” “Two ways,” he replies. “Gradually, then suddenly.” We’ve been going through the gradual phase so long, we’re kinda used to it. But it’s coming to an end, and what happens next will be the second way: sudden, and very bad.

By the way, that decline in the U.S./Australian exchange isn’t the only one. Ten years ago the U.S. dollar was worth 1.6 Canadian; now it’s at par. A decade ago, the dollar was worth over ten Swedish Kroner, now 6.7; 1.8 Singapore dollars, now 1.2. I get asked with distressing frequency by Americans where I would recommend fleeing to. The reality is, given the dollar’s decline over the last decade, that most Americans can no longer afford to flee to any place worth fleeing to. What’s left is the non-flee option: taking a stand here, stopping the spendaholism, closing federal agencies, privatizing departments, block-granting to the states — not in 2040, but now. “Suddenly” is about to show up.

— Mark Steyn, a National Review columnist, is the author of After America: Get Ready for Armageddon. © 2012 Mark Steyn