The 'Cover-Up', how high does it really go on Fast and Furious?

By Scott W. Winchell, Editor – Just when we thought the Fast and Furious debacle was so reprehensible that numerous Congressmen, from both parties, joined a growing cacophony of calls from the blogo-sphere and media pundits for the resignation of US Attorney General Eric Holder it takes an even bigger twist.

SUA and many others have pointed out that the political ideology of current administration officials set the stage for such a debacle but its not just about Holder’s lies anymore, it goes further, into a blatant cover-up that may reach all the way up to the White House.

It now appears that the death of Border Patrol Officer Brian Terry was clearly avoidable, if only the FBI and DEA had practiced proper ‘deconfliction’, or more precisely, talked to each other, local authorities, and Border Patrol to avoid conflicts between cases, especially involving informants. Not informing Border Patrol of ongoing, extremely dangerous operations in an infamous area called “Smuggler’s Paradise” in Pima County Arizona’s Peck Canyon was unconscionable.

One must also wonder if Pima County Sheriff Clarence Dupnik now famous for his outspokenness after the Gabby Giffords incident, knew anything was happening either. After all, it was happening in his jurisdiction and it was in an area Border Patrol frequently performed patrols as part of its duties. 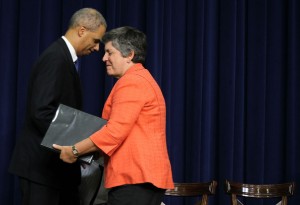 The timing is also very curious here because Giffords and 19 others were shot on January 8, 2011, just a few weeks after Brian Terry was killed on December 14, 2010 and President Obama immediately sent FBI Director Mueller to the area to personally handle the situation. Why? The unprecedented move was curious at the time, but since a Congresswoman was a victim, it seemed to be a deft move, if not a political move, or was it?

Questions now arise that since both incidents happened within Pima County, within mere weeks of each other, the White House may have been worried the two may be related. Or possibly that with all that new publicity, the DoJ and the White House did not want prying eyes seeing anything related to the Terry death.

Additionally, questions rise that DoJ operations intentionally withheld information from DHS to cover for their own ineptitude prior to the incident where Terry was killed. Not informing Border Patrol of a building incident directly caused Brian Terry and his team to walk into a heavily armed ‘rip crew’ operation.

Terry had no way to defend himself facing much heavier ordnance, assault rifles that came from Fast and Furious operatives. In fact, one weapon is now missing, and the case has been sealed.

Janet Napolitano told Congress she never talked to DoJ about the killing of Brian Terry, but we now know that a debacle like this had to filter up to the top, especially since it happened so close to the Giffords incident. Her staff had to know what took place between agencies and with all the new publicity, it must have been discussed by everyone in DHS. It is simply unbelievable that she would not have confronted DoJ about such insanity unless she was directed to keep silent by the White House.

If Holder does resign, along with others, are they going to be liable for abetting a crime after the fact? What if Issa and others prove culpability and confront Holder when he testifies again on December 7th and demand his resignation right there in the hearing room? We can only hope.

From multiple sources come shocking charges of deadly ineptitude and an FBI coverup in Fast and Furious.

In the growing Fast and Furious scandal, Border Patrol Agent Brian Terry’s death in Peck Canyon, Arizona was previously described as a chance meeting that led to a firefight: an illegal alien “rip crew” working for the Sinaloa cartel was hoping to find other illegal aliens and to rob them at gunpoint. Instead, they stumbled across a Border Patrol unit and murdered Agent Terry.

Last week, the Washington Times offered a new version of the encounter: they reported that the rip crew was not hunting illegals, but Border Patrol teams — with the intention of engaging them in combat.

Sources now tell PJ Media that neither version of events is accurate: the rip crew was not waiting for a chance encounter with other illegals, nor did the members intend to engage American law enforcement agents.

The rip crew was in Peck Canyon that evening with the intention of stealing money and drugs from a specific shipment of which they had prior knowledge.

Sources claim the Department of Justice has been trying for almost a year to hide the key information — how the rip crew knew the shipment was coming through that night.

Criminal informants (CIs) are a common tool of law enforcement agencies. When agencies apprehend criminals, agencies often reduce or drop charges in exchange for information leading to the arrests of higher-ranking criminals. Earlier this year, reports claimed that Operation Fast and Furious weapons smuggled over the border were actually chosen by an FBI informant, and paid for with money provided by the federal government.

The rip crew knew to be in Peck Canyon that December evening because a CI working for the FBI found out about a smuggling run — from the FBI.

It is not clear if the information was provided intentionally, but a possible motivation for the FBI to provide the information is known to exist: the CI had previously lost a shipment of drugs, and wanted to regain the trust of the cartel with an offering of drugs or money. The other possibility is that the FBI mistakenly allowed the CI to discover the information.

The Drug Enforcement Administration (DEA) — through its own CIs and communications intercepts — was also aware of the planned assault.

Neither the DEA nor FBI warned Border Patrol about the expected criminal activity.

The federal government will still not reveal if one of the two WASR-10 AK-pattern semi-automatic rifles located near the scene — provided to the Sinaloa cartel via Operation Fast and Furious — was the weapon that put a bullet through Brian Terry’s heart. The existence of a third recovered gun, an SKS carbine, has been disputed by the FBI despite the fact it had been talked about openly in the beginning of the investigation among federal agents.

Multiple sources tell PJM that this third weapon “disappeared” because it was the weapon carried by the FBI CI who ran the rip crew. When it was recovered near the scene of the murder and subsequently traced by the ATF, it traced back to the FBI CI via the gun shop in Texas where it was purchased.

Deconfliction is a major element of high-risk undercover law enforcement work. Undercover agents and informants often cross jurisdictional paths, and deconfliction is the process whereby agencies warn off other agencies so that their assets don’t end up in conflict, putting investigations and lives at risk.

In this case, the FBI and DEA failed to deconflict. Neither agency bothered to warn Border Patrol to keep their BORTAC teams out of Peck Canyon that evening. As a direct result of this FBI and DEA failure — combined with Homeland Security forcing BORTAC units to carry less-lethal beanbag rounds in some of their primary weapons — Brian Terry’s under-armed four-man unit walked into an ambush against a heavily armed rip crew, at least five of whom were carrying rifles.

Brian Terry’s murder was entirely preventable. The incompetence of the DEA and FBI let his Border Patrol unit walk into an ambush. After the ambush, it appears the FBI tampered with evidence to cover up that one of their informants was involved with the murder of a federal agent.

The government has recently sealed the case against the only suspect the FBI chose to keep behind bars.