Sinaloa leader’s son in jail in Chicago after seeking weapons

Editor’s Note – Chock one up for the good guys. Vicente Zambada, son of one of the reputed Sinaloa Cartel’s leaders, Ismael Zambada is in jail in Chicago awaiting trial. Why were they here? They were seeking weapons to attack our forces and the Mexican authorities in Mexico City itself “to teach the Gringo’s a lesson…” The war appears to be more military than ever, and its just going to get worse. When there is so much money involved, and it is bloodier than ever, expect the fallout to be far worse along the border as rivals try to implicate each other, and to do so with US weapons.

CHICAGO — The leaders of a powerful Mexican cartel, frustrated that U.S. law enforcement was interfering with their lucrative drug business, plotted a military-style attack on a U.S. or Mexican government building to “send the gringos a message,” federal prosecutors allege in documents filed this week. 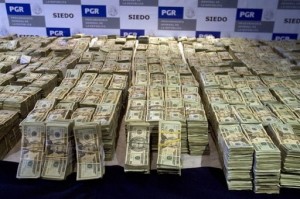 Just a portions of cash seized from the Sinaloa Cartel.

Leaders of the Sinaloa cartel sought dozens of American-made weapons for an attack in Mexico City on possible targets that included government buildings, an embassy or consulate or media outlet, according to documents in the case against Vicente Zambada, an alleged top lieutenant in the cartel.

Zambada is in jail in Chicago awaiting trial, one of dozens of defendants charged in the city as part of a sweeping international investigation. He has pleaded not guilty to charges that he conspired to import and sell large amounts of cocaine and heroin in the United States, including Chicago.

Authorities say his father, Ismael Zambada, runs the cartel along with Mexico’s most wanted man, Joaquin “El Chapo” Guzman. There’s nothing in the documents to indicate the plot was carried out.

Vicente Zambada’s lawyers claim he and other cartel leaders were granted immunity by U.S. agents – and carte blanche to smuggle cocaine over the border – in exchange for intelligence about rival cartels engaged in bloody turf wars in Mexico. Prosecutors have denied that such an agreement exists.

But deals with key players in the cartel have allowed prosecutors to chip away at its operations. Pedro and Margarito Flores, twin brothers who bought and distributed drugs from the cartel in Chicago, are among those cooperating with the government.

Margarito Flores has alleged that the plot to attack a government or media building was hatched during a 2008 meeting at a mountaintop compound in Mexico. Cartel leaders, upset about the recent arrest of Ismael Zambada’s brother, griped that the Mexican government was allowing American law enforcement to “do whatever they want,” Flores has told prosecutors.

When Guzman asked what leaders were going to do about the problem, Ismael Zambada allegedly responded, “It will be good to send the gringos a message. Whatever we do, we have to do it in someone else’s territory,” according to a 63-page proffer filed Thursday in which prosecutors summarize their evidence against Vicente Zambada and the cartel.

During the conversation, the documents say, Guzman suggests they target a Mexican or American government building in Mexico City. Vicente Zambada then turns to Margarito Flores and tells him to find a U.S. soldier returning from overseas to give him 20-30 “big powerful weapons,” specifying that they be American-made. During a later recorded phone conversation, prosecutors say, Vicente Zambada reiterates with Flores that the cartel will buy the weapons.

Prosecutors also laid out in the proffer how the cartel has smuggled tons of cocaine and kilograms of heroin into the United States over land, sea and air over the years.

Members of the cartel have allegedly evaded arrest by means including the bribing of public officials and law enforcement and carrying out brazen acts of violence – including killing officers who wouldn’t accept bribes. The elusive billionaire Guzman escaped from a Mexican prison in a laundry truck in 2001.