Senate goes on vacation as House passes a Border Bill

Editor’s Note – Border crisis – security or humanitarian issue? The answer depends on your political goals and/or ideology, but one thing is clear, our national security needs at the border have never been fully met, and the humanitarian crisis is a creation of the President. He has created a play on emotions for nefarious ends. 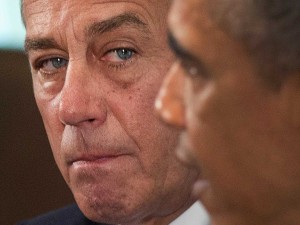 The pundits and talking heads will argue forever, but what really is taking place is one group jockeying for political position versus those who wish to actually affect change and solve current issues before they get out of hand.

Obama purports it to be the right fighting the right and a do nothing Congress, but if one pays close attention, it is all about the vote for the left.

The problem is Mr. President, though so many in this country cannot even describe our form of government or its branches correctly, you sir are manipulating the ill-informed and playing to your base at the expense of our national security.

Divide and conquer. But it was your Senate that went on vacation sir. Mr. Brinkmanship strikes again.

Compromise to Obama is “do it my way or the highway!” But we want to know why Harry Reid never allows a vote on anything from the House, even when the constitution mandates that all spending bills must begin in the house.

You can get the Senate to do anything you want to fool the people. The manipulation is so obvious – to all but the ill-informed.

It is so obvious that it is a political ploy because we already had successful operations in conjunction with Central American countries like:

It is obvious, Obama does not want to solve the problem, and he and Kerry are not doing their job with Mexico or the other nations to our south.

WASHINGTON (AP) — House Republicans passed legislation late Friday to address the crisis on the U.S.-Mexico border by sending migrant youths back home without hearings, winning over conservatives with a companion bill that could lead to deporting more than half a million immigrants whom the Obama administration granted temporary work permits.

President Barack Obama condemned the Republican action and said he’d act unilaterally, as best he could.

A day after GOP leaders pulled the border bill from the floor in a chaotic retreat, tea party lawmakers were enthusiastically on board with the new $694 million version and a companion measure that would shut off a program created by Obama granting work permits to immigrants brought here illegally as kids.

The second bill also seemed designed to prevent the more than 700,000 people who’ve already gotten work permits under the program from renewing them, ultimately making them subject to deportation.

The spending bill passed 223-189 late Friday, with only four Republicans voting “no” and one Democrat voting “yes.” The measure ending Obama’s deportation relief program passed 216-192, with 11 Republican “no” votes and four Democrats crossing party lines to vote in favor.

“It’s dealing with the issue that the American people care about more than any other, and that is stopping the invasion of illegal foreign nationals into our country,” said Rep. Michele Bachmann, R-Minn. “And we got to yes.”

But Obama said no. “They’re not even trying to solve the problem,” the president said. “I’m going to have to act alone, because we do not have enough resources.”

Obama said he would reallocate resources where he could, while making clear his options were limited without congressional action. The administration already has taken steps including re-ordering immigration court dockets and boosting enforcement measures.

The moves in the House came on what was to have been the first day of lawmakers’ five-week summer recess, delayed by GOP leaders after their vote plans unexpectedly collapsed on Thursday. Senators had already left Washington after killing their own legislation on the border crisis, so there was no prospect of reaching a final deal. But three months before midterm elections,

House Republicans were determined to show that they, at least, could take action to address the crisis involving tens of thousands of unaccompanied minors fleeing violence and poverty in Central America to cross illegally into South Texas.

“It would be irresponsible and unstatesmanlike to head home for the month without passing a bill to address this serious, present crisis on the border,” said Rep. Hal Rogers, R-Ky., chairman of the Appropriations Committee.

To reach a deal, GOP leaders had to satisfy the demands of a group of a dozen or more conservative lawmakers who were meeting behind the scenes with Sens. Ted Cruz, R-Texas, and Jeff Sessions, R-Ala., and taking their cues from outside groups such as the Heritage Foundation that opposed earlier versions of the legislation.

These lawmakers objected to sending any more money to Obama without a strong stance against his two-year-old deportation relief program, which Republicans blame for causing the current border crisis by creating the perception that once here, young migrants would be allowed to stay — a point the administration disputes.

House GOP leaders agreed earlier in the week to hold a separate vote to prevent Obama from expanding the deportation relief program, as he’s signaled he plans to do, but that didn’t satisfy conservatives who held out for stronger steps.

Thursday night, those lawmakers huddled in the basement of the Capitol with new House Majority Whip Steve Scalise, R-La., until coming up with a deal ending funding for the deportation relief program as well as making changes to the border bill aimed at ensuring the faster removal of the Central American migrant youths.

Friday morning, as the full Republican caucus met in the Capitol, conservative lawmakers were declaring victory.

With the vote to end the deportation deferral program, “We will put a handcuff on one of the president’s hands,” said Bachmann.

The GOP plans met with howls of protest from immigration advocates and Democrats, who warned Republicans that they’d be alienating Latino voters for years to come.

“This, in all honesty and candor, is one of the most mean-spirited and anti-immigrant pieces of legislation I’ve seen in all my years in the Congress,” said longtime Rep. John Conyers, D-Mich.

Democrats also accused Republicans of handing control of their policies to the most conservative lawmakers in the House, within months of abandoning pledges to act on broad-based legislation to overhaul U.S. immigration policy and bring millions of immigrants here illegally out of the shadows.

The new GOP border bill adds $35 million more for the National Guard, which would go to reimburse states for guard deployments. Like earlier versions, it would increase spending for overwhelmed border agencies, add more immigration judges and detention spaces, and alter a 2008 anti-trafficking law to permit Central American kids to be sent back home without deportation hearings.

That process is currently permitted only for unaccompanied minors arriving from Mexico and Canada.

The bill would pay for strapped border agencies only for the final two months of this budget year, falling far short of the $3.7 billion Obama initially requested to deal with the crisis into next year. More than 57,000 unaccompanied youths have arrived since October, mostly from El Salvador, Honduras, and Guatemala, plus tens of thousands more migrants traveling as families.