Editor’s Note – Once again, Andy McCarthy hits the nail on the head. The Clinton Foundation IS best defined as a RICO operation from all we are now learning. Maybe they can “justify” their actions individually, but when you collect all the parts, it is a racket.

The trouble is, would the Department of Justice consider it RICO? Would Loretta Lynch launch an investigation?

She is about to be voted upon for Attorney General finally and may win approval in the Senate, but would she act just like her predecessor, Eric Holder and avoid yet another investigation of a ‘friend of the family’ unlike Senator Menendez?

Is this the beginning … of RICO?

Okay, so that’s not quite as catchy as Edward G. Robinson’s immortal line. But it is what a good prosecutor would be asking while pondering the growing cloud around Clinton Foundation.

Among Little Ceasar’s imprints on popular culture is that Robinson’s mobster character, Cesare Enrico Bandello, inspired Congress to name its seminal anti-organized crime legislation “RICO” – the Racketeer Influenced and Corrupt Organizations Act of 1971. The mafia was its most infamous target, but far from its only target.

RICO makes it a crime to run an organization through what’s called a “pattern of racketeering activity.” The term racketeering is extensively defined in the statute. It includes acts involving bribery, fraud, and obstruction of justice, to name just a few.

Prosecutors are fond of RICO because it enables them to unite disparate illicit or corrupt transactions into one framework, the enterprise. It need not be a mafia family or traditional criminal organization; it can be an ostensibly legitimate organization – e.g., a foundation, a labor union, a corporation, a guild – that, contrary to the image it projects publicly, commits sundry legal offenses in conducting its affairs.

As a matter of fact, if the pattern of offenses includes fraud and influence peddling, then the enterprise’s portrayal of itself as a caring, altruistic charitable foundation can be very helpful to the case. Juries do not like hypocrisy and shady dealing. 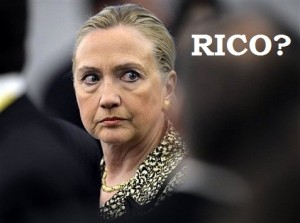 They get turned off by “charitable organizations” that turn out, in the main, to be vehicles for their principals to live lavishly, or covers for selling political influence. And juries know charitable organizations tend not to wipe their servers clean even after congressional investigators have instructed them to preserve evidence.

You see the Hillary! 2016 campaign launch, you consider what we’re learning about the Clinton Foundation, and you naturally ask yourself: Do we really want to go through this again?

You consider the Clinton Foundation, you think about the State Department – Benghazi, the courting of the Muslim Brotherhood, the secret, unlawful email system, the foreign money pouring into Clinton coffers while Mrs. Clinton was making key decisions about American foreign policy – and you naturally ask yourself: What has Hillary Clinton ever run that did not turn into a debacle?

Finally, we should also consider the Obama administration’s legal standards. As I’ve recently discussed here at Ordered Liberty, the Justice Department has just filed its indictment of Senator Robert Menendez (D., N.J.) on various corruption charges. The prosecution’s theory is that Menendez accepted “things of value” in exchange for using his political influence to benefit a big time donor.

Sen. Menendez counters that he did nothing wrong – i.e., that there is no nexus between, on the one hand, the hefty contributions, private jet rides to ritzy resorts, and other posh gifts he received, and, on the other hand, the use of his office in ways that just happened to favor the donor.

We are still at a very early stage of scrutinizing the Clinton Foundation, but we can already say two things with confidence: