Progressive – the re-branding of Communism/Scocialism

Editor’s Note – Progressives – the re-branding of Communists. Plain and simple, and we all know it. Changing names is the tactic of those who wish to hide something. They want to hide it because it is that nefarious and they know it. At SUA, we like to remind people that when Lemmings jump off the cliff, they are progressing from one place to another – where are we progressing?

The “Progressive” brand — for what does it stand? 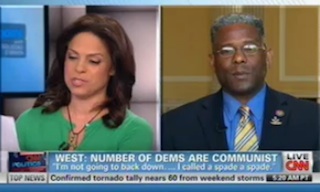 Yesterday we learned that Representative Allen West (R-FL) was disinvited from an NAACP fundraiser in his home state of Florida. Last week, West had commented that “I believe there’s about 78 to 81 members of the Democratic Party that are members of the Communist Party.”

West, who came under fire for his controversial comments, responded by penning a piece inThe Hill:

My colleagues in the Congressional Progressive Caucus have taken umbrage with my equation of their ideals with those of communists. Why? Why shouldn’t we have this discussion? What part of their agenda are they trying to hide?

We must be able to openly discuss how our fundamental freedoms are being slowly chipped away by an over-reaching nanny state that has bit by bit slipped its tentacles into every aspect of our lives, from the types of light bulbs we can use to the size of our toilet tanks.

In a follow-up interview with TheStreetTV, West commented that “…when you look at the history of the Communist Party, when it came to the United States of America, back at the turn of the century, they rebranded themselves and called themselves ‘Progressives’”:

In response, elements of the Left from Rep. Barney Frank to Rolling Stone Magazine and the Progressive Caucus wrote off his comments as “McCarthyite” and worse than McCarthy.Soledad O’Brien–the CNN host who notably fumbled over the definition of Critical Race Theory–applied her now-signature sarcastic style to her coverage.

Does West’s assertion that today’s Progressive brand is simply an evolution of yesterday’s Communist label hold up? It helps to take a look at the Congressional Progressive Caucus.

Progressive Caucus member Schakowsky, profiled in 2011 on Progressive.org, has repeatedly come under fire from her Jewish constituents for her connection with the Progressive Caucus and the Progressive Democrats of America, which supported the Hamas-led flotilla into Gaza. The Progressive brand supports this action against Israel, and for a member of the Caucus it is difficult to walk the line between defending Israel and being affiliated with Hamas’s flotilla.

Danny Davis, who sits on the House Homeland Security Committee, was recently exposed receiving a lifetime achievement award from the Communist Party USA headquarters in Chicago. This is the same congressman whom President Barack Obama had introduced by saying “he shares our values.”

While Allen West’s assertion may have been met with derision and some uneasiness on both the Left and the Right, his questions as to the origins of the Progressive brand and whether members of the Progressive Caucus share values with communism is worth exploring.

When I was studying for my two master’s degrees in political science at Kansas State University and at the U.S. Army Command and General Staff Officer College, the very best professors were those who would begin each lecture with a challenging assertion. It engaged discussion and analysis, and was the best way to uncover the essence of the particular subject of the day.

Time for some due diligence.