Editor’s Note – Now that Netanyahu has stunned both his country’s leftist media and ours, and set Obama into a tirade, Obama is threatening Netanyahu before he even calls to congratulate him on his stunning victory.

We and many others have chronicled Obama’s loathe for Netanyahu for years, but now, it is not even arguable anymore – and Obama is about to throw our greatest Middle East ally under the bus in favor of the Arabs, or as the left likes to call them, the Palestinians.

Now Obama is going to cut him off at the knees by going around him to the U.N. – removing a long history of defending Israel in that farce of a world peace organization:

From Tel Aviv to Turtle Bay – The White House hoped a new Israeli prime minister would resume peace talks with the Palestinians. With Netanyahu holding on, the administration is weighing a turn to the U.N. to help force a deal.

After years of blocking U.N. efforts to pressure Israelis and Palestinians into accepting a lasting two-state solution, the United States is edging closer toward supporting a U.N. Security Council resolution that would call for the resumption of political talks to conclude a final peace settlement, according to Western diplomats. (Read more at Foreign Policy.)

The petulant Obama must get his way; by hook or crook, and he harbors grudges like no other President. Dick Cheney is correct, Obama is the worst President, eclipsing Jimmy Carter easily – or is it badly?

Will Obama no longer have Israel’s back? The icy relationship between Obama and Netanyahu is about to get far colder!

Once again, Obama’s view of the world, and that of John Kerry is proving to be a continuing failure for the best interests of freedom loving people in favor of Palestine and our enemies. Look for him to coddle Hezbollah now as well!

By Robert Tait, Jerusalem and David Blair in Tel Aviv of the UK Telegraph

A triumphant Benjamin Netanyahu appeared to be on a new collision course with Barack Obama on Wednesday night after the US president bluntly restated his belief in a Palestinian state and criticised the Israeli leader’s re-election campaign tactics.

In a pointed intervention, Mr Obama was said to be “deeply concerned” about comments made about Israel’s Arab population, a spokesman said, calling it “divisive”.

“The Obama administration is deeply concerned by the use of divisive rhetoric in Israel that sought to marginalise Arab Israeli citizens,” Josh Earnest, a White House spokesman told reporters. “This rhetoric undermines the values and Democratic ideals that have been important to our democracy and an important part of what binds the United States and Israel together. These are views the administration intends to communicate directly to the Israelis.”

The criticism appeared to refer to comments Mr Netanyahu made in a video posted on Facebook on election day on Tuesday when he attempted to mobilise supporters by warning that Arabs were “voting in droves” and being bussed to polling stations by Left-wing groups.

The White House intervention rudely interrupted the Israeli prime minister’s celebrations of an unexpected landslide re-election win and followed Mr Netanyahu’s eve-of-poll abandonment of a commitment to recognise Palestinian statehood as part of a peace agreement. 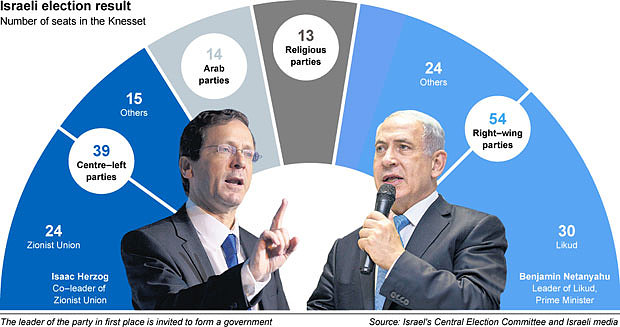 Mr Netanyahu – desperately trying to woo Right-wing voters – created fresh doubts about the future of the Middle East peace process when he said on Monday that a Palestinian state would not be created if he were re-elected.

Mr Netanyahu’s Likud party won a resounding victory against a strongly-tipped centre-Left opposition grouping, the Zionist Union, largely by appealing to supporters of Right-wing parties like the Jewish Home, which opposes a Palestinian state.

The Israeli leader has previously committed himself to accepting a demilitarised Palestinian state as part of a comprehensive peace deal in a 2009 speech at Tel Aviv’s Bar Ilan University. He said that commitment was no longer relevant in a region threatened by Islamist radicals.

But in a thinly-veiled rebuke of Mr Netanyahu’s volte face, Mr Earnest told reporters that Mr Obama still believed that a two-state solution – usually defined as an independent Palestine and Israel living side-by-side – was the best means of bringing stability to the Middle East.

“It has been the policy of the United States for more than 20 years that a two-state solution is the goal of resolving the conflict between the Israelis and Palestinians,” he added. “Based on Prime Minister Netanyahu’s comments, the United States will reevaluate our position and the path forward in this situation.” 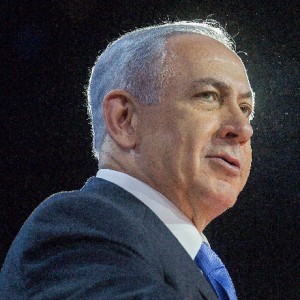 Prime Minister
(2009 – present and 1996 – 1999) Benjamin Netanyahu is Israel’s longest-serving prime minister since David Ben Gurion. He came to power for the first time in 1996 and held the premiership until his crushing defeat in the 1999 election.
He achieved a political comeback in 2009 and has been prime minister ever since.

He said Mr Obama had not yet called Mr Netanyahu to congratulate him but would do so in the coming days.

The two men have had a notoriously frosty relationship – which worsened this month when the Israeli leader accepted an invitation behind Mr Obama’s back to address the US Congress, where he criticised the White House’s efforts to reach a deal with Iran over its nuclear programme.

In further remarks, the spokesman said Mr Obama did not believe Mr Netanyahu’s re-election win would have a serious impact on the Iran negotiations, which have reached a crucial phase.

The Obama administration’s comments followed statements from the European Union, the United Nations and the Palestinians demanding a renewed commitment to the stalled peace process.

Palestinian officials responded to Mr Netanyahu’s re-election by threatening to intensify diplomatic moves aimed at pressuring Israel, including pursuing it for possible war crimes in the International Criminal Court, which the Palestinian Authority is due to join on April 1.

A spokesman for Mahmoud Abbas, the Palestinian Authority leader, said he expected the new Israeli government to “recognise the two-state solution”.

“On this basis, we will continue to cooperate with any Israeli government that is committed to international resolutions,” said the spokesman, Nabil Abu Rudeineh.

The renewed emphasis on peace came after Mr Netanyahu vowed on Wednesday to quickly assemble a new Right-wing government that would safeguard the “welfare and security” of all Israelis.

A day after a surprise landslide victory, the prime minister said he would waste no time by putting together a new coalition “within two to three weeks”.

“Reality will not wait for us,” he said. “The citizens of Israel expect us to quickly put together a leadership that will work for them regarding security, economy and society as we committed to do – and we will do so.”

The pledge came as final results from Tuesday’s poll showed his Likud party winning 30 seats in the 120-member Knesset, Israel’s parliament, decisively outstripping the 24 won by the Zionist Union, which pre-election surveys had suggested could emerge as the biggest party.

It paved the way for Mr Netanyahu to serve a fourth term as Israeli prime minister during which he is likely to become his country’s longest-serving leader, surpassing David Ben-Gurion, Israel’s founding leader.

The result also confounded exit polls that showed the two groupings in a dead heat – an outcome which would have raised the possibility of them joining forces in a national unity government, or grand coalition. 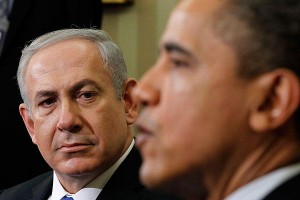 That appeared unlikely on Wednesday as Likud officials predicted a new conservative government formed with smaller Right-wing and religious parties. Isaac Herzog, the Zionist Union leader, ruled out entering a grand coalition by conceding that his future lay in the opposition.

Mr Netanyahu is instead expected to cobble together a coalition with like-minded partners such as the Jewish Home party before reaching out to Moshe Kahlon, a former Likud minister whose new Kulanu party won 10 seats by appealing to Israelis worried about socio-economic issues.

Mr Netanyahu’s victory was achieved through using “cannibalising” tactics that involved eating up support from smaller Right-wing parties by frightening their followers about the prospects of a Left-wing government ready to compromise Israel’s security, campaign insiders said.

As the prime minister’s poll ratings sunk, his chief strategist, Aron Shaviv, decided to make his woes the main theme in the campaign’s final days by constantly reminding voters that the man they know as “Bibi” really might lose.

Making a virtue of Mr Netanyahu’s vulnerability, the tactic targeted voters who had abandoned Likud for various parties positioned even further along the hardline spectrum, notably the Jewish Home, led by Naftali Bennett, which lost five seats in the election.