Editor’s Note – With yet another diminished number of people watching Obama’s 2015 State of the Union Address (SOTU), Obama rambled on for more than an hour and never once mentioned al Qaida. Like his term “violent extremists,” he just cannot say the words “militant Islam” or similar phrases because he sees the world as he wants it to be, not what it is in reality. 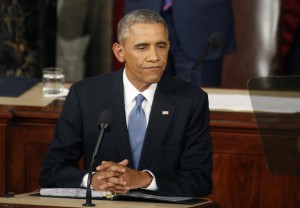 During a pause in his speech, Obama rests after declaring he would veto Republican efforts…

The Wall Street Journal seemed to sum it up well but Newt Gingrich drove the point home in his article at NewsMax.

The “leader of the free world’ exists now only in his mind. Unfortunately, the rest of the world rolls its eyes at his words and we here in America are simply embarrassed once again.

He claims credit where it is not due, ignores his own words from the past, and doubles down at every juncture.

As many in the media touted his boldness and grandiose rhetoric and style, what he said last night was just the “sam ole, same ole” and it was quite difficult to listen to with out doing multiple ‘face palms’ and ‘head on desk’ moments.

Here is an excerpt from the Wall Street Journal, and followed by Newt Gingrich’s summary:

President Barack Obama said Tuesday that his approach to foreign policy was “making a difference,” wading into new rounds of disputes with lawmakers by saying his strategy has paid dividends while countering the advances of extremists in Iraq and Syria.

Mr. Obama’s optimism in his State of the Union Speech comes against a surge of violence and unrest in the Middle East, including an apparent coup attempt in Yemen on Tuesday and renewed fears of foreign fighters returning to Western countries following terrorist killings in Paris earlier this month.

But the president said the techniques advanced by his administration against the Islamic State militant group, also known as ISIL and ISIS, were an improvement over the “costly lessons” of the previous decade-and-a-half.

“Instead of getting dragged into another ground war in the Middle East, we are leading a broad coalition, including Arab nations, to degrade and ultimately destroy this terrorist group,” he said. (Read the rest here.)

Amazingly, while he spoke, the government in Yemen, a country he used as an example of his successes in the recent past was under attack. In addition, a Russian signal intel ship was in Havana Harbor, and Israel had just launched a serious attack in the Golan to take out Hezbollah missile batteries. Out of touch is an extreme understatement.

During the speech, many other other interesting statements were made that belie reality as well, like climate change being our biggest problem as a nation. He also chided the Republicans and said:

We can’t slow down businesses or put our economy at risk with government shutdowns or fiscal showdowns. We can’t put the security of families at risk by taking away their health insurance, or unraveling the new rules on Wall Street, or refighting past battles on immigration when we’ve got a system to fix. And if a bill comes to my desk that tries to do any of these things, it will earn my veto. (Read the full text of the speech here.)

Really Mr. President? Reality check – it was ObamaCare that took coverage away from millions of Americans when it was rolled out and Jonathan Gruber told us we were stupid, basically for believing the “Liar of the Year.” Fantasyland! It really is worth reading it all and then fact-checking.

Then there is the Islamic State – the caliphate is here but apparently Obama has not read history, nor his daily briefings, again.

Even his own sycophants in the media could not believe their ears:

The media broadly praised President Obama’s sixth State of the Union address last night as a “confident” and “ambitious” speech. But even his traditional allies in the press could not ignore the fact that it was a confident speech completely disconnected from the real world.

Here is NBC’s Andrea Mitchell, the network’s senior foreign policy correspondent, on last night’s speech: “I think that on foreign policy, his projection of success against terrorism and against ISIS, in particular, as I said, is not close to reality.” 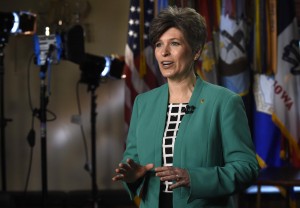 20 Year reserve Lt. Col. and Senator from Iowa, Joanie Ernst delivered the Republican response in style reminding America that the Republicans were just elected to fight Obama’s initiatives and failures.

Chris Matthews, the adoring Obama supporter who once said Mr. Obama’s charisma made him feel “this thrill going up my leg,” commented after last night’s speech, “I keep thinking tonight that there is a world out there that he didn’t really talk about.” That’s putting it gently.

“It seems that the rose-colored glasses through which [President Obama] was viewing the foreign policy were so rose-colored that they don’t even reflect the world that we’re living in … ISIS is doing very well, and the strategy is completely disjointed … To sell that as a success, I think was missing the point, maybe even disingenuous.”

“It sounded like the President was outlining a world that he wishes we were all living in but is very different from the world [described in the news], with terror raids taking place across Europe, with ISIS very much on the move. One thing the President said was that ‘American leadership, including our military power, is stopping ISIL’s advance.’ That just isn’t the case…”

Even senior members of the President’s own party have been unable to stomach some of the President’s claims. Democratic Senator Bob Menendez, the ranking Democrat on the Senate Foreign Relations Committee, this morning described the President’s quotes on Iran as “sound[ing] like talking points that come straight out of Tehran.”

What was striking about President Obama’s speech was his inability to describe radical Islamism as a movement.

He continues to focus on geography instead of ideology. He refers only to “violent extremism.”

He continues to bounce from terror group to terror group as though they’re distinct threats. The current conversation is about ISIL (or ISIS) in Northern Syria and Iraq.

The President failed to mention Boko Haram, however, which last year killed more people in Nigeria (10,000) than Ebola did in all of Africa (8,000). To her credit, Senator Joni Ernst, in a very short reaction speech, did mention Nigeria as a trouble spot.

Ironically, the front pages of today’s newspapers report the State of the Union on one side and the battle in the capital of Yemen on the other side. Yemen is a country President Obama had cited as a model of how we are making progress against “violent extremists.”

Today the Yemeni president “cannot leave his house,” according to the Associated Press, because Islamist rebels are holding him “captive” in his home. The country got no mention last night.

The state of the union, on national security matters at least, is a disaster. A president who tries to hide from the threats we face — or worse, to construct his own world in which they don’t exist — is making the planet a much more dangerous place. One with “confidence” disconnected from reality isn’t showing leadership. He’s showing pure foolishness.