Editor’s Note – You might have seen this video a stunning demonstration of political condescension on the health care front.

In remarks at the 2010 Legislative Conference for the National Association of Counties, House Speaker Nancy Pelosi said,

“But we have to pass the bill so that you can find out what is in it, away from the fog of controversy.” (Heritage) 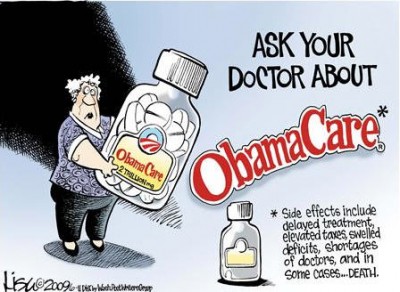 Well the “fog” is gone, and its the second anniversary of it being signed into law, and the ObamaCare nightmare is upon us.

As you can see in the visuals below, its not the package we bargained for. Wait, we did not bargain for it, it was crammed down our throats.

The SCOTUS is now contemplating its validity and Constitutionality, if they do not declare the whole thing void, the the next Congress, and next President must change, and must overturn this debacle.

Why? As Karen Harned points out at Fox News, there are five basic freedoms we will all lose:

1) The American ideal of freedom

Our nation was founded on individual liberty—liberty which is under assault by the health care law. The individual mandate is unprecedented and unconstitutional.

The government has never been able to force Americans to buy something or pay a penalty in the history of this nation. If the individual mandate is upheld, the Constitution will not protect Americans from any mandate Congress wants to impose.

3) The right to own and operate your small business

Small businesses create over 60 percent of the nation’s new jobs. The job market is stagnant and the health care law has had a palpable chilling effect on the sector and caused many small businesses not to hire.

If ObamaCare is upheld, over half of all Americans would be forced onto some type of government-run health-care by the end of the decade. Elite bureaucrats would be in charge of deciding what medical tests you need or should have based on costs. What’s more, these government bureaucrats will also get to decide what kinds of insurance plans will be made available and what businesses must provide in the form of health insurance to their employees.

5) The economic future of this country

ObamaCare is already a significant drag on the nation’s economy and could threaten to sink it even further when the mandate goes into effect in 2014. Not surprisingly, its costs were vastly underestimated during the national debate.

In Pictures: The Impact of Obamacare

Alyene Senger, From the Heritage Foundation’s blog: The Foundry

Today is the official second anniversary of Obamacare’s signing, but there’s little to celebrate. The Heritage Foundation’s re-launched version of “Obamacare in Pictures: Visualizing the Effects of the Patient Protection and Affordable Care Act” shows through new charts and graphs Obamacare’s far-reaching negative effects on Americans

Obamacare in Pictures: Visualizing the Effects of the Patient Protection and Affordable Care Act
View more presentations from The Heritage Foundation

Here are just a few examples of what the series reveals about Obamacare:

It grows dependence on government. Obamacare expands government control over health care by expanding Medicaid and creating new government exchanges. By the year 2020, more than 50 percent of Americans will be enrolled in a government-run health care program.

It hurts jobs and the economy. Obamacare may be the cause of a slowed private-sector recovery. After it was signed into law, job growth in the private sector stalled. Also, Obamacare contains 17 new taxes on Americans that will total $502 billion between 2010 and 2019. Several of these will hit the middle class.

It undermines state authority. Obamacare pushes approximately 20 million additional people onto state Medicaid rolls. Obamacare in Pictures shows the burden of the expansion in the increased Medicaid population and cost to each state. Meanwhile, 26 states have filed a lawsuit challenging the constitutionality of Obamacare’s individual mandate and forced Medicaid expansion.