Obama, the Muslim Brotherhood, and Islam – What is the connection?

Editor’s Note – One of the constant themes that has been shadowing the Obama Administration is his connection and alledged fealty to Islam. From his boyhood education in a Madrassah, to his attendance at the Black Liberation Theology church of Rev. Jeremiah Wright for 20 years, to the curious nature that the Obama’s have not chosen a local Christian Church for the last three years in the DC area, to his frequent visits and speeches about Islam only fuels the charges that he is a ‘closet Muslim’ or a promoter of Sharia Law. He has salaried employees on his staff that have known connections to the Muslim Brotherhood, and his security advisers are more akin to Islamic apologists than they are to concerned advisers who are securing our nation from infiltration by enemies to our Representative Republic.

Please read this well validated essay by Dr. Abdallah, an Egyptian writer who undertsands the issue far better than our media here in the USA. Again, we need to understand Eastern thinking, they understand us, but we do not come close to understanding them.

Note to John Brennan: The Muslim Brotherhood is not a secular group.

Where are the Muslim Brotherhood and the Obama Administration Taking America?

From Elaph via Family Security Matters

In this article, published in the leading liberal pan Arab “Elaph”, Egyptian liberal writer Dr. Essam Abdallah exposes the influence of the Muslim Brotherhood within the Obama Administration and the campaign led by CAIR and its allies against Middle East Christians, US experts and American Muslim reformers. Abdallah’s article is powerful evidence to a reckless policy of backing Islamists, perpetrated by the Obama Administration and its advisors on Islamic affairs. The Editors.

Disturbing reports are coming out of Washington, D.C.

These reports reveal the depth of the below-the-surface coordination between the Council on American Islamic Relations (CAIR), Hamas, Hezbollah, the Iranian regime and the Muslim Brotherhood in Egypt, Syria, Tunisia, Libya and Jordan. This bloc of regimes and organizations is now becoming the greatest Islamist radical lobby ever to penetrate and infiltrate the White House, Congress, the State Department and the main decision making centers of the US government. All of this is happening at a time when the US government is going through its most strategically dangerous period in modern times because of its need to confront the Iranian Mullahs regime, which is expanding in the Middle East, as well as penetrating the United States, via powerful and influential allies.

It looks like the near future will uncover many surprises after the fall of the Gaddafi regime, as we realize more and more that the popular revolts in the Arab world – and the Obama Administration’s position towards them – were determined by political battles between various pressure groups in Washington. Moreover, pressures by these lobbying groups have left an impact on the region’s events, the last of which was the canceling of the visit of Maronite Patriarch Rahi to Washington. A number of Arab and Western news agencies have leaked that one of “those who sought to cancel this visit was Dalia Mujahid, a top advisor on Islamic and Arab affairs at the State Department, who is of Egyptian origin. And that”, said the reports, “came at the request of the high command of the Muslim Brotherhood in Egypt, who wish to see the US Administration support the Islamist Sunni current.” 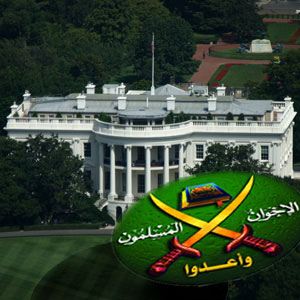 Also very noticeable at this point is the growing domination of Islamist forces around the Mediterranean: the victory of the Nahda Islamist Party in Tunisia, the declaration by (TNC Chairman) Mustafa Abdeljalil that Libya is an Islamist state and the rise of the Muslim Brotherhood in Egypt. These developments wouldn’t have happened without the approval of the United States. A document published in Washington indicated that Egypt will face more violence and tensions while moving to the Pakistani, rather than the Turkish, model. Egypt will be ruled by an opportunistic bourgeoisie and a regime declaring itself Islamist, and it will be backed by a military institution. The military will be used by the Islamists to maintain power but the armed forces, the parliament, the regime and the constitution will all become Islamist.

In return, the Maronite Patriarch is denied a visit to Washington, Coptic Christian churches are destroyed in Egypt, and Coptic demonstrators are massacred at Maspero in Cairo by the Egyptian military, demonstrating that the goal is to suppress Christians in the Middle East, who are – as Patriarch Rahi said – paying a high price for the revolts of the Arab Spring. Rahi expressed his concerns about the fate of Syrian and Lebanese Christians and sees, as does the world, the flight of millions of Iraqi and Middle Eastern Christians from their homelands as a result of events in Iraq, and the methodic persecution against the Copts. The Christians of Egypt aren’t only facing suppression and ethnic cleansing but a form of genocide.

The real question now is: who is allowing the Muslim Brotherhood lobby to damage the relationship between the US Administration and millions of Middle East Christians? This lobby was able to delay meetings between leaders from Coptic Solidarity International, including Magdi Khalil and Adel Guindy, with the US Government. Similar obstructions have been happening with Chaldean and Assyrian delegations over the past few years. Moreover, the Muslim Brotherhood has waged a hysterical campaign against prominent experts in counterterrorism such as Steven Emerson, Daniel Pipes, John Guandolo and Robert Spencer. One particularly rough campaign was waged by CAIR against Professor Walid Phares, one of the most important, and even prescient, experts in counterterrorism and Jihadist movements in the US. In his book, “The Coming Revolution: Struggle for Freedom in the Middle East”, Dr. Phares predicted its evolution and the shape of coming Islamist regimes in the region.

But the Muslim Brotherhood’s campaign is not limited to liberal Arabs, Christians, Jews and Atheists. It has also targeted Muslims who oppose the Ikhwan (Muslim Brotherhood) lobby such as Dr. Zuhdi Jasser, the President of the American Islamic Forum for Democracy (AIFD); Sherkoh Abbas, from the Syrian Kurdish Council; Farid Ghadri; the Somali-American author Ayan Hirsi Ali; Ali al Yammi; Tarek Fatah and many more. Attacking Muslim liberals in the West helps the Muslim Brotherhood’s project in the radical Islamization of the Middle East, but it does not at all help US interests. Oppressing opposition, diversity, pluralism, and shedding human rights and freedoms are in direct contradiction to the values defended, and sacrificed for, by America’s founding fathers as well as by all those who fought wars for America throughout her history.

These intimidation and suppression campaigns directed against Arab and Middle East Christians – and against intellectuals and researchers opposing the Muslim Brotherhood and its sinister ties to Hamas, Hezbollah and Iran – in fact are aimed at America’s ability to become aware of the threat all of them pose to American freedoms. For American strength isn’t only in its navies and military power, but in its Constitution and the laws which provide the moral force for all other distinctly American liberties.

Note that the US Constitution did not include any suppressive articles (regarding freedom of religion or freedom of speech), the lack of which is the case in many Middle Eastern countries. Rather, it was written in the spirit of a Jeffersonian federal democracy based on individual freedoms.

So, all things considered both here and in the Middle East, where exactly are the Obama Administration and the Muslim Brotherhood lobby, together, taking America? And why?