Events concerning the Iran Deal revealed a new low in the Presidency of Obama, and his equally “delusional” Secretary of State, John Kerry. A speech Obama gave yesterday and an interview John Kerry also had this week both insult our intelligence and show how utterly contemptuous and naive each is – all for the ‘legacy from hell’.

This comes on the heels of a speech this week in which Israeli Prime Minister, Benjamin Netanyahu “spoke on a conference call organized by the Jewish Federation of North America (JFNA)” regarding the deal: 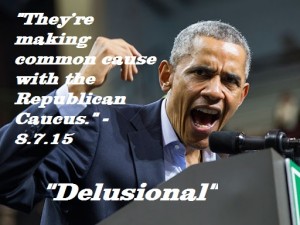 “This deal will bring war,” Netanyahu warned. “It will spark a nuclear arms race in the region. And it would feed Iran’s terrorism and aggression that would make war, perhaps the most horrific war of all, far more likely.”

These are the words of a true world class leader, a man seeking to secure his people over his own ambitions as Obama proves to be in stark contrast in terms of leadership, trust, and class.

Here is what Obama said, igniting a fire storm for being so callous, so filled with haterd for anyone who would dare oppose him:

“I realize that resorting to force may be tempting in the face of the rhetoric and behavior that emanates from parts of Iran. It is offensive. It is incendiary. We do take it seriously. But superpowers should not act impulsively in response to talks… Just because Iranian hardliners chant ‘Death to America” does not mean that that’s what all Iranians believe. In fact, it’s those hardliners that are more satisfied with the status quo.”

“It’s those hardliners chanting “death to America” who’ve been most opposed to the deal. They’re making common cause with the Republican Caucus.” The audience applauded this disgusting statement. (Gateway Pundit)

…and the audience laughed and applauded? This is beneath contempt, and debases the office Obama holds.

Maybe Obama was also telling Netanyahu that he too was part of that “caucus.” But didn’t Obama say that 99% of the world was supporting the deal? Really? Stark delusional mania…we refuse to suspend all disbelief Mr. Obama.

Obama said: “If 99% of the world community and the majority of nuclear experts look at this thing and they say this will prevent Iran from getting a nuclear bomb, and you are arguing either that it does not or that even if it does, it’s temporary then you should have some alternative.” (BBC)

You mean to tell us Mr. Obama that of the 193 nations in the UN, only 1.93 nations do not want this deal? What about Qatar, Israel, the UAE, Egypt – define for us “prevent Iran from getting a nuclear bomb” please, and explain that other fictitious number of 62 nations aiding in the fight against ISIS, that “JV team.”

The esteemed Charles Krauthammer summed it up so well last night:

On “The Kelly File” [last night], Charles Krauthammer said that President Obama comparing Republicans to Iranians chanting “death to America” is a new low for the president.

“It’s vintage Obama. The demonization of his opponents, the lumping them together with people chanting ‘death to America,’ I must say is a new low for the president,” Krauthammer said.

He added that it’s even worse how delusional Obama is by not seeing that the Iranian leaders and mullahs are the hardliners. “How can you negotiate if you have no conception of the real ideology and intentions of your enemy?” Krauthammer asked. (Fox News with video.)

Compounding that utter tripe was the swill Kerry was spewing earlier:

Kerry’s argument confirms the extent to which the Obama administration has become “Iran’s lawyer”–defending Iran’s behavior, adopting its perspective on negotiations, and above all negotiating as if America needed a deal more than the regime.

Another example of defending the indefensible, and like Obama, completely ignores the protestations from the representatives of the people, from both sides of the aisle. Just who does Kerry and Obama represent – it sure isn’t America’s best interests? Where is their fealty to our constitution? But it gets worse: 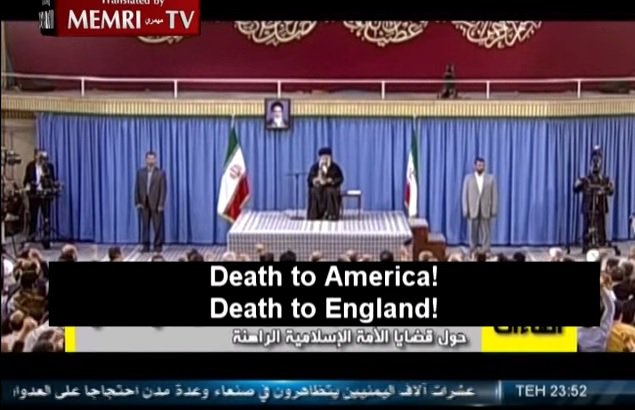 He warned that the “moderate” regime [sic] of Hassan Rouhani would fall if the deal were rejected, and be replaced by a more hard-line one (though it is difficult to point to any way in which Rouhani’s administration is less extremist and violent than its predecessors, except in its language on the global stage).

How could there be a “more hard-line one” Mr. Kerry? Was it not Rouhani who actually led one of those “death to America” rallies? We wonder if Mr. Kerry actually knows who Ayatollah Kamanei, the Supreme Leader is and how this administration has not learned that these evil ‘hard-liners” say what they believe and believe what they say.

History has proven that they tell us what they are going to do, and they do it! But then again, what great negotiators they have proven to be.

In layman’s terms, this is called “negotiating against yourself”–though some critics have begun to speculate openly that Obama wanted all along to boost one of America’s most determined enemies.

Even the liberal media is shaking its head over this lunacy as the interview progressed:

Goldberg, usually a reliable stenographer for an administration he supports, was skeptical of Kerry’s more far-fetched claims. When Kerry boasted that the Iran deal ” is as pro-Israel, as pro-Israel’s security, as it gets,” Goldberg pushed back. When Kerry claimed, falsely, that the U.S. intercepts weapons shipments to Hezbollah, Goldberg challenged him. 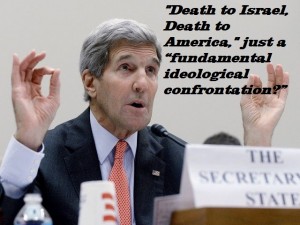 Kerry dismissed concerns–concerns once cited by Obama himself–that Iran’s breakout time to a nuclear weapon will shrink to near-zero after the deal expires in 10 or 15 years. The Secretary of State also cited Iran’s commitment to the Additional Protocol to the Non-Proliferation Treaty as proof that Iran would never build a nuclear weapon.

Bizarrely, Kerry described Iran’s threats of “death to Israel” as “a fundamental ideological confrontation” between the two, as if it were a disagreement of principle rather than an explicit threat to “wipe Israel off the map” (Goldberg fills in the last three words, since Kerry is almost unwilling to say them).

He also said that Iran’s cash windfall from sanctions relief would not help the Assad regime or regional terror groups much: “It’s not money that’s going to make a difference ultimately in what is happening,” Kerry told an evidently stunned Goldberg.  (Read the complete article at Breitbart)

Our question is, where was Obama when in 2009 there was a popular uprising in Iran that soon turned bloody? These were the true moderates, reformists, the youth, the future, who begged Obama for aid, but no, Obama turned his back on them. So much for their future, Israel’s, and ours!

Once again, Obama and Kerry chose the enemies of Israel and America over those who could have toppled that terrorist regime in Tehran back in 2009. Had he aided the uprising, and ramped up sanctions instead of slow walking, or even opposing further sanctions in 2012, things would have been far different today.

Obama and Hillary Clinton did begrudgingly impose sanctions in 2009 and beyond, but always needing to be dragged kicking and screaming. They did relent and went along with massive pressure from a strangely bi-partisan Congress, but today’s rhetoric shows what their true intentions were all along.