Mexican Drug Cartels in over 1,000 US Cities

Honesty comes in small drips from the Department of Justice, but when it does release a statement and document revealing that drug cartels operate in more than 1000 American cities, we need to stand up and take notice. There really is a war on narco-terrorism in key Southern states, yet there is no official declaration of war and it takes place on our soil. There is a true corporate style distribution network in over 230 cities in America and the fight against this industry takes Federal, state and local dollars that add up to a sum that is unknown and probably better left that way, as it has become a failure as it has annual growth and an increase in murder rates.

DHS uses a megaphone with the replay of the same words, the border has never been more secure, but given the numbers, the formal reports at all levels, how can the word ‘secure’ even be printed or spoken? We have a real military style operation going on at the border and a little revealed fact that the FBI, CIA and Special Forces are operating as boots on the ground in key countries below our southern border. Texas has taken an aggressive position with a military strategy that is explained in this 182 pg. report.

The cartels are fully integrated with Middle Eastern terror networks and banks worldwide move the dollars to keep the laundry mission of money as clean and untraceable as possible.

From the Daily Caller 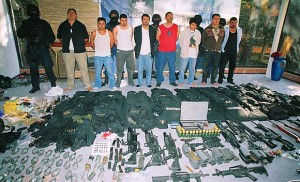 According to the report, the National Drug Intelligence Center (NDIC) assesses with “high confidence” that Mexican-based TCOs “control distribution of most of the heroin, marijuana, and methamphetamine available in the United States” and production of these drugs in Mexico “appears to be increasing.”

However, the report says that an “analysis of law enforcement information reveals variations in the primary type of illicit drugs trafficked by each of the seven main Mexican-based TCOs and the regions of the United States where their operations are concentrated.”

“Mexican-based trafficking organizations control access to the U.S.–Mexico border, the primary gateway for moving the bulk of illicit drugs into the United States,” says the report.

“The organizations control, simultaneously use, or are competing for control of various smuggling corridors that they use to regulate drug flow across the border.”

In October 2010, Secretary of Homeland Security Janet Napolitano said the almost 2,000 mile long southwest border is “more secure than ever before.”

“We have devoted unprecedented amounts of manpower, infrastructure and technology to the southwest border under this administration,” Napolitano said.

“Over the past two years, our seizures of illegal drugs, currency and weapons have increased significantly — helping to make the southwest border more secure than ever before.”

On May 25, 2010, President Obama deployed 1,200 National Guard troops to the U.S.-Mexico border. In May 2011, Obama visited the border and said the security there has improved.

“We have gone above and beyond what was requested by the very Republicans who said they supported broader reform as long as we got serious about enforcement,” Obama said. “But even though we’ve answered these concerns, I gotta say I suspect there are still going to be some who are trying to move the goal posts on us one more time.”

Republican Rep. Michael McCaul of Texas disagreed with Obama, saying that the amount of crime at the southwest border spilling over into the U.S. is “underreported.”

“Before we start talking about reforming our immigration policy we need to prioritize our national security and gain operational control of the border,” he said in a statement. “Despite the president’s rhetoric that he has gone ‘above and beyond’ to secure the border, this mission is not accomplished.”

“Conditions within these border communities along both sides of the Texas-Mexico border are tantamount to living in a war zone in which civil authorities, law enforcement agencies as well as citizens are under attack around the clock,” the report says.

“In addition to gun battles and other violence at ports of entry, southwestern border communities have been subject at times to the massive influx of evacuees and casualties from Mexico — a mix of innocent civilians as well as criminals — all of whom may be fleeing violence.”