A decade of billions in spending in the name of homeland security has armed local police departments with military-style equipment and a new commando mentality. But has it gone too far? Andrew Becker and G.W. Schulz of the Center for Investigative Reporting report.

From the Daily Beast

Nestled amid plains so flat the locals joke you can watch your dog run away for miles, Fargo treasures its placid lifestyle, seldom pierced by the mayhem and violence common in other urban communities. North Dakota’s largest city has averaged fewer than two homicides a year since 2005, and there’s not been a single international terrorism prosecution in the last decade.

But that hasn’t stopped authorities in Fargo and its surrounding county from going on an $8 million buying spree to arm police officers with the sort of gear once reserved only for soldiers fighting foreign wars.

Every city squad car is equipped today with a military-style assault rifle, and officers can don Kevlar helmets able to withstand incoming fire from battlefield-grade ammunition. And for that epic confrontation—if it ever occurs—officers can now summon a new $256,643 armored truck, complete with a rotating turret. For now, though, the menacing truck is used mostly for training and appearances at the annual city picnic, where it’s been parked near the children’s bounce house. 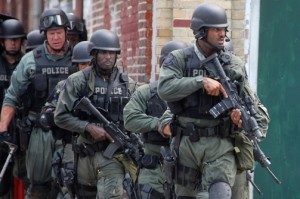 Atlanta Police S.W.A.T. members searched a building for a shooting suspect in July of 2010., John Bazemore

“Most people are so fascinated by it, because nothing happens here,” says Carol Archbold, a Fargo resident and criminal justice professor at North Dakota State University. “There’s no terrorism here.”

Like Fargo, thousands of other local police departments nationwide have been amassing stockpiles of military-style equipment in the name of homeland security, aided by more than $34 billion in federal grants since the Sept. 11, 2001, terrorist attacks, a Daily Beast investigation conducted by the Center for Investigative Reporting has found.

The buying spree has transformed local police departments into small, army-like forces, and put intimidating equipment into the hands of civilian officers. And that is raising questions about whether the strategy has gone too far, creating a culture and capability that jeopardizes public safety and civil rights while creating an expensive false sense of security.

“The argument for up-armoring is always based on the least likely of terrorist scenarios,” says Mark Randol, a former terrorism expert at the Congressional Research Service, the nonpartisan research arm of Congress. “Anyone can get a gun and shoot up stuff. No amount of SWAT equipment can stop that.”

Local police bristle at the suggestion that they’ve become “militarized,” arguing the upgrade in firepower and other equipment is necessary to combat criminals with more lethal capabilities. They point to the 1997 Los Angeles-area bank robbers who pinned police for hours with assault weapons, the gun-wielding student who perpetrated the Virginia Tech massacre in 2007, and the terrorists who waged abloody rampage in Mumbai, India, that left 164 people dead and 300 wounded in 2008.

The new weaponry and battle gear, they insist, helps save lives in the face of such threats. “I don’t see us as militarizing police; I see us as keeping abreast with society,” former Los Angeles Police chief William Bratton says. “And we are a gun-crazy society.”

Adds Fargo Police Lt. Ross Renner, who commands the regional SWAT team: “It’s foolish to not be cognizant of the threats out there, whether it’s New York, Los Angeles, or Fargo. Our residents have the right to be protected. We don’t have everyday threats here when it comes to terrorism, but we are asked to be prepared.”

The skepticism about the Homeland spending spree is less severe for Washington, D.C., Los Angeles and New York, which are presumed to be likelier targets. But questions persist about whether money was handed out elsewhere with any regard for risk assessment or need. And the gap in accounting for the decade-long spending spree is undeniable. The U.S. Homeland Security Department says it doesn’t closely track what’s been bought with its tax dollars or how the equipment is used. State and local governments don’t maintain uniform records either.

To assess the changes in law enforcement for The Daily Beast, the Center for Investigative Reporting conducted interviews and reviewed grant spending records obtained through open records requests in 41 states. The probe found stockpiles of weaponry and military-style protective equipment worthy of a defense contractor’s sales catalog.

In Montgomery County, Texas, the sheriff’s department owns a $300,000 pilotless surveillance drone, like those used to hunt down al Qaeda terrorists in the remote tribal regions of Pakistan and Afghanistan. In Augusta, Maine, with fewer than 20,000 people and where an officer hasn’t died from gunfire in the line of duty in more than 125 years, police bought eight $1,500 tactical vests. Police in Des Moines, Iowa, bought two $180,000 bomb-disarming robots, while an Arizona sheriff is now the proud owner of a surplus Army tank.

The flood of money opened to local police after 9/11, but slowed slightly in recent years. Still, the Department of Homeland Security awarded more than $2 billion in grants to local police in 2011, and President Obama’s 2009 American Recovery and Reinvestment Act contributed an additional half-billion dollars.

Law enforcement officials say the armored vehicles, assault weapons, and combat uniforms used by their officers provide a public safety benefit beyond their advertised capabilities, creating a sort of “shock and awe” experience they hope will encourage suspects to surrender more quickly.

“The only time I hear the complaint of ‘God, you guys look scary’ is if the incident turns out to be nothing,” says West Hartford, Conn., Police Lt. Jeremy Clark, who organizes an annual SWAT competition.

A grainy YouTube video from one of Clark’s recent competitions shows just how far the police transformation has come, displaying officers in battle fatigues, helmets, and multi-pocketed vests storming a hostile scene. One with a pistol strapped to his hip swings a battering ram into a door. A colleague lobs a flash-bang grenade into a field. Another officer, holding a pistol and wearing a rifle strapped to his back, peeks cautiously inside a bus.

The images unfold to the pulsing, ominous soundtrack of a popular videogame,Call of Duty: Modern Warfare 2. Though resembling soldiers in a far-flung war zone, the stars of this video are Massachusetts State Police troopers.

The number of SWAT teams participating in Clark’s event doubled to 40 between 2004 and 2009 as Homeland’s police funding swelled. The competition provides real-life scenarios for training, and Clark believes it is essential, because he fears many SWAT teams are falling below the 16 hours of minimum monthly training recommended by the National Tactical Officers Association.

“Luck is not for cops. Luck is for drunks and fools,” Clark said, explaining his devotion to training.

One beneficiary of Homeland’s largesse are military contractors, who have found a new market for their wares and sponsor training events like the one Clark oversees in Connecticut or a similar Urban Shield event held in California.

“As criminal organizations are increasingly armed with military-style weapons, law enforcement operations require the same level of field-tested and combat-proven protection used by soldiers and Marines in Iraq, Afghanistan, and other high-risk locations,” boasts an Oshkosh Corp. brochure at a recent police seminar, where the company pitched its “tactical protector vehicle.”

The trend shows no sign of abating. The homeland security market for state and local agencies is projected to reach $19.2 billion by 2014, up from an estimated $15.8 billion in fiscal 2009, according to the Homeland Security Research Corp.

The rise of equipment purchases has paralleled an apparent increase in local SWAT teams, but reliable numbers are hard to come by. The National Tactical Officers Association, which provides training and develops SWAT standards, says it currently has about 1,650 team memberships, up from 1,026 in 2000.

Many of America’s newly armed officers are ex-military veterans from the front lines of Iraq and Afghanistan. Charles Ramsey, who was police chief in Washington, D.C., on 9/11, upgraded the weaponry when he moved to Philadelphia in 2008. Today, some 1,500 Philly beat cops are trained to use AR-15 assault rifles.

“We have a lot of people here, like most departments, who are ex-military,” Ramsey says. “Some people are very much into guns and so forth. So it wasn’t hard to find volunteers.”

Some real-life episodes, however, are sparking a debate about whether all that gear also creates a more militarized mind-set for local police that exceeds their mission or risks public safety.

In one case, dozens of officers in combat-style gear raided a youth rave in Utah as a police helicopter buzzed overhead. An online video shows the battle-ready team wearing masks and brandishing rifles as they holler for the music to be shut off and pin partygoers to the ground.

And Arizona tactical officers this year sprayed the home of ex-Marine Jose Guerena with gunfire as he stood in a hallway with a rifle that he did not fire. He was hit 22 times and died. Police had targeted the man’s older brother in a narcotics-trafficking probe, but nothing illegal was found in the younger Guerena’s home, and no related arrests had been made months after the raid.

In Maryland, officials finally began collecting data on tactical raids after police in 2008 burst into the home of a local mayor and killed his two dogs in a case in which the mayor’s home was used as a dropoff for drug deal. The mayor’s family had nothing to do with criminal activity.

Such episodes and the sheer magnitude of the expenditures over the last decade raise legitimate questions about whether taxpayers have gotten their money’s worth and whether police might have assumed more might and capability than is necessary for civilian forces.

“With local law enforcement, their mission is to solve crimes after they’ve happened, and to ensure that people’s constitutional rights are protected in the process,” says Jesselyn McCurdy, senior legislative counsel for the American Civil Liberties Union. “The military obviously has a mission where they are fighting an enemy. When you use military tactics in the context of law enforcement, the missions don’t match, and that’s when you see trouble with the overmilitarization of police.”

The upgrading of local police nonetheless continues. Arizona Sheriff Joe Arpaionow claims to operate his own air armada of private pilots—dubbed Operation Desert Sky—to monitor illegal border crossings, and he recently added a full-size surplus Army tank. New York Police Commissioner Ray Kelly boasted this fall he had a secret capability to shoot down an airliner if one threatened the city again. And the city of Ogden, Utah, is launching a 54-foot, remote-controlled “crime-fighting blimp” with a powerful surveillance camera.

Back in Fargo, nearby corn and soybean farmer Tim Kozojed supports the local police but questions whether the Homeland grants have been spent wisely. ”I’m very reluctant to get anxious about a terrorist attack in North Dakota,” Kozojed, 31, said. “Why would they bother?”