Know thy enemy…not his propaganda

Editor’s Note – Clare Lopez is a senior fellow at the Clarion Fund and a strategic policy and intelligence expert with a focus on the Middle East, national defense and counterterrorism. Lopez began her career as an operations officer with the Central Intelligence Agency (CIA).

Clare is also a close friend and frequent contributor to SUA.

Know thy enemy…not his propaganda:

Imagine our military forcing cadets before World War II to visit a Shinto Shrine in Hawaii to understand the Japanese, or forcing them to visit the German American Bund, an American Nazi party sympathizer group in Buffalo to get to know the Nazis, or any number of Communist Party meetings in the USA during the Cold War so they could identify with their nemeses.

Sheer lunacy and madness! Ignorance of ones enemies is not a good battle plan…

The U.S. military is in a full-fledged retreat that is marked by such desperation that it qualifies as a rout. No, not the retreat from Afghanistan, where Afghans in uniform are attacking, killing, and wounding American and other coalition troops with increasing frequency as the grip of Islamic Law tightens like a noose around the country.

Not the one in Iraq, either, where an Iranian puppet regime now seems powerless to stop the wave of al-Qa’eda suicide bombings and sits waiting for the next civil war to explode anew. No, the most ignominious retreat that the U.S. military currently is involved in is the one which has top Pentagon officials ordering Defense Department schools to purge all training content that would actually inform military students about the enemy threat doctrine of Islamic jihad and its shariah origins.

The stated objective of the dhimmified behavior is to ensure that American warriors never get the idea that the U.S. is at war with Islam—or apparently any realization that Islam is at war with the U.S. either.

Chairman of the Joint Chiefs of Staff, General Martin E. Dempsey, has ordered all Department of Defense (DoD) curricula to be reviewed for anything “disrespectful of the Islamic religion.” Pentagon spokesman Captain John Kirby added helpfully (if not especially grammatically) that the U.S. is “at war with terrorism, specifically with Al Qaeda, who has a warped view of the Islamic faith.”

The surrender statements followed complaints about “anti-Islam” themes which allegedly had been presented in a class called “Perspectives on Islam and Islamic Radicalism,” taught at the Joint Forces Staff College in Norfolk, VA.

In effect, the scrubbing of truthful — if difficult — material about what is really contained in Islamic doctrine, law and scripture that so motivates the forces of Islamic jihad will bring the U.S. military into compliance with Islamic law on slander. It also brings DoD into line with the capitulation-to-Islam campaigns already underway at the Departments of Homeland Security, Justice and State as well as throughout the Intelligence Community. 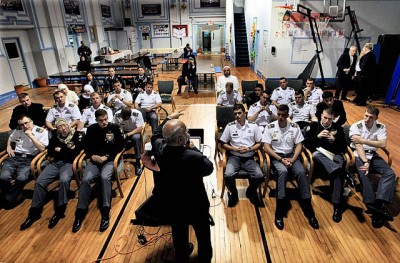 Under Islamic law (sharia), “slander” means “to mention anything concerning a person [a Muslim] that he would dislike.” The sayings of the Muslim prophet Muhammad (the hadiths) also discuss slander:

“Do you know what slander is?” They answered, “Allah and His Messenger know best.” He said, “It is to mention of your brother that which he would dislike.” Someone asked, “What if he is as I say?” And he replied, “If he is as you say, you have slandered him, and if not, you have calumniated him.” – Sunan Abu Dawud

Whether these top-ranking DoD officials realize it or not, their actions in purging military training courses of truthful material that a Muslim “would dislike” (because it reflects badly on Islam), is, in fact, tantamount to submission to Islamic law at a time when enemy forces these troops must confront on the field of battle fight precisely in the name of that law (sharia).

Not content to confine its capitulation campaign to the mid-level officer ranks, DoD also aims to set military mindsets straight about Islam early on. West Point cadets continue to participate in what apparently has become a staple of their academy experience: a visit to the Islamic Center of New Jersey, a mosque with a long list of questionable associations and statements by members of its congregation and leadership.

The April 2012 visit by some 23 West Point cadets in U.S. military uniforms to this mosque featured gender separation of the men and women students as well as photographing the women in head scarves, for prominent placement in leading American newspapers. The one-time Imam of this Islamic Center, Sayyid Askar, proclaimed in 2000 that “jihad is an absolute obligation upon those whose land has been occupied.”

And finally, just to make sure that the ranks of the U.S. military better reflect the ethnic diversity not just of the USA, but of places where they may eventually serve, the U.S. Navy SEALs and SWCCs (Special Warfare Combatant-Craft Crewmen) are now recruiting at swim programs … in Dearborn, Michigan. That’s right: The U.S. Navy SEALs are looking for young recruits in neighborhoods that are home to large concentrations of Arab-Americans, some of whom hail from family backgrounds in southern Lebanon.