It is a mystery why President Obama wanted to release the Taliban five, yet sent a drone to kill Anwar al Awlaki, an American citizen in Yemen. He also sent in Seal Team Six to get Osama bin Laden in Pakistan, spiked the ‘football’ about it endlessly, yet he has said or done nothing about Abu Bakr al-Baghdadi, the leader of ISIL (Aka ISIS) in Iraq.

Many experts consider al-Baghdadi to be more dangerous than Osama bin Laden ever was, the “most powerful jihadi leader,” and that he hates the United States and Israel with more fervor to boot. In Syria ISIS suffered some great setbacks, yet they are now resurgent in Iraq and eastern Syria, creating what can now be called a new nation-state about the size of Syria and growing.

Iran’s armed forces are not likely to prevail in any attempt to retake what was newly seized, nor are they likely to hold other contested areas.

Now the second largest city in Iraq has fallen to ISIL, Mosul, with 500,000 refugees, in a lightening fast victory (The story in pictures can be seen here).

As many as 500,000 people have been forced to flee the Iraqi city of Mosul after hundreds of Islamist militants took control of it, the International Organization for Migration (IOM) says. Troops were among those fleeing as the jihadists from the ISIS group took the city and much of Nineveh province. The head of the Turkish mission in Mosul and dozens of consulate officials have been seized. PM Nouri Maliki has asked parliament to declare a state of emergency.

Then Tikrit (Birth place of Saddam Hussein) just fell today to the al Qaeda linked group. Is Baghdad next? US arms and a lot of equipment are now in their hands, including helicopters. Will the British or US come to Maliki’s aid? The Brits say yes – ‘no question’ says British Foreign Secretary William Hague. 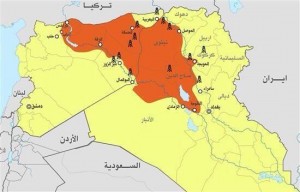 ISIL is unconcerned with international borders because they know they were arbitrarily set decades ago and recognize only the clan/tribe claims of old, but now they have redrawn the map for all intents and purposes. This outcome was foreseeable, and swelled and shrunk back only to reemerge stronger than ever. Tyler Durden at Zerohedge posted the following:

As reported earlier, and as most know by now, as if out of nowhere the al-Qaeda faction Islamic State of Iraq and al-Sham (ISIS) has, over the past 24 hours, stormed across northern Iraq, taken over key northern cities and even taken control over countless modern US weapons and military equipment including Humvees and Blackhawk helicopters. As we further reported, after looting nearly half a billion from the Mosul central bank, ISIS is also the “world’s richest terror force.” So weapons? Check. Money? Check.

In what was one prime Obama foreign policy failure in the past, not securing a new “Status of Forces” agreement before leaving Iraq, the fruits of the boondoggle are now apparent. What do we say for the $18 billion in treasure spent and 4,487 dead Americans, along with thousands of the maimed and wounded who are now seeking care from a domestic failure at home in the Veterans Administration, all just to give Iraq right back to the most evil and violent people on Earth?

Can anyone define Obama/Clinton/Kerry foreign policy for us? Now, thanks to them, Afghanistan will become a Taliban/al Qaeda stronghold again, Iraq is now in worse shape than when Saddam Hussein was dictator, Libya has no government, Syria is a bloody mess without end in sight, and Egypt is on its second government since Mubarak fell. Now the Saudis are mad at us, Israel has been thrown under the bus, Lebanon teeters, yet Qatar is his ‘go to’ team.

Didn’t we hear that al Qaeda was on the run in 2012? Yet Benghazi is a “bogus scandal,” and “Dude, this was two years ago. We’re still talking about the most mundane thing.” – Tommy Vietor. Don’t you feel safer now, with the “dudes” generation counseling and running this administration?

Do you feel safe about future prospects for national security if Hillary Clinton becomes President? She did hire the “dude,” Tommy Vietor, for “Benghazi spin control” in preparation of the Benghazi Select Committee Hearings soon to begin. Dudes, we cannot afford any more “dude advice” and glaring “dude” foreign policy failures.

Political reform in Iraq will stem the rise of Islamists

Earlier this year, as the Islamic State of Iraq and the Levant (ISIL) suffered major defeats by various rebel groups in Syria, it raised a defiant slogan: “Remaining and expanding”. A few months later, the slogan does not look as detached from reality as it used to. The group, arguably the most brutal in the region, is now in control of large swathes of lands stretching from Aleppo to Raqqa to Deir Ezzor, in Syria, and from Ramadi to Fallujah and Mosul, in Iraq. 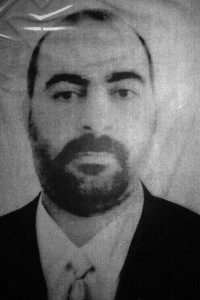 The group’s remarkable successes defy basic military instincts. Consider the type of adversaries ISIL has fought since December. It fought the Iraqi army, backed by battle-hardened Shiite militias as well as Sunni tribal forces, and it unsuccessfully fought the militia in Anbar. In Syria, secular, Islamist and Al Qaeda-affiliated rebels fought ISIL in Aleppo, Idlib and Deir Ezzor, with little success except in Idlib. And yet, the group is still as strong as ever.

So the pressing question is: how can this numerically small group control large areas in two countries? Three main reasons can be identified for its resilience and expansion.

The first is the inconsistency of its opponents. In Iraq, the revival of the group since it was essentially wiped out in the wake of the country’s civil war in 2006 and 2007 was made possible in large part due the imprudent policies of prime minister Nouri Al Maliki. The biased anti-terror laws as well as the tendency to employ sectarian rhetoric in military campaigns against militancy in Sunni areas, as he did in his speech in December, have estranged the Sunni population, which has played into ISIL’s hands.

These policies lead Sunnis, even while they dislike ISIL, to feel they have no stake in fighting ISIL or resisting its presence because the government is just as bad. Additionally, there is a growing sense among Shiites that they have no stake in fighting in Sunni areas and leaving their areas exposed to danger. That leaves the Iraqi government forces with little appetite to face a brutal and resilient militia.

In Syria, ISIL’s opponents have not stood together, even on a factional level, in the fight against the group. Although ISIL has killed and humiliated the leaders of major rebel groups, many Islamists were reluctant to fight a fellow jihadi group rather than focus on the fight against the regime – regardless of ISIL’s day-to-day acts. This helped the group to establish a cult of fear across Syria, despite its relatively low numbers. The fear was broken as many groups declared war against ISIL, but the group has already become resilient and hard to defeat.

The second reason is, simply put, the clarity of its ideology and approach compared to other Islamists. In a business lingo, why would a potential buyer wait for a building planned for construction by a company that might and might not build it, when there is a building already under construction? The fact that ISIL has already announced an “Islamic state” that Muslims can join, and fight for its survival and expansion, appeals to a considerable number of people – even though its brutal tactics have alienated others.

ISIL is quietly expanding its following in the villages and towns dotting the Iraqi-Syrian border mostly because of the perceived reality of an Islamic state. In recent interviews with ISIL associates or their family members, it is clear that the group’s rigid yet clear ideology appeals to an increasing number of young people. These fighters currently travel to hotspots to fight with ISIL, and are not necessarily busy imposing its ideology in their hometowns.

The third reason is the group’s ability to gain substantial funding. As most jihadist groups, ISIL justifies extortion, ransom payments, takeover of weapons from fellow rebels and monopoly of resources by the fact that it considers itself as the only legitimate Islamic entity that represents the interests of Sunni Muslims. It acts as a state and other fighters can either pledge allegiance to it or be considered legitimate targets. While other rebel groups fight the regime, ISIL has busied itself with taking over areas under rebel control, seizing weapons from rebels under various pretexts. In eastern Syria, ISIL has taken control of oilfields, gas plants, factories and other lucrative resources.

Donors with deep pockets also prefer to sponsor an Islamic state in the making rather than a project for one. This tendency reflects an ongoing debate among Islamists from across the spectrum, mainly that attempts to establish an Islamic state by pragmatic groups through peaceful means have consistently failed thanks to an unreceptive regional and international political order. While such reality does not necessarily draw existing political Islamists towards the extreme, it encourages new recruits to join or support the more “realistic” forces to hit their enemies where it hurts.

As far as the recent events around Mosul are concerned, a caveat is in order. ISIL was not the only force that took part in the overrunning of Iraq’s security forces, even though it might be convenient for everyone to portray it as such. There are reports that other forces – including a Sufi-Baathist militia known as the Army of the Men of the Naqshbandi Order, which appeals to many Iraqi Sunnis as they offer a nationalist alternative to the brutish ISIL – have played a central role. In 2009, US officials warned that ISIL might be more dangerous than Al Qaeda because it had managed to build roots within society. The group was mostly based in Mosul and Kirkuk, the sites of this week’s advances.

Where does Iraq go from here? Given the recent performance of the Iraqi army, Baghdad is unlikely to be able to regain ground from these militias. The situation in northern Iraq resembles that of northern Mali in the early months of 2012, when insurgent groups overran government forces and took control of the region. The way to counter the influence of ISIL might be just what happened in Mali, a foreign military to pave the way for a peace deal. But a lasting solution could not be clearer: alongside a military campaign, Baghdad must be pressured into carrying out substantial and real reforms to include Sunnis in the political process.

Hassan Hassan is a Middle East analyst based in Abu Dhabi