Editor’s Note – As President Obama was interviewed by Jon Stewart on the Daily Show, purportedly for the last time, Obama tried to tell America again that the IRS Scandal was not a scandal.

Just like he did with Bill O’Reilly in the now infamous “Super Bowl” interview that there was “Not even mass corruption. Not even a smidgeon of corruption,” he doubles down despite mounting, and incontrovertible evidence to the contrary.

President Obama defended the IRS Tuesday in an interview with “Daily Show” host Jon Stewart, saying the tea party-targeting scandal was actually Congress‘ fault for passing “a crummy law” and that the real problem is the agency doesn’t have enough money.

Mr. Obama, who has overseen a series of scandals at the IRS, the Veterans Administration, the Bureau of Alcohol, Tobacco, Firearms and Explosives and now the Office of Personnel Management, was asked why government didn’t seem to be working on his watch.

But the president said he’s not to blame, using the IRS as an example of how what went wrong wasn’t his fault, and questioning whether tea party groups were ever targeted. (Read more at the Washington Times.)

The trouble is, that could not be farther from the truth. Judicial Watch, as always, exposes yet another ‘smoking gun’ document that proves how much Obama stretches the truth far past the breaking point of the term LIE!

Watch Obama and Stewart on the Daily Show here. 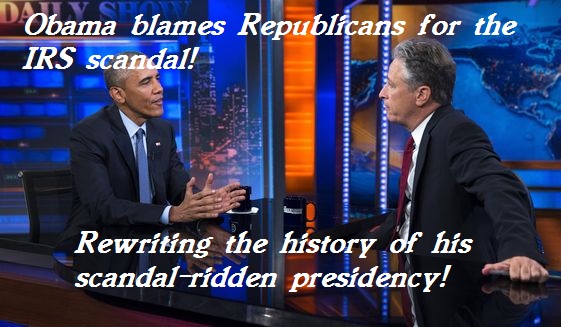 It is just astounding, remember these facts:

One has to wonder what Obama must be thinking to believe he can tell such a blatant whopper in such cavalier fashion and not be called on it. A quick search of media coverage of the targeting scandal reveals the May, 2013 article in The Washington Post with the headline, “IRS admits targeting conservatives for tax scrutiny in 2012 election.”

“The Internal Revenue Service on Friday apologized for targeting groups with ‘tea party’ or ‘patriot’ in their names,” reported the Post, “confirming long-standing accusations by some conservatives that their applications for tax-exempt status were being improperly delayed and scrutinized.” (Read more at Western Journalism.)

Please read on about what Judicial Watch found and then refresh your memory with 19 facts that prove he is a liar and rewriting history to an audience of mush heads that gets their news from a comedian below:

Judicial Watch announced today that it has obtained documents from the Internal Revenue Service (IRS) that confirm that the IRS used donor lists to tax-exempt organizations to target those donors for audits.  The documents also show IRS officials specifically highlighted how the U.S. Chamber of Commerce may come under “high scrutiny” from the IRS.

The IRS produced the records in a Freedom of Information lawsuit seeking documents about selection of individuals for audit-based application information on donor lists submitted by Tea Party and other 501(c)(4) tax-exempt organizations (Judicial Watch v. Internal Revenue Service (No. 1:15-cv-00220)). 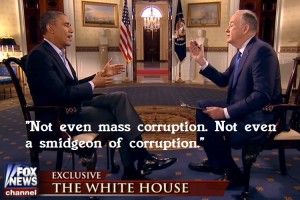 In 2010, after receiving Baucus’s letter, the IRS considered the issue of auditing donors to 501(c)(4) organizations, alleging that a 35 percent gift tax would be due on donations in excess of $13,000.  The documents show that the IRS wanted to cross-check donor lists from 501(c)(4) organizations against gift tax filings and commence audits against taxpayers based on this information.

A gift tax on contributions to 501(c)(4)’s was considered by most to be a dead letter since the IRS had never enforced the rule after the Supreme Court ruled that such taxes violated the First Amendment.  The documents show that the IRS had not enforced the gift tax since 1982.

But then, in February 2011, at least five donors of an unnamed organization were audited.

The documents show that Crossroads GPS, associated with Republican Karl Rove, was specifically referenced by IRS officials in the context of applying the gift tax.  Seemingly in response to the Crossroads focus, on April 20, IRS attorney Lorraine Gardner emails a 501(c)(4) donor list to former Branch Chief in the IRS’ Office of the Chief Counsel James Hogan. Later, this information is apparently shared with IRS Estate Gift and Policy Manager Lisa Piehl while Gardner seeks “information about any of the donors.”

Emails to and from Lorraine Gardner also suggested bias against the U.S. Chamber of Commerce.  An IRS official (whose name is redacted) emails Gardner on May 13, 2011, a blog post responding to the IRS targeting of political and other activities of 501(c)(4), (5) and (6) organizations:

The U.S. Chamber of Commerce is a 501(c)(6) organization and may find itself under high scrutiny.  One can only hope.

The subject line of the email highlights this anti-Chamber of Commerce comment:  “we are making headlines notice the end regarding 501(c)(6) applicability enjoy.”  This critical comment is forwarded to other IRS officials and shows up attached to another Gardner IRS email chain with the subject line “re: 501(c)(4)” that discusses a pending decision about a tax-exempt entity.

In early May, once the media began reporting on the IRS audits of donors, IRS officials reacted quickly.  One official acknowledges the issue “is a biggy” when a reporter from The New York Times contacts the IRS on May 9.

On May 13, 2011, former IRS Director of Legislative Affairs Floyd Williams discusses compliance with “interest” from Capitol Hill: “Not surprisingly, interest on the hill is picking up on this issue … with Majority Leader Reid’s office, has suggested the possibility of a briefing for the Senate Finance Committee staff on general issues related to section 501(c)(4) organizations I think we should do it as interest is likely to grow as we get closer to elections.”

Lerner’s involvement and support for the new gift tax contradicts the IRS statement to the media at the time that audits were not part of a “broader effort looking at donations 501(c)(4)’s.”  In July 2011, the IRS retreated and soon-to-be Acting IRS Commissioner Steven Miller directed that “examination resources should not be expended on this issue” and that all audits of taxpayers “relating to the application of gift taxes” to 501(c)(4) organizations “should be closed.”

“These documents that we had to force out of the IRS prove that the agency used donor lists to audit supporters of organizations engaged in First Amendment-protected lawful political speech,” said Judicial Watch President Tom Fitton.  “And the snarky comments about the U.S. Chamber of Commerce and the obsession with Karl Rove’s Crossroads GPS show that the IRS was targeting critics of the Obama administration.  President Obama may want to continue to lie about his IRS scandal.  These documents tell the truth – his IRS hated conservatives and was willing to illegally tax and audit citizens to shut down opposition to Barack Obama’s policies and reelection.”

Judicial Watch had filed a separate lawsuit for records about targeting of individuals for audit in November 2013.  In that litigation, the IRS had refused to search any email systems, including Lerner’s records. A federal court ruled the IRS’ search was sufficient and dismissed the lawsuit earlier this month.

In September 2014, another Judicial Watch FOIA lawsuit forced the release of documents detailing that the IRS sought, obtained and maintained the names of donors to Tea Party and other conservative groups. IRS officials acknowledged in these documents that “such information was not needed.” The documents also show that the donor names were being used for a “secret research project.”

The House Ways and Means Committee announced at a May 7, 2014, hearing that, after scores of conservative groups provided donor information “to the IRS, nearly one in ten donors were subject to audit.”  In 2011, as many as five donors to the conservative 501(c)(4) organization Freedom’s Watch were audited, according to the Wall Street Journal. Bradley Blakeman, Freedom’s Watch’s former president, also alleges he was “personally targeted” by the IRS.

Read the facts here from Forbes: