Editor’s Note – The following report was the subject of last night’s “Cowboy Logic” radio program on WDFP, and was hosted by Donna Fiducia and Don Neuen.

Their guests were the authors of the report and the show was riveting. You will learn things here that no outlet in the United States can provide.

Col. Najjar is a former Intelligence officer from Lebanon during the civil war there. He is now a long time US citizen and is a Lebanese Christian. He is also a member of the SUA Kitchen Cabinet and Col. Najjar is SUA’s International Intelligence Director.

As MG Vallely says, “I do not go anywhere overseas without Col. Najjar.” It was Col. Najjar who arranged the visit inside war torn Syria to the embattled city of Aleppo last year for himself and MG Vallely. 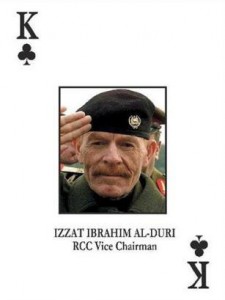 “Cowboy Logic” WDFP Radio is the flag ship radio program of MG Vallely and Stand Up America US.

General Izzat Ibrahim al-Douri, the King of Clubs, is back and leading the Sunni Insurgency with the backing of the Iraqis national tribes, units of the Republican Guards and the Fedayeen of Saddam.

Both nationalistic and religious units are at odds with each other, two different trajectories – ISIS being led by Al Baghdadi wants the Caliphate, others (The Sunnis led by al-Douri) want the return of the old Iraq.

They are fighting together in the same trench and the same battle filed to remove Iran’s influence in the area and abolish the Iraqi/Maliki government in Baghdad.

Al-Douri first escaped out of Iraq in April 2003 and took refuge in Aleppo, Syria where he has planned and led the offensive/killing operations against the Shia and civilians throughout Iraq.

He has many dedicated officers and soldiers from the Saddam days and new recruits who make up his staff, field commanders and foot soldiers.

The precision and timely attack operations of the Iraqi tribes and former Iraqi army units is due to his planning and operational control. He also works closely with Saddam’s daughter.

Currently, they are conducting their operations from a command and control HQ from a clandestine location in Jordan. 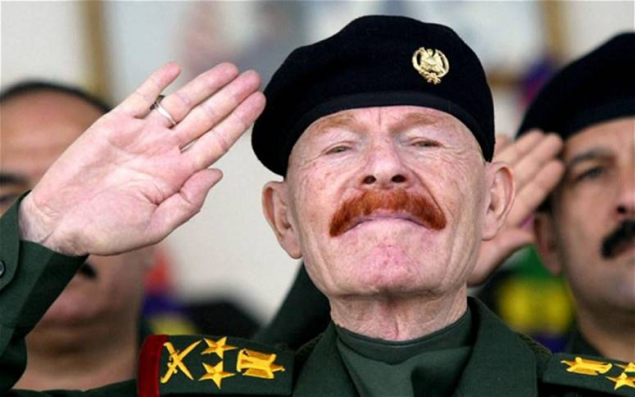 General Izzat Ibrahim al-Douri – the ‘King of Clubs’ of Iraq

Footnote: Now, after a decade as a fugitive, and believed by many to be dead, General Izzat Ibrahim al-Douri – one of the late Iraqi dictator’s most trusted Generals and confidants – has emerged as the spiritual and power figurehead of the movement dedicated to restoring Iraq’s current revolution against Iran’s take over.

The 70 year-old, on whose head the US set a $10 million bounty and who helped Saddam lead his 1968 coup, is leading a group of regime Sunni die-hards.

The action over the last 72 hours  was not an ISIS instigated show, rather ISIS jihadists are trying to climb on board and hijack the Iraq insurgency train towards a major Caliphate upsurge across the Middle East. What we are witnessing in Iraq is a major Rebellion in the move with more than 50% of the forces fighting are the Iraqi Sunni tribes allied with Duri.

Overwhelmingly drawn from the Sunni Muslim minority, their stated goal is to topple the Shia-dominated government of President Nouri-al Maliki, which they believe has been left vulnerable since the departure of US troops from Iraq 18 months ago and ensure that Iran will not dominate the region.

They are united against a common enemy for the moment, but there are strong tensions between the Iraqi loyalists’ tribes /al- Douri and ISIS and after the fall of Baghdad there will be a deterrence show between the two groups for command and control.

This is based on recent intelligence reports to the Middle East Liaison Team (MELT) from Stand Up America organization headed up by MG Paul Vallely and Col. Nagi Najjar.

Listen to the show here: