In Defense of Dakota Meyer — An American Hero

Dakota Meyer, former Marine Corps sergeant, infantryman, and Medal of Honor winner for his actions in Afghanistan, is engaged in a new battle right here at home in America. It’s not against an enemy who is hard to pinpoint and engage, but rather against a defense industry titan – BAE Systems, a UK firm which is solidly entrenched in providing services and technology to our own Department of Defense and military services.

I’m a retired Marine who spent over 3 and a half years in combat in Vietnam. I’ve seen well trained, disciplined, brave Marines face torrents of enemy fire engaged in an assault or in defending a position about to be overrun. But I’ve never seen the bravery as cited in Mr. Meyer’s Medal of Honor citation.

Here’s how the New York Times reported on the ceremony when Mr. Meyer received his medal on September 15:

“President Obama awarded the Medal of Honor on Thursday to a young former Marine who ignored orders to stay put and fought his way five times into an ambush in an Afghan ravine, helping to rescue three dozen Afghan and American troops and to recover the remains of four dead American servicemen.”

Throughout the long battle, Mr. Meyer, who is one of six service members (three living and three deceased) to have received the Medal of Honor for actions in Afghanistan, continuously put himself in harm’s way, focused not on himself but on his comrades.

He is clearly a Marine’s Marine – the best of the best and the first living Marine to earn the award since Vietnam. 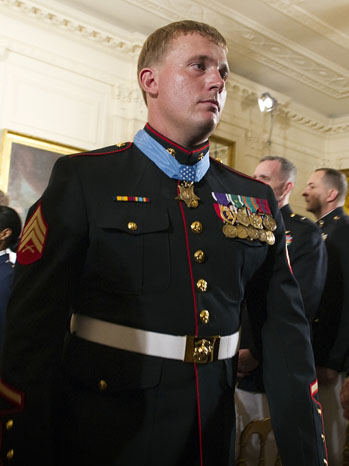 And now it’s one Marine against one industry giant. From where I sit, as a former Marine Lieutenant Colonel, the odds couldn’t be better for Mr. Meyer.

As background, and as reported by the Wall Street Journal and others, Mr. Meyer briefly worked with BAE before resigning in protest over their proposed sale of high technology thermal-imaging rifle scopes to the Pakistani military. These scopes were so high tech, according to Mr. Meyer, that it was better than the equipment currently being provided to U.S. combat forces in Afghanistan.

According to the Wall Street Journal, in an e-mail sent to his superiors while still employed at BAE, Mr. Meyer expressed his disapproval of the proposed sale.

“‘We are taking the best gear, the best technology on the market to date and giving it to guys known to stab us in the back,” Sgt. Meyer wrote to [supervisor] Mr. [Bobby] McCreight, according to the lawsuit. ‘These are the same people killing our guys.’

While in the Marines, Sgt. Meyer had served along the Pakistan-Afghanistan border.”

For his honesty Meyer suddenly became something of a pariah, often berated, belittled, and ultimately taunted by his immediate superior about his pending Medal of Honor award.

When he sought new employment after leaving BAE, the superior characterized him as “mentally unstable” and having a “problem related to drinking,” according to a lawsuit filed last week by Mr. Meyer against BAE. Not surprisingly, he didn’t get the job.

In taking a stand against giving technology to those who might use it against us, Mr. Meyer is again demonstrating the core values which he exhibited in winning the Medal of Honor – care, concern, and devotion for the lives of his fellow Americans on the battlefield.

And while this battle may instead be fought in a courtroom, Mr. Meyer is not backing down. In fact, he’s fully engaged.

His legal team surely knows that BAE will exhaust any and all resources if necessary to win.

In contrast, Mr. Meyer likely doesn’t have deep pockets. He was working a construction job when President Obama called him to say he’d won the Medal of Honor.

None-the-less, his legal team has signed on, and it’s likely not because they don’t believe he has a strong case. By all outward appearances he does.

It’s also likely that BAE will quickly realize they are in a losing battle on many fronts. First, they are engaging a Medal of Honor winner and accusing him of being unstable and a problem drinker. If either or both are true, he should have been confronted, counseled, and possibly let go before he resigned.

Instead, after he resigned, an employee at BAE chose to disparage his character in a conversation with the government and with a new potential employer. BAE will surely lose the public relations war on this front, and maybe the legal one too.

Secondly, if the rifle scopes BAE are trying to sell to Pakistan are indeed better than what our own forces have, their problem suddenly gets much bigger!

Mr. Meyer is absolutely correct when he notes that some of the scopes may well be used against our forces. BAE is providing high technology, battlefield gear to potential enemies! This in its own right is an absolute public relations disaster for BAE, irrespective of how many other defense contractors are doing similar sales. It’s BAE who will be in the news, not them.

Finally, it’s BAE’s assertion that it’s not the company who decides what equipment can be sold to Pakistan but rather the State Department.

As The Wall Street Journal reported, “It wasn’t clear Monday whether the U.S. ever provided high-tech thermal scopes to Pakistan. Mr. Roehrkasse, the BAE spokesman, said the decision to sell defense equipment is made by the State Department, not BAE. ‘In recent years, the U.S. government has approved the export of defense related goods from numerous defense companies, including BAE systems, to Pakistan as part of the United States’ bilateral relationship with that country,’ he said.”

It’s a safe bet that BAE has surely marketed aggressively to sell the technology and is simply awaiting State Department approval.

The fact is, as we learned during the Clinton presidency, when advanced, sensitive space and satellite technology was sold to China, nothing should get in the way of a good sale to a willing buyer! Nothing. It’s a credo which BAE seems to stand by.

There is no upside for BAE when taking on a fight with Dakota Meyer, Medal of Honor winner. And if BAE is uncertain about this, they might request an opinion from the Taliban. I’m quite certain they will recall who Mr. Meyer is and what he’s capable of!

During my time as a Marine and afterwards, I have had the privilege of knowing a number of Medal of Honor winners. To be sure, they were special. But to the man they put their notoriety aside when possible and continued to serve their communities and their country as good public citizens. Their battlefield heroics never escaped them yet it also never dominated their everyday lives. Their sense of purpose – work, family, country – was as evident in them as it was in those good people around them.

And so it is with Dakota Meyer. His days in uniform are essentially behind him, but his commitment to his country and to the men and women still serving is as strong as ever. That’s why he stood up to his superiors at BAE. He was right in doing it.