Editor’s Note – You know you have really ‘jumped the shark’ when the Huffington Post and NBS report that AG Holder was the one who signed off on the probe into Fox News’ James Rosen and demanded Holder’s head. Is that the fat lady I hear singing? SUA has been demanding Holder’s resignation, impeachment, or arrest for ages, well before Fast and Furious.

Its time to go Mr. Holder – ‘perp walk’ anyone? In a full page posting, the Huffington Post has entered in the largest font we have ever seen the following:

The report places Holder at the center one of the most controversial clashes between the press and the government in recent memory. The warrant he approved named Rosen as a “co-conspirator” in a leak investigation, causing many to warn that the Justice Department was potentially criminalizing journalism. The warrant also approved the tracking of Rosen’s movements in and out of the State Department, as well as his communications with his source, Stephen Kim. 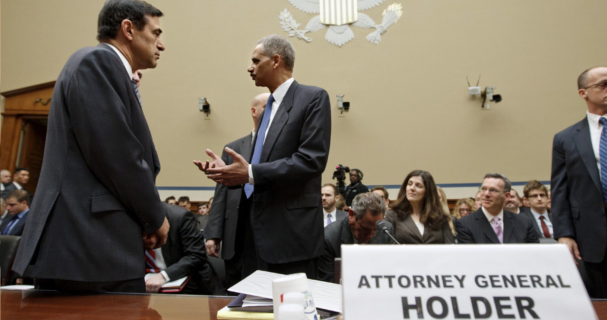 Time to go home Mr. Holder, clean out your desk, security will see you to the door. Then await the subpoenas, here they come!

The Justice Department later said that it did not intend to press any charges against Rosen.

The attorney general is usually required to approve requests to search journalists’ materials, but that rule does not extend to email records.
(Holder recused himself from the investigation into the Associated Press, meaning that he absolved himself of that responsibility.) Holder has previously said that he was not sure how many times he had authorized the search of journalists’ records.

The revelation came hours after President Obama said in a speech that he was concerned about the potential implications of the Fox News and AP investigations. Obama said that Holder would be reviewing the department’s rules for investigations that involve reporters.

“We reject the government’s efforts to criminalize the pursuit of investigative journalism and falsely characterize a Fox News reporter to a Federal judge as a “co-conspirator” in a crime,” Ailes wrote. “I know how concerned you are because so many of you have asked me: why should the government make me afraid to use a work phone or email account to gather news or even call a friend or family member? Well, they shouldn’t have done it.”