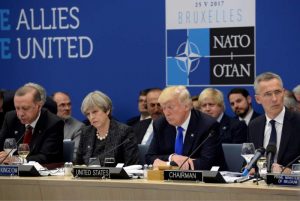 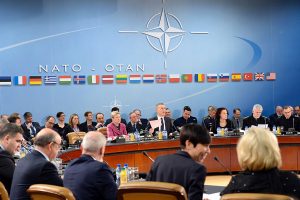 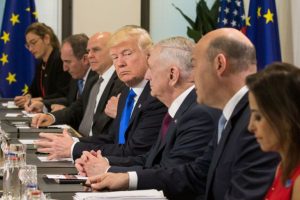 His request for payment is appropriate, although met with scorn and snickers by some European leaders, who seemingly would much rather invest their nations’ valuable resources on matters like climate change than their collective and national defense. The subsequent terrorist attack in London provides another grim reminder of the dangers NATO countries face.

NATO’s purpose is to guarantee the freedom and security of its members through political and military means. The United States, Canada, and several Western European nations created the organization in 1949 to provide collective security against the Soviet Union. It subsequently expanded to 28 member nations and changed its mission after the 1991 Soviet Union collapse.

More than ten years ago all NATO members agreed to spend at least two percent of their gross domestic product (goods and services produced) on defense spending to ensure all of them are at a satisfactory defense readiness level. Currently, only 5 of 28 members are meeting their defense funding commitments. As a result, U.S. taxpayers are shouldering the burden of building up the U.S. military to compensate for other member shortfalls. If NATO is to carry out its mission effectively, each member must invest in its defense at prescribed levels to ensure each can respond to contemporary threats in Europe like Russian aggression and radical Islamic terrorism.

Those threats are very real. In recent years, Putin’s Russia seized parts of the Ukraine and Georgia and is intimidating some other European neighbors as well with its military and hefty nuclear arsenal. And who can forget the recent wanton slaughter of innocent civilians in NATO country urban areas by radical Islamic terrorists such as occurred in Belgium, France, Germany, Turkey, the United Kingdom, and the United States?

How does the NATO funding scheme work? Its most important element is member country readiness, achieved through defense spending of at least 2 percent of each nation’s GDP. The collective GDP for the 28 NATO member nations in 2016 was $38.4 trillion. If all members invested 2 percent of their GDP on defense spending then about $768 billion ($38.4 trillion x 2 percent) would be available for the organization’s common defense.

However, despite repeated attempts by two previous U.S. presidents, Bush and Obama, only a handful of NATO members have met or exceeded their financial defense spending commitments. In fact, as of 2016, only the United States, United Kingdom, Poland, Estonia, and Greece have done so.

The failure of 23 NATO members to meet their defense funding commitments means that those delinquent nations may not be able to meet the minimum manpower, equipment, and support expected of NATO members in the event of a security emergency, which could be devastating for the countries and the alliance. It also means that there is a collective defense funding shortfall of $134 billion among those nations.

How does NATO make up the defense funding shortfall? Like it always does, delinquent member countries rely on the United States to make up the difference. Since the organization’s founding, the United States has served as its chief benefactor. In 2016, the U.S. invested $672 billion in defense spending, $300 billion more than the alliance required, and supplying about 68 percent of NATO’s total resources.

After President Trump’s payment demand, German Chancellor Angela Merkel stated that “we Europeans must really take our fate into our own hands.”  She might instead consider taking some of the other European leaders for a trip down memory lane to fully appreciate the sacrifices in blood and treasure Americans have made for European nations during the 20th Century. Here are a few things for them to consider:

It is largely because of U.S. efforts and American goodwill that Western Europeans survived Germany tyranny during World War I and II and protected Western Europeans, including West Germany, from Soviet Union domination during the Cold War. In addition, it also allowed Chancellor Merkel’s country to eventually overcome its Nazi and communist (East Germany) past and evolve into a free, self-governing unified country that many currently consider Western Europe’s leader.

If Chancellor Merkel and other disenchanted European leaders truly want to take their fate into their own hands, they might want to first consider meeting their NATO defense spending obligations, because it would enhance their own national security as well as the alliance’s – and give Europeans a pathway for their own self-reliance rather than continued U.S. security dependence.  And it would surely please U.S. taxpayers and President Trump if they did.

Fred Gedrich is a foreign policy and national security analyst. He served in the departments of State and Defense.