Editor’s Note – We are all anxiously awaiting the hearing set for Wednesday on Benghazi. SC-Rep., Trey Gowdy has warned us that this going to be very interesting, “explosive”, when interviewed by Fox News:

“There are more Benghazi hearings coming, I think they’re going to be explosive,” Gowdy said on Fox News. “I am bound by certain measures of confidentiality, but I would tell you that you are getting very warm,” Gowdy said when asked by a Fox News anchor during an interview whether witnesses could be coming forward.  When asked about the hearings Gowdy replied they, “are coming sooner rather than later.” (Read more here.)

Additionally, Chairman Issa spoke to a Republican gathering in his district in North County, San Diego about the hearing: 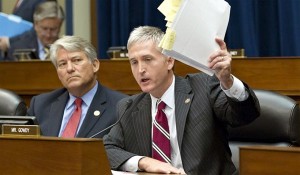 Congressman says hearing Wednesday will reveal that troops were ordered to stand down. Two ex-Navy SEALs died in the September 2012 siege.

A rescue mission to save the U.S. ambassador to Libya and three other Americans was gutted amid the Benghazi siege, a “whistleblower” will testify Wednesday, said the head of the House oversight panel.

Rep. Darrell Issa of North County told Republicans gathered at an awards dinner Friday that the former deputy chief of mission to Libya would be one of several to testify about the Benghazi attack of Sept. 11, 2012.

Media reports identify the diplomat as Gregory Hicks, who was in Tripoli at the time and reportedly took a call from Stevens during the attack. Issa didn’t use Hicks’ name, but did identify the other whistleblower as Mark Thompson, the State Department’s head of counterterrorism.

“He was there for every one of those phone calls—7½ hours in which they begged for help” during the deadly attack, Issa said of Hicks at the annual Lincoln-Reagan Dinner at the Rancho Bernardo Inn.

Two of the victims of the Benghazi attack were former Navy SEALs Tyrone Woods of Imperial Beach and Glen Doherty of Encinitas. They died trying to rescue members of the diplomatic mission as part of a security team contracted through the CIA.

Issa said the whistleblower—who effectively became the acting ambassador when Chris Stevens was killed—“was there for the time in which they launched an internal rescue mission and military personnel were told to get off the plane.”

Issa said the whistleblower will testify that U.S. officials didn’t want troops on the plane because of the admonition “we do not want a military presence.”

“So less good people—less capable of fighting their way in—were on that plane,” Issa told an Aragon Ballroom audience of 640.

Although reports have circulated for days that “whistleblowers” would testify before Congress, none had been named. Nor what they would say.

Conservative media, including Fox News, reported in November that a CIA backup team was ordered to “stand down” and not come to the rescue of the Benghazi consulate, despite pleas for help.

In addition, Thompson will testify that “he never got a call” about the Benghazi attack, Issa said before introducing Luis Fortuño, the Republican governor of Puerto Rico, as featured speaker.

With no doubt in their minds that the attackers were terrorists—instead of a mob enraged over an anti-Islamic video—“they clearly relayed that to the State Department,” Issa said.

But U.N. Ambassador Susan Rice was deployed to the Sunday talk shows instead of Thompson, Issa said, “as part of the normalization that was going on” with Libya.

Issa said Wednesday will be a “very long day,” joking that he would forgo his coffee habit.

He said Friday night that he was flying back to Washington on Saturday to prepare for the hearing Wednesday.

The whistleblowers will say that Rice “clearly had better talking points,” but they were changed for “no security reason, no practical reason.”

Since the leader of Libya was calling the attack terrorism at the time of the Rice TV appearance, “we effectively called the president of the host nation a liar—but that’s what we did on those Sunday shows,” Issa said.

Issa speculated that Jay Carney, President Obama’s press secretary, will call the testimony old news. “Or perhaps former Secretary [of State Hillary] Clinton [will say]: What difference does it make?”

But Issa told the Republican crowd: “We left our people and did not make a proper attempt to rescue them for those 7½ hours,” Issa said. “And as a result, every State Department individual, every person serving overseas, asks the question now: What happens if it’s me, and I’m on my own?”

The Benghazi issue was revived Tuesday when Obama was asked about allegations that his administration is preventing whistleblowers from testifying before Congress about the incident, The Associated Press reported.

“We have to demythologize this issue and certainly depoliticize it. The American people deserve answers. I’m determined that this will be an accountable and open State Department as it has been in the past, and we will continue to do that, and we will provide answers.”

On Tuesday, Issa “complained that he had not received responses to four letters he sent to the administration calling for whistleblowers’ lawyers to get the security clearances needed to represent their clients,” AP said.

State Department spokesman Patrick Ventrell has denied that any employee had been threatened or told to remain silent.

“The State Department would never tolerate or sanction retaliation against whistleblowers on any issue, including this one,” Ventrell was quoted as saying. “That’s an obligation we take very seriously, full stop.”