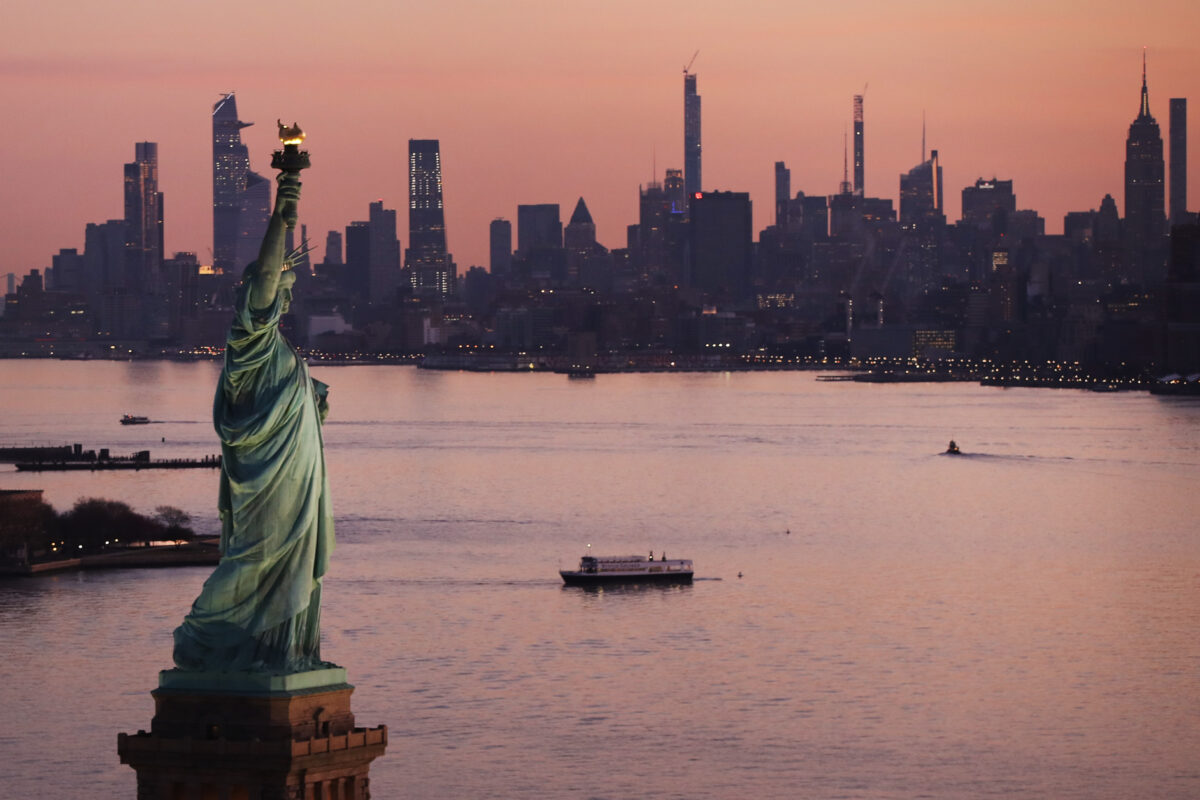 Dawn breaks over The Statue of Liberty with Manhattan in New York City in the background, on March 18, 2020. (Spencer Platt/Getty Images)
VIEWPOINTS

Tragically, New York, the No. l city in the world, has become the epicenter of the COVID-19 pandemic in America. Over the last four decades, New York has also been the city infiltrated the most by the Chinese Communist Party (CCP).

“To conquer the enemies, the first priority is to capture the head,” states a Chinese proverb.

Protect yourself against fake news. Get real news directly to your phone. Download The Epoch Times app here.

To counteract the CCP, the priority is to start cleansing the CCP infiltration from New York. Not only will this greatly help New York recover from the pandemic, but also will set a good model for the rest of the nation, leading the entire nation and the western countries to a recovery. The sooner these actions can be implemented, the sooner the recovery will take place.

On April 16, an article titled, “Comparing New York with Hong Kong, Why Is Hong Kong So Lucky (in this Pandemic)?” was published in the Chinese version of The Epoch Times.

The article states that both New York and Hong Kong are world financial centers. The population in New York is 8.5 million, while Hong Kong is one million less, or 7.5 million. Both cities are tourist centers, attracting almost the same number of tourists, each at a whopping 65 million every year.

Geographically, New York is 7,500 miles from Wuhan, the origin of the pandemic, while Hong Kong is only 570 miles away, 13 times closer. Just about every figure suggests that Hong Kong should have a much higher risk of pandemic outbreak than New York. However, the actual data are exactly the opposite.

The number of deaths in New York is 12,067, compared to only four in Hong Kong; New York is 3,000 times higher. As of April 26, Hong Kong remained still open, while New York had already implemented shelter-in-place for over 4 weeks. What is wrong with New York?

“The Closer to the Chinese Communist Party, the Worse the Pandemic”

On March 11 and April 26, The Epoch Times published two consecutive editorials on the pandemic, disclosing deep, mysterious insights, “The spreading of the virus shows a clear pattern, which is, it is selectively targeting the CCP and is aimed at eliminating the CCP and those who are pro-communist or who have close ties with the CCP.

“All regions that are hard-hit by the virus outside China are those having intimate ties with the CCP, those who have supported the CCP in terms of trade, investment, or helping the CCP improve its international image. Likewise, individuals who have been the CCP’s supporters often find themselves vulnerable to the CCP virus.”(3)

As the world’s No.1 city, New York is the center of the global economy, finance, commerce, and media. It also has great influence on global politics, education, and entertainment. It is the headquarters of the United Nations and other international organizations. Through decades of penetration, these organizations are heavily controlled by the CCP.

The significance of New York City made it the No. 1 target of the CCP’s infiltration. “By infiltrating New York’s economy, finance, commerce, media, culture, education, Chinese-American community and other fields, the CCP has channeled wealth and technology back to China. While exporting its ideology and abuse of human rights to the world, it has attempted to seize world leadership and challenge the United States.”(3)

The April 26 editorial also provided good prescriptions for the pandemic: “Staying away from the CCP, condemning the CCP, not supporting the CCP can help any individual, organization, and country alleviate or even avoid the attacks of the CCP virus. They will then embrace a wonderful future.”(3)

For the Communist China regime to survive, one necessity is wealth—like blood for a human. Sadly, the survival of the CCP is sustained by Wall Street, the American financial capital. Wall Street has played a dominant role in transfusing blood to the CCP for many years. “Wall Street … has become the behind the curtains financier helping the Chinese Communist regime prolong its life.”(3)

“In the past 20 plus years, financial groups on Wall Street have been encouraging Americans to invest in Chinese businesses. Meanwhile, large financial firms underwrite transactions for Chinese firms to purchase or control U.S. companies, real estate, and other businesses. Wall Street was also lobbying policy-makers for decisions that favor China.”(4)

Many securities firms, investment banks, and accounting firms colluded with China to cheat, helping more than a thousand Chinese companies to profit through IPOs.

In addition, JP Morgan established a “Children Project” that hires the children of the CCP elites. This project has become a symbol of close cooperation between Wall Street and the CCP elites.(4)

Wall Street should end the blood transfusion to China and separate itself from the CCP:

1. move the wealth back to America or elsewhere until the CCP collapses

3. stop IPOs of Chinese companies until the CCP collapses

Not only will these actions greatly accelerate the disintegration of the CCP, but also will protect Wall Street itself and New York from the pandemic. Only by ending the collaboration with the CCP could Wall Street welcome a good future.

Times Square is the landmark of New York City. “Since Aug. 1, 2011, Xinhua News has maintained a 24/7 presence on a 60-by-40-foot billboard overlooking Times Square. ‘The sign sits atop flashing ads for Prudential, Coca-Cola and Samsung, making it one of the most visible billboards in the world,’ NPR reported.”(5)

“On May 19, 2011, the CCP’s mouthpiece Xinhua moved its North American headquarters to 1540 Broadway with a 20-year lease. Another mouthpiece, People’s Daily Online, became a tenant of the Empire State Building on July 13, 2011.”(5)

“China Daily has been paying major U.S. newspapers for supplements or inserts, including The Wall Street Journal, The New York Times, The Washington Post, and USA Today. All the inserts are called ‘China Watch,’ and all the contents are from China Daily.”

Taking advantage of freedom of speech, the CCP propaganda has been insidiously spreading the poisonous communist ideology to brainwash the American public.(6) Freedom of Speech is not for the evil to spread its poison.

All forms of CCP propaganda in New York, including billboards at Time Square and around the city, advertorial inserts into American newspapers, and broadcast or publication by CCTV, China Daily, People’s Daily (by Xinhua News Agency), China Global Television Network (CGTN), China Radio International, should end as soon as possible.

“In the name of cultural exchange and collaboration, the CCP has launched Confucius Institutes, donated funds, and instructed Chinese students to steal information and suppress freedom of speech on U.S. campuses. According to the U.S. Department of Education, at least 9 top colleges in the U.S. received funding from China’s tech giant Huawei in the past 6 years, including Massachusetts Institute of Technology, Princeton University, University of California at Berkeley, and Cornell.”(5)

The infiltration into American universities and colleges is an important part of China’s overseas propaganda setup. Hence,

1. All universities and colleges must stop accepting donations from any Chinese companies or Chinese organizations.

2. All professors and intellectuals must stop collaborating with Chinese universities/institutes/companies.

3. All Confucius Institutes must be immediately shut down.

4. The CCP agents on campus must be dismissed.

“Chinatown communities in Manhattan and Flushing, New York have been controlled by the CCP for decades. For example, the Northeast Chinese Community Federation (unofficial translation of its Chinese name) is one of three CPPRC (Council for the Promotion of the Peaceful Reunification of China) organizations established in New York.”(5)

The Association for the Promotion of Peaceful Reunification of China (APPRC) has about 200 branches worldwide. All of them are strong advocates for the Chinese regime. “Experts say the organization’s goal is to advance China’s interests and silence criticism of the emerging superpower. In fact, these associations affiliated with the Chinese Communist Party often disguise themselves as ordinary NGOs.”(5)

Another example is Ms. Li Huahong. The leader of a local communist front group in Flushing, NY called the Chinese Anti-Cult World Alliance, Li has been organizing brutal assaults on Falun Gong practitioners since as early as 2008.

All these NGOs affiliated with the CCP must be disbanded with the key leaders investigated.

End Sister-City Relation With Beijing, the Capital of Communist China

New York City should end these sister-city relationships with the CCP, especially the one with Beijing, to prevent the city from being exploited.

Paul E. Vallely, MG US Army (Ret), is chairman of Stand Up America USA. His latest book is “Operation Sucker Punch: Blood for Our Future.” He is the co-author of “Endgame: The Blueprint for Victory in the War on Terror.”

This article is released by Stand Up America US Foundation and is part of its Operation Nemesis 2.0, Retribution Against the Chinese Communist Party (CCP).

Views expressed in this article are the opinions of the author and do not necessarily reflect the views of The Epoch Times.