Editor’s Note – Say thanks to the “Arab Spring” and that pesky ‘democracy’ word so bandied about last year when the Egyptian people ousted Hosni Mubarak. As SUA warned, once the big bad Mubarak was gone, the Islamists would fill the void and that is what they did. Now, the Obama Administration is warming up to the Muslim Brotherhood…yes that brotherhood of haters of the west created in 1928, the Nazi sympathizers, creators of Hamas, and the avowed Shariya Law purveyors.

In less than three years, we have had our foreign policy turned on its ear. Now we are having talks with the Taliban, cozying up to the Muslim Brotherhood, bowing to Islamic kings and princes, and getting kicked out of Iraq…and those are just a few examples! Obama is making Neville Chamberlin and Jimmy Carter look like war hawks. What next…cede Alaska back to Russia?

At the risk of being redundant, SUA reminds its readers, in Islam, you get a democratic vote, ONCE! Just ask the Iranian people.

From the NY Times

With the Muslim Brotherhood pulling within reach of an outright majority in Egypt’s new Parliament, the Obama administration has begun to reverse decades of mistrust and hostility as it seeks to forge closer ties with an organization once viewed as irreconcilably opposed to United States interests.

The administration’s overtures — including high-level meetings in recent weeks — constitute a historic shift in a foreign policy held by successive American administrations that steadfastly supported the autocratic government of President Hosni Mubarak in part out of concern for the Brotherhood’s Islamist ideology and historic ties to militants. 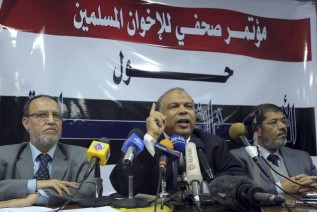 The shift is, on one level, an acknowledgment of the new political reality here, and indeed around the region, as Islamist groups come to power. Having won nearly half the seats contested in the first two rounds of the country’s legislative elections, the Brotherhood on Tuesday entered the third and final round with a chance to extend its lead to a clear majority as the vote moved into districts long considered strongholds.

The reversal also reflects the administration’s growing acceptance of the Brotherhood’s repeated assurances that its lawmakers want to build a modern democracy that will respect individual freedoms, free markets and international commitments, including Egypt’s treaty with Israel.

And at the same time it underscores Washington’s increasing frustration with Egypt’s military rulers, who have sought to carve out permanent political powers for themselves and used deadly force against protesters seeking an end to their rule.

The administration, however, has also sought to preserve its deep ties to the military rulers, who have held themselves up as potential guardians of their state’s secular character. The administration has never explicitly threatened to take away the $1.3 billion a year in American military aid to Egypt, though new Congressional restrictions could force cuts.

Nevertheless, as the Brotherhood moves toward an expected showdown with the military this month over who should control the interim government — the newly elected Parliament or the ruling military council — the administration’s public outreach to the Brotherhood could give the Islamic movement in Egypt important support. It could also confer greater international legitimacy on the Brotherhood.

It would be “totally impractical” not to engage with the Brotherhood “because of U.S. security and regional interests in Egypt,” a senior administration official involved in shaping the new policy said, speaking on the condition of anonymity to discuss diplomatic affairs.

“There doesn’t seem to me to be any other way to do it, except to engage with the party that won the election,” the official said, adding, “They’ve been very specific about conveying a moderate message — on regional security and domestic issues, and economic issues, as well.”

Some close to the administration have even called this emerging American relationship with the Brotherhood a first step toward a pattern that could take shape with the Islamist parties’ coming to power around the region in the aftermath of the uprisings of the Arab Spring. Islamists have taken important roles in Morocco, Libya, Tunisia and Egypt in less than a year.

“You’re certainly going to have to figure out how to deal with democratic governments that don’t espouse every policy or value you have,” said Senator John Kerry, the Massachusetts Democrat who is chairman of the Foreign Relations Committee and recently joined with the ambassador to Egypt, Anne W. Patterson, for a meeting with top leaders of the Brotherhood’s political party.

He compared the Obama administration’s outreach to President Ronald Reagan’s arms negotiations with the Soviet Union. “The United States needs to deal with the new reality,” Mr. Kerry said. “And it needs to step up its game.”

“They certainly expressed a direction that shouldn’t be a challenge to us, provided they follow through,” he said, adding, “Obviously the proof will be in the pudding.”

Brotherhood leaders, for their part, often talk publicly here of their eagerness for Egypt to have cooperative relations “as equals” with the United States. The Brotherhood renounced violence as a political tool around the time the 1952 revolution overthrew the British-backed monarchy. Over the years, many of its leaders said they had become comfortable with multiparty electoral democracy while serving as members of a tolerated — if marginalized — parliamentary minority under Mr. Mubarak.

They also seem to revel in their new standing. After the meeting with Senator Kerry and Ambassador Patterson, the Brotherhood’s newspaper and Web site reported that Mr. Kerry said “he was not surprised at the progress and leading position of the Freedom and Justice Party on the electoral landscape in Egypt, emphasizing his respect for the public will in Egypt.”

“Egypt is a big country with a long honorable history and plays an important role in Arab, Islamic and international issues, and therefore respects the conventions and treaties that were signed,” the Brotherhood leaders said they told Mr. Kerry.

But, on the group’s English language Web page, the report also urged the United States “to hear the peoples, not to hear of them,” and advised “that America could play a role in the economic development and stability of various peoples of the world, if it wished.”

On Tuesday, the administration intensified its criticism of Egypt’s military rulers over raids that last week shut down 10 civil society groups, including at least 3 American-financed democracy-building groups, as part of an investigation of illicit foreign financing that has been laden with conspiratorial and anti-American rhetoric.

“It is, frankly, unacceptable to us that that situation has not been returned to normal,” a State Department spokeswoman, Victoria Nuland, said, charging that Egypt’s military rulers had broken pledges last week to top American officials, including Defense Secretary Leon E. Panetta.

She called the officials behind the campaign against the organizations “old Mubarak holdover types who clearly are not on the new page with the Egyptian people.”

The administration’s willingness to engage with the Brotherhood could open President Obama to new attacks by Republicans who are already accusing him letting Islamists take over a pivotal ally. Some analysts, though, said the overtures amounted to a tacit admission that the United States should have begun such outreach to the region’s Islamist opposition long ago.

Discreet American contacts with the Muslim Brotherhood go back to the early 1990s, although they were previously limited to unpublicized meetings with members of Parliament who also belonged to the Brotherhood but were elected as independents. And even those timid encounters evoked vitriol from Mr. Mubarak.

“Your government is in contact with these terrorists from the Muslim Brotherhood,” he reportedly told the American journalist Mary Anne Weaver in 1994. “Very secretly, without our knowledge at first,” he said, adding, “I can assure you these groups will never take over this country.”

Shadi Hamid, director of research at the Brookings Doha Center in Qatar, argued that the United States missed chances to build ties to moderate Islamists earlier. When Mr. Mubarak jailed thousands of prominent Brotherhood members in 2005 and 2006, for example, the organization reached out to Washington.

“Now the Brotherhood knows it is in a stronger position and it is almost as if the U.S. is chasing them and they are sitting pretty,” Mr. Hamid said. “But what can the U.S. do, intervene and change the election results?” he asked. “The only alternative is to be against democracy in the region.”

Egypt’s elections are expected to continue to Wednesday, with runoffs next week, and Parliament’s first session is expected to open Jan. 23, two days before the anniversary of the protests that forced out Mr. Mubarak.