Cuccinelli – 1775, the Root of Today's Celebrations

Editor’s Note -On this 238th anniversary of the signing of the Declaration of Independence, and at a time when our nation has become so polarized, we take a moment to remember that which unites us. Ken Cuccinelli, the former Attorney General for Virginia reminds us of how quickly the tide can change, especially when declaring our independence.

Cuccinelli, now the new President of the Senate Conservatives Fund reminds us that the seeds of revolution were sown buy but a few. In 1775, only four colonies were advancing to that fateful time soon to come, but by year’s end, many others came to notice. 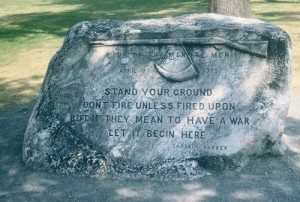 On Lexington Green, the immortal words of Militia Captain John Parker are forever etched into this monument to April 19, 1775, the day our revolution began.

He reminds us also to think about who we really are:

“America isn’t a place, and Americans aren’t a tribe, we are a people brought together by our mutual commitment to shared principles. Such a basis for a nation was utterly unique in the history of the world in 1776, and it is a special gift to which each of us are heirs.”

By Ken Cuccinelli from Sword at the Ready

As we celebrate the birthday of our exceptional nation, I wanted to look back just one more year than Americans usually do today – back to 1775.

Of course, the Revolutionary War began in 1775, not 1776. Before we were ready to take the historic and dramatic step of birthing our own new nation in liberty, there were long and often painful attempts to accommodate the relationship between American colonists and the British Parliament and King.

Interestingly, one of the evolutions that happened during that year is that many Americans who started 1775 thinking of themselves as “British” did not finish the year that way. I hear from many Republicans who are having similar feelings this year. One year is a short time for such a change, and it was almost entirely driven by the British themselves. As much as some colonists, especially in Virginia, Massachusetts, South Carolina and Connecticut, were advancing toward independence in 1775, most colonists were not there when the year began.

What are some of the things the British did in 1775 to drive their subjects to rebel, you ask? There were many, and you may notice how history tends to repeat itself…

First, as the possibility of armed conflict increased from 1774 into 1775, the four leading states started removing stocks of gunpowder out of reach of Royal Governors, and they commissioned buyers around the world to buy more gunpowder and weapons for their colonial militias. Needless to say, the colonial bodies undertaking these steps weren’t approved or allowed by the Crown, nonetheless, they pressed on – at great personal risk.

The British did all they could, especially the Royal Navy, to interdict these shipments.

So, my fellow 2nd Amendment supporters will not fail to notice that one of the first “battles” of the American Revolution was for the citizenry to arm itself adequately to protect its own rights against the government itself. It is also no surprise that the first true battle of the Revolutionary War was sparked by a British effort to seize gunpowder stored at Concord, Massachusetts. On their way to Concord, the shot heard round the world was fired at Lexington, Massachusetts and the shooting war was on.

Second, it is very important to note that even after the battles at Lexington and Concord on April 19, 1775, many colonists, especially in New York, New Jersey, Pennsylvania, Delaware, and Maryland – the so-called “middle colonies” were not enthusiastic to press the colonial case so aggressively. They generally preferred continuing to try to talk through colonial difficulties with the Crown and Parliament, without any pushing, threatening and certainly not attacking the British.

But the British Navy began what may literally be called the naval version of ‘scorched earth’ tactics in 1775. They started threatening, attacking and burning colonial seaside towns! Can you imagine? Their notion seems to have been to bully the colonists back into line.

The Royal Navy threatened Weymouth, Marblehead and Gloucester in Massachusetts. But the first town burned was Charlestown, Massachusetts. The Royal Navy fired red-hot cannonballs to start the fire, and later that day landed nearby to begin the fight we now know as Bunker Hill.

Next door in Rhode Island, Royal Navy Captain James Wallace had been threatening Newport for months. He threatened to burn or fire on their town if they didn’t provide supplies, or if they interfered with his men, or if they allowed Patriot troops into town, and on and on.

At that time, about half of Rhode Island’s population lived on the coast or islands along the coast, so they were very vulnerable to Wallace’s threats. Then he began cannonading Newport in the summer of 1775 and regularly thereafter. By the turn of the year, three quarters of the previous inhabitants had been driven from their homes.

Wallace’s flotilla bombarded Connecticut towns too, and stole their hay and livestock.

It should be no surprise that during the summer of 1775, both colonies were among the first to call for a colonial navy, and in fact, began fitting out their own navies!

The 64-gun line-of-battle ship Asia fired a full broad side into lower Manhattan near Wall Street! This led – as intended – to great fear among those in New York City, and within weeks, many began to leave rather than live under the threat of the Asia’s guns. By the end of the year, about half of the residents had left the city.

You can picture in your mind the trail of carts and wagons and families as refugees. Such treatment, or even just seeing the sad plight of fellow colonists, would have affected people strongly.

In Virginia, British Captain Montagu threatened to burn York – soon to become known as Yorktown. And the Royal Governor himself – Lord Dunmore – threatened to burn Williamsburg! Hampton Roads was fired upon and so was Jamestown – the original English foothold in America.

There was a small naval battle in Charleston Harbor, in South Carolina, in November of 1775, as patriots there tried to sink ships in the channel to protect their town from the kinds of bombardments and burnings that were taking place in New England.

Starting in October, the British issued orders to their Navy Captains to go to specific towns, e.g., Gloucester, Massachusetts to “burn, destroy and lay waste the said Town together with all Vessells and Craft in the Harbour.” They also began systematic bombardments of seacoast towns.

The most infamous town burning of them all was of Falmouth, Massachusetts in October of 1775. It was done as revenge for Falmouth’s resistance to the Royal Navy in May of 1775. After some threatening back-and-forth with the local leaders, the British Navy spent an entire day bombarding the town, and then went ashore to burn it. 130 homes were burned, along with the new courthouse, the fire station and the public library. It was an instant flashpoint across the colonies.

Then, near and dear to my heart, on New Year’s Day of 1776, Norfolk, Virginia was bombarded and burned. Ironically, it was a center of Tory sentiment.

Of course, such tactics drove undecideds to the Patriot cause and embarrassed (some) Tories. Other Tories thought even stronger measures were in order. You can imagine the Patriot response to such Tory neighbors!

The third tactic used by the British that so pushed colonists toward the independence that we celebrate today was the hiring of Hessian troops to suppress the colonists. This was seen as unleashing demons of war. The Hessians were known to take some of their pay in plunder, and it was a sign to the colonists that the British intended to treat them as “savages” and not “brothers.”

1775 was a lonely year to be a Patriot in many parts of America.

Why did they suffer such depredations and keep going? In their minds it came down to one word: Liberty.

They believed in their cause and they were willing to sacrifice everything to obtain liberty in America. At that time they didn’t know whether it would be by protecting their rights as Englishmen, or striking out alone as Americans – with the prospect of having to overcome the greatest military power in the world at that time – an imposing thought!

There is much to celebrate as we think back to 1776. The Founders of this nation were bold visionaries who stepped out on a path that had never been tried before in the history of the world. They lit a lamp for the world, and they knew the risks and confronted them boldly, closing the Declaration by saying: “with a firm reliance on the protection of divine Providence, we mutually pledge to each other our Lives, our Fortunes and our sacred Honor.”

America isn’t a place, and Americans aren’t a tribe, we are a people brought together by our mutual commitment to shared principles. Such a basis for a nation was utterly unique in the history of the world in 1776, and it is a special gift to which each of us are heirs.

We are truly blessed to be Americans.

Here at the Senate Conservatives Fund, we – you – back candidates that proudly carry forward the principles of the Founding Fathers against the odds and regardless of the tactics used against them. We believe that the gift we have received of America comes with a moral responsibility to preserve her, and we don’t just mean the territory of America, we mean her principled foundation.

Everything we do at SCF is to carry forward the Founders’ vision in the 21st century. The principles that built this exceptional nation are universal and timeless. That means they apply everywhere, and all the time. No exceptions.

We back candidates that share our commitment to the first principles of this country, and we ask you to sacrifice your property – your money – so that our candidates can have the gunpowder they need to fight back.

None of us – not me, not you, not our candidates – is being asked to put their head in a noose to advance the cause of life, liberty and the opportunity to pursue happiness, as the 56 signatories to the Declaration of Independence did. However, their cause must be our cause, and we need to remember that whatever our sacrifice from our “fortunes” – to use the same word the Founders used – none of us has any excuse to let up or to let long odds bring us down.

Did you know that George Washington had three wins and six losses in major battles in the Revolutionary War? He lost more battles, but he won the war.

And can you name five people who were at Valley Forge? How about three? How about two? We may not know who they were, but the whole world knows what they did! And their successors in uniform around the world continue to deserve our gratitude and respect today!

It took many unnamed heroes to make America, and it will take many more unseen heroes to return America to her foundational principles. That’s where you come in, though you may not have even realized your role.

On this day that we set aside to celebrate America and what she stands for, let me Thank You for carrying on the legacy of Valley Forge and sacrificing to put America back on a principled path of greatness once again.