Contempt vote on, talks fail, some Dems to vote yea

Editor’s Note – Today, the table is set, tomorrow is the big vote. Last minute talks with the White House have failed and we also learned that many Democrats are planning to vote FOR contempt. That is a sign of two things; one, Obama has no coat tails to help congressmen to get re-elected, and two, Holder and the White House are guilty as sin.

Thursday is going to be a busy news day – contempt vote, and the SCOTUS decision on Obama Care – we hope neither is over-shadowed by the other. Stay tuned.

Boehner: House will go ahead with contempt vote

WASHINGTON (AP) — Speaker John Boehner (BAY’-nur) says the House will move forward with a contempt of Congress vote against Attorney General Eric Holder over the botched gun-tracking operation known as Fast and Furious.

The Ohio Republican told reporters Wednesday that last-minute talks with the White House about releasing documents had failed to avert the vote. President Barack Obama has asserted executive privilege to keep the documents secret, but Republicans say there’s no basis for that.

The issue has political implications this election year. The National Rifle Association is keeping score, prompting some Democrats to join Republicans in voting for contempt. Such a citation would not cause the release of more documents on the operation, in which guns were allowed to “walk” from Arizona to Mexico in hopes they could be tracked.

Hoyer: Some Dems Will Vote To Hold Holder In Contempt For Fast And Furious

WASHINGTON (AP) — Now that the politically potent National Rifle Association is keeping score, some Democrats may join House Republicans if there’s a vote to hold Attorney General Eric Holder in contempt of Congress in a dispute over documents related to a botched gun-tracking operation. 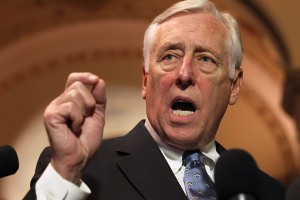 The chief Democratic House head counter, Rep. Steny Hoyer of Maryland, declined to tell reporters how many defections he expected, but acknowledged that some in his party would consider heeding the NRA’s call for a “yes” vote.

The gun owners association injected itself last week into the stalemate over Justice Department documents demanded by the House Oversight and Government Reform Committee. The NRA said it supports the contempt resolution and will keep a record of how members vote.

An NRA letter to House members contended that the Obama administration “actively sought information” from Operation Fast and Furious to support its program to require dealers to report multiple rifle sales.

Republicans want Eric Holder to become the first attorney general to be cited by the House for contempt, because he has refused to give the Oversight and Government Reform Committee all the documents it wants related to Operation Fast and Furious.

Unless a last-minute deal is worked out, always a possibility in Congress, the contempt vote is scheduled for Thursday — the same day the Supreme Court is to announce its ruling on the legality of the nation’s health care law.

A vote to hold Holder in contempt of Congress wouldn’t send any documents to the Oversight committee and its chairman, Republican Rep. Darrell of California. President Barack Obama has claimed executive privilege, a legal step that presidents have used to maintain secrecy of internal administration documents.

Obama invoked what is known as “deliberative process privilege,” a claim designed to broadly cover executive branch documents. However Issa, in a letter to the president, said Obama was misusing the narrower “presidential communications privilege,” which is reserved for documents to and from the president and his most senior advisers.

White House Spokesman Eric Schultz said Tuesday that Issa’s analysis “has as much merit as his absurd contention that Operation Fast and Furious was created in order to promote gun control. Our position is consistent with executive branch legal precedent for the past three decades spanning administrations of both parties.”

Ironically, the documents at the heart of the current argument are not directly related to the workings of Operation Fast and Furious, which allowed guns to “walk” from Arizona to Mexico in hopes they could be tracked. The department has given Issa 7,600 documents on the operation.

Rather, Issa wants internal communications from February 2011, when the administration denied knowledge of gun-walking, to the end of that year, when officials acknowledged the denial was erroneous. Those documents covered a period after Fast and Furious had been shut down.

In Fast and Furious, agents of the federal Bureau of Alcohol, Tobacco, Firearms and Explosives in Arizona abandoned the agency’s usual practice of intercepting all weapons they believed to be illicitly purchased. Instead, the goal of gun-walking was to track such weapons to high-level arms traffickers who long had eluded prosecution and to dismantle their networks.

Gun-walking long has been barred by Justice Department policy, but federal agents in Arizona experimented with it in at least two investigations during the George W. Bush administration before Fast and Furious. These experiments came as the department was under widespread criticism that the old policy of arresting every suspected low-level “straw purchaser” was still allowing tens of thousands of guns to reach Mexico. A straw purchaser is an illicit buyer of guns for others.

The agents in Arizona lost track of several hundred weapons in Operation Fast and Furious. The low point of the operation came in Arizona in 2010, when U.S. Border Patrol Agent Brian Terry was killed in a firefight with a group of armed Mexican bandits and two guns traced to the operation were found at the scene.

Issa, in his letter to the president, wrote, “Courts have consistently held that the assertion of the constitutionally-based executive privilege … is only applicable … to documents and communications that implicate the confidentiality of the president’s decision-making process.”

The letter said that while the privilege covers only the president and his advisers, it is a qualified privilege that can be overcome by a showing of the committee’s need for the documents.

Issa quoted from a 1997 case in the U.S. Court of Appeals for the District of Columbia Circuit in which the court said the privilege should not extend to staff outside the White House in executive branch agencies.

Rather, the court said, it should apply only to “communications authored or solicited and received by those members of an immediate White House adviser’s staff” with responsibility for formulating advice for the president.