Editor’s Note – Associations often identify key characteristics of all peoples. Who you chose to dine with, have a chat with over a beer, bowl with on Saturday nights, sit next to in church, or whose home you chose to launch your political campaign from tell volumes of who you are.

Therefore, is it not important to know who Mitt Romney worked with closely at Bain Capital, or to whom Newt Gingrich was an adviser (Fannie Mae, Freddie Mac), or who Herman Cain gave a ride to and from an event (Accusations of sexual advances)? Of course it is important, and the media has been diligent in showing us these associations, good, bad, or indifferent, but usually just the bad. Heck, Dan Rather even made up erroneous documents to show the character of George W. Bush. What about Bachman’s migraines, or the emails obtained through FOIA requests that went no where regarding Gov. Palin, or the fact that Rick Perry once supported Al Gore?

Why then are these associations so important now, so important that now Herman Cain is no longer a candidate for the RNC nomination to run against Obama in 2012? We all know that it was NOT important concerning Obama though. Why? Once again, the subject has resurfaced and the following article, ardently compiled from well documented research, shows us EXACTLY who Obama is, still is, and always shall be:

By Malcolm A. Kline

Truly the major media have only scratched the surface, when they have even felt the itch, of the influence of radical left-wing groups in academia. Moreover, these are not “all we are saying is give peace a chance” types.

The Students for a Democratic Society (SDS) have a history of demonstrations that were, well, demonstrative, as did their even more violent spinoff, the Weathermen. That’s what brought both to the attention of the FBI and made them an enduring object of fascination for law enforcement officials. 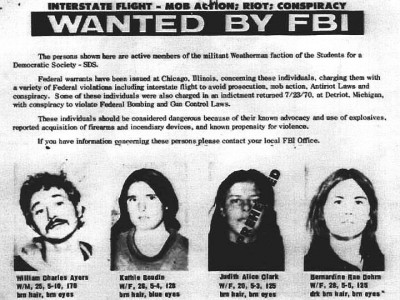 “The fingerprints of [Mark] Rudd, [Bernardine] Dohrn, [Howard] Machtinger and [Billy] Ayers were found at the scene of the Weather Underground ‘Pine Street Bomb Factory’ in March of 1971, according to declassified FBI documents,” Accuracy in Academia staff writer Bethany Stotts has reported.

Yet and still, it is not just the ethos of these organizations that passed into the faculty lounge but the original members themselves. Accuracy in Academia has found that one-quarter of the membership in the national council of the SDS has either worked in academia, guest lectured there or written textbooks.

Take, for example, Cathlyn P. Wilkerson, who became a high school math teacher. “In her book, Wilkerson is apologetic for Weatherman’s tactics, but not for her radical politics: She is still a radical, but one who prizes the right to vote, which she regained several years ago,” National Public Radio reported in 2007. “As for her Weatherman years, Wilkerson describes a time when optimism turned to fear and anger — and when she surrendered curiosity to the need to know and independent thinking to orders from the top.”

“I was a leader in the UCLA chapter of SDS in the late 1960s but never on the national council,” Michael Balter told us. “I was a member before the national organization splintered into several factions.”

“Looking back, I think that SDS’s opposition to the war in Vietnam and to racism in the United States was absolutely correct, and that its methods of militant campus protest were justified by the circumstances of the time.”

“I did not approve of the splinter group Weatherman and its bombing campaigns, however.”

The most famous alumni of both SDS and the Weathermen are probably the husband and wife team of Bill Ayers and his wife Bernardine Dohrn but they are not the only tenured radicals in the bunch. They are not the only married couple to emerge from the SDS either. (By the way, in addition to their many other accomplishments, Ayers and Dohrn have edited a little volume called Zero Tolerance: resisting the drive for punishment in our schools.)

Michael Klonsky, general secretary of the SDS married Sue Eanet, a writer at New Left Notes, the SDS publication. Klonsky, an advisor to the Obama campaign in 2008, heads the Small Schools Workshop, conveniently based in Chicago, which, like Ayers’ outfit, benefited from the largesse of the community organization Barack Obama served. Klonsky’s brother Fred, also a graduate of SDS, is a public school teacher in Wisconsin.

(Incidentally, another SDS national council member, Jeff Jones, belongs to the same Apollo Alliance that begat another Jones—Van, no relation—who served in, then exited, the Obama Administration.)

Fellow SDSer Mark Rudd remembers that he and his buds had sharp political disagreements with Michael Klonsky. Rudd and company were Maoists while Klonsky was a Stalinist.

In other words, Rudd and his compatriots felt more of a kinship with Mao Tse Tung who ruled Communist China for nearly 30 years and killed 60 million people while Klonsky found himself more simpatico with Josef Stalin, master of the Soviet Union, who lorded over the U. S. S. R. while 40 million people perished under his policies.

In a category all his own is Michael Golash. “The Columbia strike changed my life for the good,” he blogged. “I meet [sic] my wife and developed a revolutionary outlook.”

“I came to understand that imperialism with its racist and sexist practices had to be destroyed, not reformed, and replaced with a communist society. Forty years ago I thought the process would move along a little quicker than it has.”

Golash went to work for the Washington, D. C. metrorail system but his wife landed some influential jobs.

“In the early nineties, Deirdre got a job teaching at American University,” Golash writes.”

“Today she is the chair of the Law, Justice and Society Department at AU. She also wrote a philosophy book called The Case Against Punishment.”

“I am still working at Metro.”

What follows is a list of SDS alumni who went on to work in education or wrote textbooks. The asterisks denote those still in academia or active in education:

19. Carol McEldowney—RIP, contributor, Our Bodies, Ourselves

Malcolm A. Kline is the Executive Director of Accuracy in Academia.