Bill To Get U.S. Out Of UN Introduced in House

Editor’s Note – The United States is responsible for almost one quarter of the U.N.’s funding and taxpayers have the pleasure of supporting some of our biggest enemies, and those of our allies, most especially Israel.

The “Dictators Club” is rife with rip-offs, fraud, and scandals that reach back decades, yet we furnish the location as well.

We could not agree more with Rep. Mike Rogers, R-AL for filing legislation to leave the UN and in our opinion, move the entire operation to some place in West Africa where Ebola is rife. 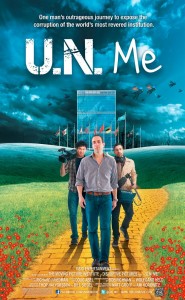 How about a stellar member of the “Community of Nations” like Zimbabwe where scandal is the common sport of people like Robert Mugabe. Remember the “Oil for Food” program/scandal for Iraq under Saddam Hussein and former Secretary General Boutros Boutros Ghali?

How about those sexual abuse scandals, or the perennial money abyss of UNRWA in Gaza, and its complicity with Hamas?

Then there are all those commissions, like the human rights scandals and the hypocritical way Israel is always targeted and how the UN always works against American interests and rights!

It is worthy to once again view the movie “U.N. Me” by Ami Horowitz.

The movie exposes many of the scandals and is a MUST SEE if you have not seen it yet. After you review it, call your Congressman to support Rep. Rogers’ bill.

The list goes on and on, ship it out!

Congressman Mike Rogers Introduces Bill to Get U.S. Out of UN

By Alex Newman – The New American

Citing wasted tax dollars and attacks on the constitutionally guaranteed liberties of the American people, Rep. Mike Rogers (R-Ala.) introduced a bill to restore U.S. sovereignty and withdraw from the United Nations.

The effort to de-fund and exit the UN comes amid growing scrutiny of the global organization, often ridiculed as the “dictators club,” and myriad mega-scandals swirling around it.

However, despite ever-growing support in Congress for restoring U.S. sovereignty by withdrawing from the UN over the years, the legislation still faces an uphill battle.

In a statement last week announcing the American Sovereignty Restoration Act of 2015 (H.R. 1205), Rep. Rogers noted that many of his constituents in East Alabama would likely agree with his position that U.S. government participation in the UN should end immediately.

“The U.N. continues to prove it’s an inefficient bureaucracy and a complete waste of American tax dollars,” the congressman said, echoing widespread concerns about the international outfit expressed across America and worldwide.

“Why should the American taxpayer bankroll an international organization that works against America’s interests around the world?” asked Rep. Rogers. “The time is now to restore and protect American sovereignty and get out of the United Nations.” He cited attacks on U.S. liberties as a key motivation for the legislation.

A previous bill to withdraw from the UN introduced in the last Congress by then-Rep. Paul Broun (R-Ga.) garnered nine co-sponsors. With the regime ruling Communist China increasingly taking a leading role at the UN, among numerous other concerns, opposition to the global body is expected to continue growing.

If approved, the legislation would repeal the UN Participation Act of 1945 and shutter the U.S. government’s mission to the outfit. It would also “terminate all membership by the United States in the United Nations, and in any organ, specialized agency, commission, or other formally affiliated body of the United Nations.”

That specifically includes UNESCO, which President Ronald Reagan withdrew from, along with the World Health Organization, the UN Environment Program (UNEP), and more. It would end all U.S. involvement in all UN conventions and agreements, too.

The proposed law, introduced in numerous legislative session of Congress in recent decades, would also end all funding to the UN and all of its agencies — with the estimated savings to taxpayers reaching into the billions per year, and potentially even more.

The legislation also aims to end all U.S. military involvement in UN military “peacekeeping” schemes and ban U.S. troops from serving under UN command. Finally, the bill would seek to evict the UN and its dictator-infested headquarters from U.S. soil.

It would also ban any use of American government facilities by the global outfit, while stripping UN bureaucrats and dignitaries of diplomatic immunity.

Rep. Rogers pointed to a wide range of reasons why the U.S. should dump the UN. “Although the United States makes up almost a quarter of the U.N.’s annual budget, the U.N. has attempted a number of actions that attack our rights as U.S. citizens,” he explained.

“To name a few, these initiatives include actions like the Law of the Sea Treaty, which would subject our country to internationally-based environmental mandates, costing American businesses more money, or the U.N.’s work to re-establish an international regulation regime on global warming which would heavily target our fossil fuels.”

Indeed, especially in recent years, the UN has become increasingly brazen in attacking the rights of Americans, and even the U.S. Constitution that enshrines those unalienable rights.

From attacks on free speech and gun rights to assaults on America’s federalist system of government and states’ rights, the UN and its member regimes have become increasingly aggressive.

Now, the UN is working on a series of major schemes that would undermine even the principles upon which the United States was founded, much of it under the guise of promoting pseudo-human rights and pseudo-environmentalism.

Rep. Rogers took special aim at a UN gun treaty that has become a lightning rod for bipartisan opposition across America.

“The U.N. has also offered a potential Arms Trade Treaty which would threaten our Second Amendment rights and impose regulations on our gun manufacturers, who are already facing regulations and pressure from the Obama Administration,” Rogers explained.

That treaty, ATT for short, would purport to require gun registration and eventually strict controls, with the ultimate aim of disarming civilians.

The UN’s perceived anti-Israel bias, which some critics have even dubbed systemic anti-Semitism, also attracted criticism from Rep. Rogers. “Lastly, the U.N. does not support Israel and voted to grant the Palestinian Authority ‘non-member state’ permanent observer status,” he argued.

“Anyone who is not a friend to our ally Israel, is not a friend to the United States.” Even some globalist neo-con senators such as Lindsey Graham (R-S.C.) have threatened the UN over its apparent hostility to Israel, and the outrage continues to grow.

For the reasons cited above, “among others,” Rep. Rogers said, he introduced the American Sovereignty Restoration Act. By introducing the bill in this session, the congressman from Alabama continues the long and valiant effort by lawmakers to get the U.S. government out of the UN.

Former Rep. Ron Paul (R-Texas), a GOP presidential candidate last election and a hero of many liberty-minded and constitutionalist Americans, first introduced the bill in 1997, when it garnered 54 supporters. The next time it was voted on, support had drastically increased.

While anti-UN sentiment is fierce and growing across much of America, in Alabama, where the legislation’s lead sponsor comes from, that animosity is especially pronounced.

In 2012, for example, both houses of the state legislature voted unanimously to ban the deeply controversial UN “sustainable development” program known as Agenda 21 in what was hailed as a major victory for property rights and sovereignty.

Since then, UN meddling in American affairs has accelerated dramatically, sparking even more outrage about the global organization across Alabama and beyond.

In the U.S. Senate, pro-sovereignty sentiment is also growing. Earlier this year, Sen. Rand Paul (R-Ky.), a leading contender for the 2016 nomination, blasted the UN and suggested it should be dismantled.

“I dislike paying for something that two-bit Third World countries with no freedom attack us and complain about the United States,” explained the senator, who is also Ron Paul’s son. “There’s a lot of reasons why I don’t like the UN, and I think I’d be happy to dissolve it.”

The American public generally shares those sentiments, with a 2014 Gallup poll showing that a staggering 57 percent of Americans believed the UN was doing a “bad job,” versus 37 percent who thought it was doing a “good job.”

More than two thirds of Americans were upset with the UN, and independents were also overwhelmingly opposed. But even among Democrats, half thought the UN was doing a bad job.

The Obama administration, meanwhile, apparently out of step with the American people, has called for drastically expanding and empowering the UN and its scandal-plagued military forces.

The legislation to withdraw U.S. participation in the UN is currently sitting in the House Foreign Affairs Committee chaired by Rep. Edward “Ed” Royce (R-Calif.), who will play a key role in deciding whether it moves on to the full House for a vote by the American people’s elected representatives.

Americans who support U.S. sovereignty and the U.S. Constitution should urge their representatives to take action.

As efforts to fully restore U.S. sovereignty proceed, though, the Republican Congress should completely de-fund the UN in the meantime.

Without action, the increasingly powerful and lawless UN will continue seeking to further empower itself at American expense — trampling on liberty and sovereignty in the process.

End Note – The image below shows just how vast the UN is and much is headquartered in the USA. To see a much larger version, click here: