He fails to see the situation clearly.

I wonder if the jihadists of eastern Libya are still “heroes” to John McCain. That’s what he called them — “my heroes” — after he changed on a dime from chummy Qaddafi tent guest to rabid Qaddafi scourge.

See, the senator and his allies in the Obama-Clinton State Department had a brilliant notion: The reason the “rebels” of eastern Libya hated America so much had nothing to do with their totalitarian, incorrigibly anti-Western ideology. No, no: The problem was that we sided with Qaddafi, giving the dictator — at the insistence of, well, McCain and the State Department — foreign aid, military assistance, and international legitimacy. If we just threw Qaddafi under the bus, the rebels would surely become our grand democratic allies. 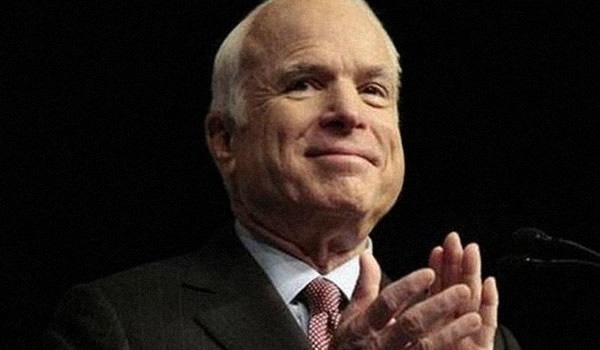 This, of course, was a much more sophisticated theory than you’d get from lunatics like Michele Bachmann. Sit down for this, because I know it’s hard to believe anyone could spout such nutter stuff, but Bachmann actually opposed U.S. intervention in Libya. She claimed — stop cackling! — that many of McCain’s heroes might actually be jihadists ideologically hostile to the U.S. and linked to groups such as al-Qaeda in the Islamic Maghreb (AQIM), the terror enterprise’s North African franchise. She even thought — yeah, I know, crazy — that if Qaddafi were deposed, the heroes would get their hands on his arsenal, ship a lot of it to AQIM havens in places such as Mali and Algeria, and maybe even turn rebel strongholds such as Benghazi into death traps for Americans.

Good thing we listened to McCain, no?

This week, while the guys the senator and the Obama administration aligned us with in Libya (and would like to align us with in Syria) were busy taking Americans and other foreigners hostage in Algeria, in addition to using Qaddafi’s arsenal to fight the French in Mali, McCain was working his magic in Cairo.

An unfortunate hiccup: McCain and his entourage, including fellow Libya hawk Lindsey Graham, showed up on President Mohamed Morsi’s doorstep just as it was revealed that Morsi, while a top Muslim Brotherhood official in 2010, had inveighed against Jews, calling them “blood-suckers” and “the descendants of apes and pigs” and claiming it was incumbent on Egyptians to “nurse our children and our grandchildren on hatred” toward them.

Thank goodness Morsi was able to explain to McCain that his remarks had been “taken out of context.” I mean, you can see how that could happen, right? You’re making a few benign remarks about perpetuating hatred for enemies you describe as subhuman and all of a sudden they’re calling you an anti-Semite. Why, next thing you know, they’ll be saying Morsi could be an Islamic supremacist who is hellbent on imposing a sharia constitution on Egypt when he’s not otherwise rolling out the red carpet for Hamas and demanding the release of the Blind Sheikh!

Not to worry: McCain & Co. have promised to go to bat for Egypt’s swell president. Sure, he has imposed a sharia constitution just as crazies like Michele Bachmann predicted the Muslim Brotherhood would do if it took power. That would be the same sharia that, less than two years ago, McCain condemned as “anti-democratic — at least as far as women are concerned.” Back then, McCain was warning that the Brotherhood had to be kept out of the government if there was to be any hope for democracy in Egypt. After all, he explained, the Brothers “have been involved with other terrorist organizations.”

Now, however, McCain says he will push for American taxpayers to fork up another $480 million for Morsi. Or, to be accurate, borrow another $480 million. You see, the United States is already so deep in the red that a $16.3 trillion debt ceiling is not high enough. In fact, we’re such a basket case that our debt-service and “entitlement” payments alone put us in a quarter-trillion-dollar deficit hole even before we borrow and print another trillion-plus for such ancillary expenses as the Defense Department, the Obama family’s vacations, and the $80-odd million that funds “democratization” programs at McCain’s International Republican Institute. But hey, no problem — what’s another $480 million on top of the $2 billion–plus the Obama administration has already extended to Morsi’s regime . . . to say nothing of the sizable U.S. taxpayer chunk of the $4.8 billion IMF loan the Brotherhood government is also about to get its mitts on?

Naturally, “extremist” conservatives like Michele Bachmann are wet blankets when it comes to this gravy train, too. Get this: She thinks that when you get to the point where you have to borrow in order to pay the interest on the loans you already can’t pay off, somebody needs to cut off your credit line — not inflate it by another two or three trill. Even more daft: She thinks that if you subsidize an organization, like the Brotherhood, that promotes sharia and Hamas, you’re apt to get more sharia and more terrorism.

But look, that’s the kind of passé thinking we’ve come to expect from Bachmann. She’s the one, you may recall, who had the audacity to argue last year that it might not be a good idea for the secretary of state to keep as a key staffer a woman who worked for several years with a notorious al-Qaeda financial backer whose “charity” is formally designated as a terrorist organization — indeed, worked with him at a sharia-promotional journal he founded and in charge of which he put her parents, Muslim Brotherhood operatives (the surviving one of whom runs an Islamist organization, the International Islamic Committee for Woman and Child, that is part of an umbrella entity called the Union for Good — a designated terrorist organization run by Sheikh Yusuf al-Qaradawi, the notorious Muslim Brotherhood jurist).

Congresswoman Bachmann was acting on the obviously irrational belief that Muslim Brotherhood influences in our government might lead to pro-Islamist policies detrimental to American security and interests — as if the State Department might tell pro-American Egyptian military rulers that they should stand down so the Brotherhood could take over; as if the Obama administration might order that information about Islamist ideology be purged from the materials used to train our intelligence agents; as if the Brotherhood, even as it counted its American aid dollars, would impose sharia, prosecute its detractors, and green-light the persecution of minority Christians.

Such insane, Islamophobic scaremongering! Insane enough that McCain, between praising his Islamist “heroes” and championing ever more funding for Islamist Egypt, made certain to lambaste Bachmann on the floor of the Senate over her concerns about Brotherhood infiltration of our government – leading other influential Republicans to follow suit. And now, aping that display, People for the American Way — “PAW,” the outfit created by a hard-left Hollywood icon to smear Robert Bork and derail his Supreme Court nomination — is campaigning to have Bachmann booted from the House Intelligence Committee.

There is a war on over the course of American foreign policy and the security of the United States. The Left has aligned with the Brotherhood — some naïvely relying on the fiction that the Brothers are not the enemy vanguard, others seeing the Brothers as comrades in the quest for a utopian, post-American future. In opposition, the GOP can either continue looking to McCain for leadership or rally behind Bachmann the way the Left always circles the wagons around its stalwarts.

Anyone want to bet me on which way the Republicans will go?

— Andrew C. McCarthy is a senior fellow at the National Review Institute and the executive director of the Philadelphia Freedom Center. He is the author, most recently, of Spring Fever: The Illusion of Islamic Democracy, which was published by Encounter Books.