Editor’s Note – Perhaps one of the more egregious ways to demean the Oval Office is to talk like a street thug while wars loom on the horizon, the economy and personal worth are at a nadir, jobs are non-existent, world finances are at the brink of collapse, and our troops in Afghanistan are being killed by those pesky Taliban and a thankless Hamid Karzai doesn’t apolgize, Obama does.

Class is the hallmark of the Oval Office, yet we have a Chicago thug, a community organizer demeaning our processes while apologizing overseas. That is not class, and dignity is not a needed asset apparently. Decorum is gone and ‘street cred’ is in! Are you proud? 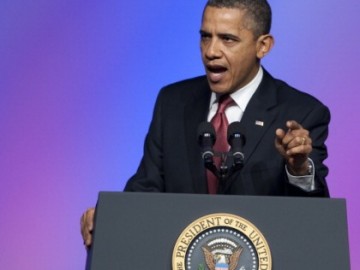 By Jake Tapper and Mary Bruce

As Michigan Republicans headed to the polls Tuesday morning,President Obama delivered an aggressive defense of the bailout of the auto industry and his presidency in general, harshly criticizingGOP frontrunner Mitt Romney – though he never mentioned him by name.

“I’ve got to admit, it’s been funny to watch some of these folks completely try to rewrite history now that you’re back on your feet,” the president said to a raucous crowd at the United Auto Workers Convention. “The same folks who said if we went forward with our plan to rescue Detroit, ‘you can kiss the American automotive industry goodbye.'”

In a November 2008 New York Times op-ed titled ” Let Detroit Go Bankrupt,” Romney wrote, “If General Motors, Ford andChrysler get the bailout that their chief executives asked for yesterday, you can kiss the American automotive industry goodbye. It won’t go overnight, but its demise will be virtually guaranteed.”

In a boisterous, excited tone, President Obama continued, criticizing Republicans who said “the workers made out like bandits in all of this; that saving the American auto industry was just about paying back unions. Really? I mean, even by the standards of this town, that’s a load of you-know-what.”

Campaigning in Grand Rapids, Mich., earlier this month, Romney said the bailout was ” crony capitalism ,” arguing that President Obama had “gotten hundreds of millions of dollars from labor bosses for his campaign. And so he’s paying them back in every way he knows how. One way of course was giving General Motors and Chrysler to the UAW.”

As part of the GM bailout’s complex arrangements, a UAW-owned trust was given a 17.5 percent ownership stake the car company (now roughly 10% as stock has been sold) in exchange for various concessions including the union taking responsibility for health care costs of retirees. The president today argued that with reduced hours and pay, some worker rights relinquished, and roughly 700,000 auto worker retirees seeing a reduction in health care benefits, workers indeed gave things up in the bailout.

The visit was an “official” presidential event, not campaign-related, but the odd dynamic when the president took the stage to chants of “Four More Years!” after which a labor official told the crowd, “This is not a political event.”

That seemed a questionable assertion, given how the president continually referenced Romney, defending how his moves to save GM and Chrysler demanded change and accountability. “The other option we had was to do nothing, and allow these companies to fail,” the president said. “In fact, some politicians said we should. Some even said we should ‘let Detroit go bankrupt'” – another reference to Romney’s New York Times op-ed.

The crowd booed at that reference.

“You remember that?” the president said to the crowd that clearly did. “You know him?”

“Think about what that choice would have meant for this country,” the president said. “If we had turned our backs on you; if America had thrown in the towel; GM and Chrysler had gone under.”

The president used the event to not only reject Republicans referring to labor unions as a special interest group, he painted his support of the industry as part and parcel of his campaign platform: “”This notion that we should have let the auto industry die; that we should pursue anti-worker policies in hopes unions like yours will buckle and unravel – that’s part of that same old you’re-on-your-own philosophy that says we should just leave everybody to fend for themselves….We can’t afford to go back. Not now….The economy is getting stronger. The recovery is speeding up. And now is the time to keep our foot on the gas.”

Without directly asking the UAW workers to help his re-election campaign he said, “I’ll promise you this: as long as you’ve got an ounce of fight left in you, I’ll have a ton of fight left in me.”